I never thought I’d say I was glad to be in stinky Bangkok, but after just over a week in Cambodia I was delighted to be back. The journey out of the country was unsurprisingly not as advertised. Highway 6 isn’t in fact tarmac’d, and after three hours of bumping along a dirt track the driver got lost and we ended up going cross country for half an hour before he found his way back onto the fabled Highway 6. Stepping across the border back into Thailand was a real eye opener. The contrast between the two countries wasn’t as great as India and Hong Kong, but the fact that you can stand in one country and see the other perhaps makes it more real.

We spent three days in Bangkok doing some shopping and changing flight details. We had a one night experiment with Beer Leo, and were surprised to find that it gives a worse hangover than Chang. Luckily in the five weeks since we’d last been in Bangkok a Burger King had opened at the end of Koh San Road. A mushroom double swiss was the only medicine that had any effect on Floss’s monster hangover.

An overnight bus ride and two hour boat journey got us to the island of Koh Samui. It’s the biggest of the Thai islands and much more developed than we were expecting. We spent two days living in a hut on the beach. Alas, the island paradise image was totally spoiled by the enormous amount of rubbish that gets washed onto the beach at each high tide. Lots of plastic and glass. Also on our beach everything closed by 10 o’clock. I’m sure you can imagine the distress this caused us.  We had one day of lovely weather and then the heavens opened on the second day. Undeterred by this minor set-back, we hopped on a moped and did a tour of the island. I can’t say that we found much of anything on the island that made us want to stay much longer really. We found an Irish pub and consoled ourselves with Guiness, Kilkenny, shepherds pie and fish and chips. Because, as every traveller knows, you can frankly have enough of rice and fizzy beer.

After Samui, we spent the best part of a very sunny day on a boat chugging to Ko Tao. Much smaller than Samui, this really is an island paradise. Beautiful beaches, loads of small beach bars that stayed open way past 10 o’clock, and sunsets that just took our breath away. We had a top time here, scuba diving most mornings and spending the afternoons perfecting our tans and snorkeling with sharks. The best dives sites were Sail Rock, Chumpon Pinnacles and South West Pinnacles. The sites closer in tended to have less life and much worse vis. Best dive guide was definitely Greg, who makes up the letter ‘G’ on Bianca’s special “Love Alphabet”. Worst dive guide was Alan, who identified a leopard shark with two remoras as being a whale shark nursing two babies.  Oh dear.  The evenings were spent drinking with fellow divers Lucy, Sam, Vasco and lots of other people that Lucy dragged off the beach to eat with us. Well, we were drinking, everyone else seemed to be on a diving course and under the impression that drinking and diving is a bad combination. Despite our instructor qualifications they refused to believe that diving is the best cure for a hangover. 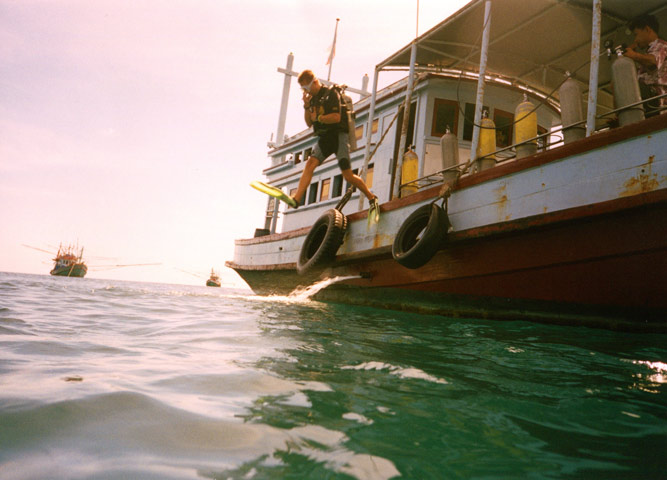 We spent ten days on Ko Tao and enjoyed every one of them. There’s loads of building work going on though and we’re not sure how long it’ll be before it ends up like Samui. There’s no real infrastructure on the island and the pollution from tourists making the island distinctly scruffy, and killing the coral and the fish. 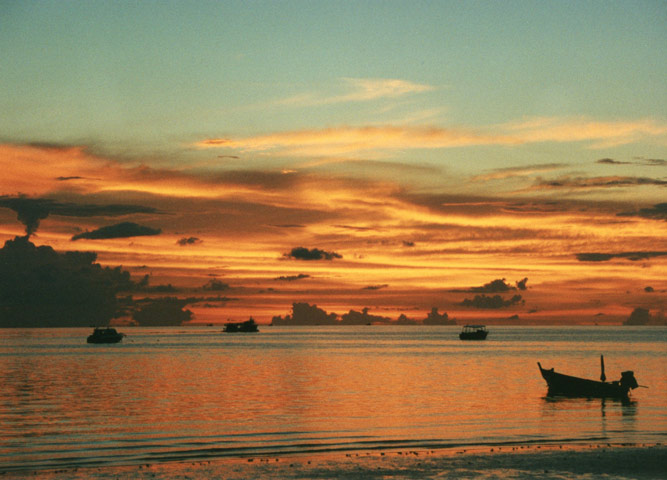 After Ko Tao we chugged south to Ko Pha Ngan to meet our friends Salty and Kate who were travelling from Australia. By the power of the internet and a fair bit of luck, we arrived at the same bar on the same beach within thirty minutes of each other. There were two accommodation options on our beach. There was the luxury resort with spanky huts, swimming pool and jacuzzi. And there was the budget option, with average huts and an excellent view of the beach. Kate, being a high class bird, had set her heart on the spanky resort. The rest of us (Salty and Kate were travelling with Kate’s brother Phil and his girlfriend Nicky) overruled her and we checked into the budget accommodation. By 9 o’clock the next morning, Kate had used her Jedi powers and we all packed up, walked across the beach and checked into the spanky resort. I’m not sure we’re taking this travelling business seriously.

The spanky resort was so much nicer than the other place, and only a couple of quid extra each night. We made the most of the pool, and it was soon decided that it was Chang o’clock. One swift round of Chang around the pool before adjourning to the jacuzzi for G+T’s watching the sun go down. As if to prove that we all were budget conscious, Dez scampered off to the local shop and purchased a couple of bottles of contraband gin, which lasted about thirty minutes. Another couple of bottles of gin, and one of vodka and we were ready to give the locals a demonstration of top class bombing. At 8 o’clock the staff turned the pool lights off, and we guessed that it was time for dinner. Kate (formally high class bird now sadly a shandy la la) collapsed in her room and didn’t make it out for dinner. Floss and Nicky managed dinner but when a round of cocktails was ordered by the boys they decided to make a strategic withdrawal. And after that I remember absolutely nothing. I’m sure it was still dark when we went home, but that’s about it.

The next day was Songkran, the Thai new year. Now, if we were any sort of serious travellers, we’d have been out with the locals soaking up the atmosphere. However, we’re grownups masquerading as travellers so we spent the day by the pool, making the most of our luxury accommodation.  Pathetic but true.  In fact, we didn’t do much of any serious note for the rest of our time on Ko Phangan. The pool and jacuzzi were just too attractive.

We wished Salty, Kate, Phil and Nicky a sober farewell and headed South to Phuket on the west coast to pick up a liveaboard for a four day trip to the Similan Islands. Phuket was a bit of a shock as we’d expected it to be quite nice really. It’s best described as being like Rhyl with sunshine and lady boys.  Luckily we were only there for a day before boarding Kingfisher, a really nice boat at the bottom end of the Similan price range. It had come highly recommended by Greg the Ko Tao dive guide and we weren’t disappointed. Big enough for twelve, there were only six of us on board. Small but perfectly formed rooms, with the luxury of air conditioning. And the food was top class.

As for the diving, well, it was certainly an experience. As well as turtles, manta rays and sharks we had to contend with massive currents and incredible thermoclines that would reduce visibility from 25m down to about 5m. You could see the thermoclines coming in and they were soon renamed as ‘the yellow fog of despair’. They appeared on all dives, and could disappear as quickly as they arrived. Despite the fog of despair we had a fantastic time. All the dives were memorable and we would definately recommend Kingfisher and the Similans to anyone in Thailand who fancied some diving. I’m not sure that I’d come to Thailand just for the diving though. The country has much, much more to offer. You need at least a month to do the country justice, and even though we spent around six weeks there, there are still loads of places we didn’t get time to see.  The people are incredibly friendly, and getting around the country is embarrassingly easy. Top marks for Thailand. 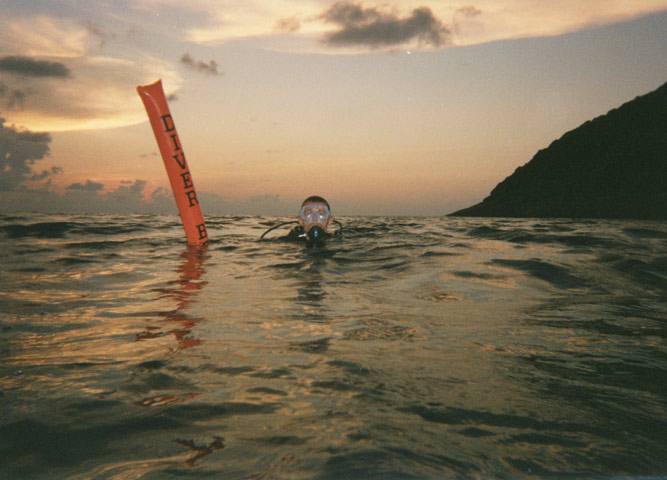 Diving in the Similan Islands