If anyone asked me which bit of the trip was going to the be the scariest, I always answered Vietnam. My only knowledge of the country was what I’d seen on telly. Everything was living up to expectations as the plane landed and taxi’d to the terminal building. The runway is surrounded by rice fields, full of women and children transplanting rice and men using buffalo to plough fields full of water. At one end of the runway are a set of eight open fronted hangers, with a single fighter in each one. All the airport staff wear military type uniforms, and nobody is smiling. You’re counted as you get off and then stand silently in front of a row of military suited immigration officials.

There had been a cock up with Floss’ visa which had taken all of the previous day in Bangkok to sort out, so it wasn’t too surprising that her passport got extra scrutiny. But my heart sank when she was marched away by an unspeaking military sort into a side office. Thirty seconds later she emerged and everyone was smiling. No problems. And in the three weeks that we’ve been here since, that is the only time that we’ve had any sort of reason to feel in the least bit scared or intimidated.

The ride into Hanoi was a real eye opener. The airport is surrounded by rice fields, full of hundreds of workers in pointy hats. After about half an hour, this scene abruptly stops and you enter the outskirts of Hanoi. The city was obviously heavily bombed during the American War, and everything you see has been built since 1975. As a consequence, it’s ugly. And the streets are teaming with people on mopeds. There are over two million mopeds in the city, which means that everyone over the age of ten has at least one moped. And they’re not big on traffic regulations. It is utter, utter chaos. Nothing, not even India, prepared us for the traffic. The Foreign and Commonwealth Office website warns about it, and gives instructions for crossing the road, but until you’ve seen rush hour you have no idea. Everything is carried by moped, people (three per moped is the optimum number, but you can get four adults on at a push), bricks, drainpipes, steel reinforcing bars, pigs (tie their legs together and stack a couple of them on the back), chickens by the hundred, gas bottles, petrol drums… The city is filled with the constant noise of horns. It never stops.

Once you get over the initial shock, which took us about 24 hours, Hanoi is an excellent city. The people are amazingly friendly, the streets are clean. The food and beer is inexpensive and remarkably good if you eat where the locals eat.  We used Hanoi as a base for two and a bit weeks and did several tours around the North of the country. The first trip we did was around Halong Bay. It’s a UNESCO World Heritage Site, and is described as:

“Ha Long Bay, in the Gulf of Tonkin, includes some 1,600 islands and islets, forming a spectacular seascape of limestone pillars. Because of their precipitous nature, most of the islands are uninhabited and unaffected by a human presence. The site’s outstanding scenic beauty is complemented by its great biological interest.”

It’s an amazing place, and definitely best seen by kayak. There are loads of tourist boats that chug around the islands, but frankly they spoil the atmosphere of the place (am I sounding a bit pretentious here?). We had three hard but very rewarding days exploring and meeting the locals who all live on floating houses, which are a bit like large sheds supported by big blocks of polystyrene or plastic barrels. I say hard, it wasn’t actually that hard. And sleeping in a tent on your own private island having eaten like royalty and supped plenty of Tiger Beer definitely helped with the pain of aching shoulders. If you ever get to Vietnam, do the kayak trip through Handspan. Its ace. (http://www.handspan.com/) 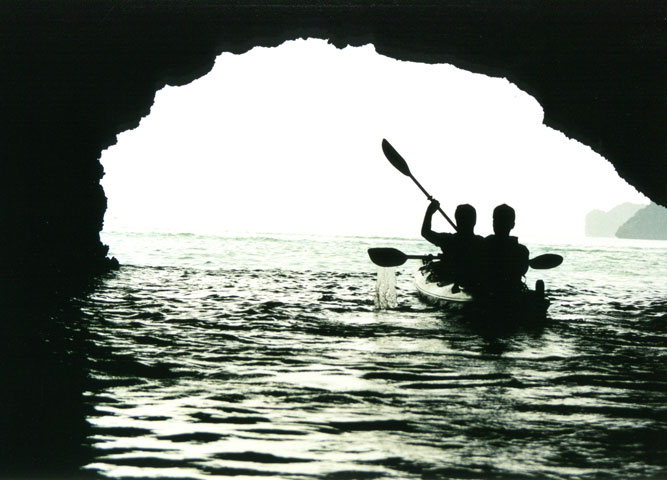 We also spent a day in rural Kenh Ga north of Hanoi seeing how the locals live. Its known as Halong Bay on Land and is possibly more beautiful that the sea bound version. Our guide, Mr Cao, has lived in the area all his life and was an absolute mine of information. 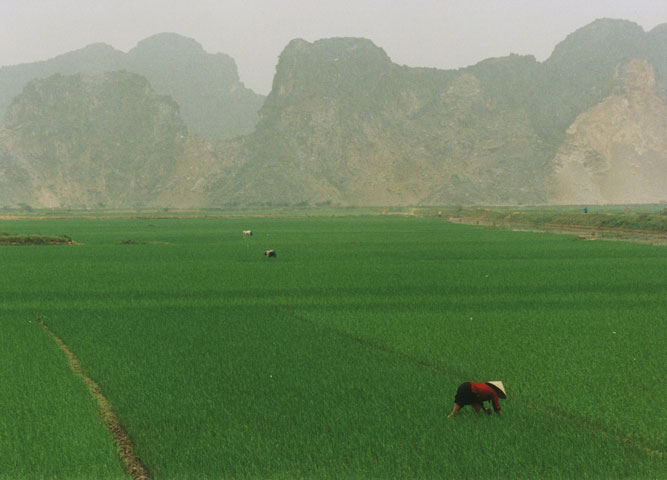 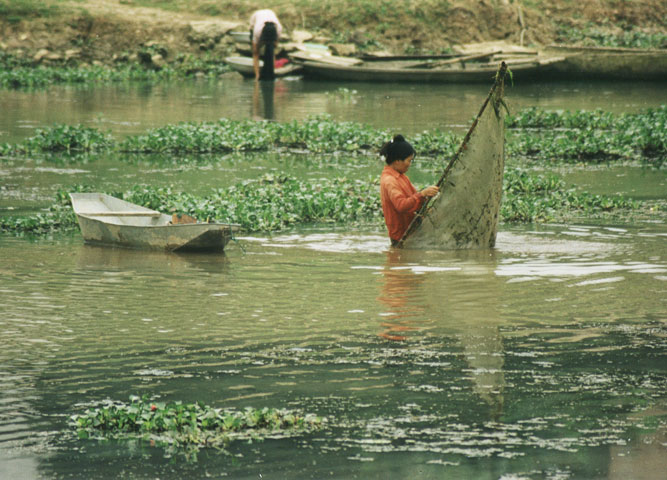 This trip was a bit of a spur of the moment thing as we had a day to kill, but it was the most informative six hours I’ve ever had. We booked it through Et Pumpkin in Hanoi (www.et-pumpkin.com).

The final trip of North Vietnam was to Sa Pa, right up in the far north near the Chinese border. The scenery is quite simply stunning, and none of the photographs we took can do it justice. We spent three days walking 15 kilometres a day, following the path of the river through the valley. The mountainsides have been terraced over centuries by the locals to grow rice, creating a landscape that defies description.

We were there for the last days of the month long celebration of Tet, and we stayed in a different village with a different tribe each night. They’re called homestays, because you stay in the ‘guest bedroom’ (which is really an open patch of floor at the top of the house) of a family each night. Its really terrifying at first as these people live a life about as far removed from what we’re used to as you can get. They speak no English, and frankly, our H’mong, Zai and Tay weren’t up to much either, so you have to communicate through smiles and pointing.

As Tet was coming to an end, the families we stayed with were determined to show us a good time. We had huge, lavish meals prepared for us, and three shots of rice wine had to be downed before we ate a thing to toast health, wealth and happiness (or something similar, we weren’t really sure). The rice wine is all home brewed, so is of an indeterminate strength. It was all down hill once we’d sat down. Suffice to say that on the first night, Dez nearly fell off the ‘patio’ into next door’s garden six feet below whilst gazing at the ‘amazing’ stars, and Floss almost fell into the river whilst turning her bike around. We weren’t invited inside with the menfolk to smoke their special pipe, which was probably a good thing. 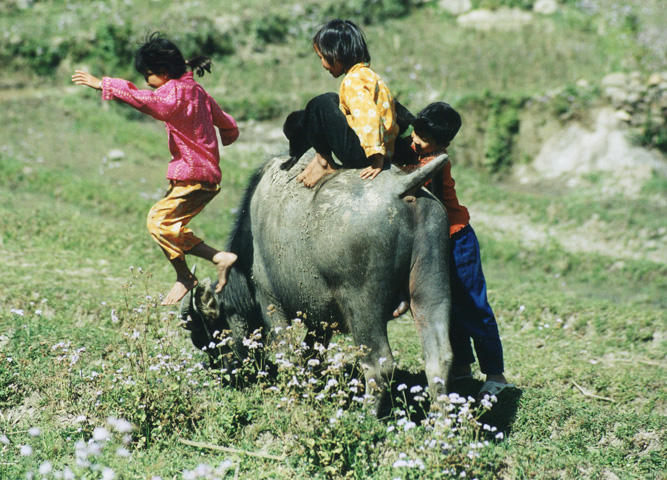 We were worried that we’d let the eco-tourism side down by getting tipsy on the first night, but we later met a bunch of English lads that had managed a litre of rice wine each on the first night. A mammoth achievement, until you find out that they all chucked their guts up. One of them never made it out of the house and used his mozzie net to catch the biggest lumps. 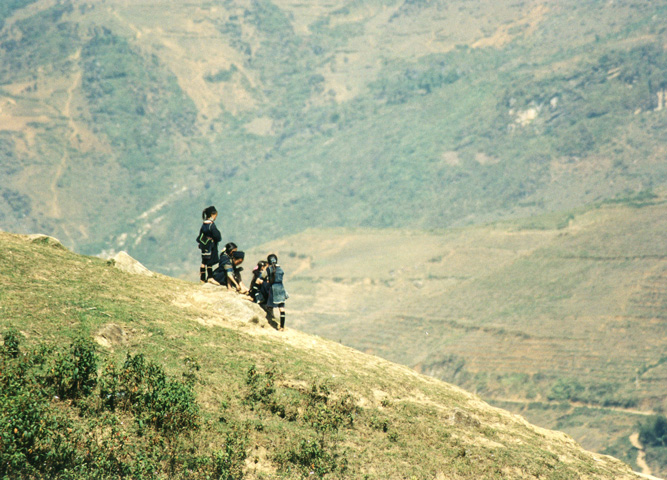 The houses are all made of wood or bamboo, and as you get further down the valley the tribes seem to get richer. The Black H’mong right at the top of the valley are certainly at the bottom of the food chain when it comes to wealth. Their houses are absolutely filthy, the floor is simply mud and everything (especially the old people) is covered in a thick layer of soot. They really look to be struggling to scratch a living on a daily basis. The Zai people in Ban Ho at the bottom of the valley on the other hand live like royalty. Their houses are much larger, and stand on stilts. The animals live underneath the house. The floors are made of bamboo, and everything, including the old people, ducks and pigs are spotlessly clean. We even had a proper squat toilet on the last night.  Positive luxury!

We spent the last day swimming in a freshwater pool on the far side of Ban Ho. Fed by a mountain waterfall it was damn cold, but mighty refreshing in the 38 degree heat. We’re pleased we did the trek, but we did feel really obtrusive turning up at the villages and living with the families. Even though they are paid and we bought all the food for ourselves and the families, it just felt a bit awkward.

We’re off down south next for more adventures!