On the subject of bus journeys from Bangkok to Chiang Mai, the Lonely Planet book says to go on the local bus for the twelve hour overnight journey because it’s more “cultural”. Dez said “B****cks to that!  If I wanted “cultural” I’d go back to India.  I want air conditioning and reclining seats!”. So we took a tourist bus full of backpackers.  And then we checked into the first place we found, mainly because it had a swimming pool.  I’m not sure we’re doing this travelling thing properly.  But it was only 200 Baht (£2.90) a night…honest….

Chiang Mai is much nicer than Bangkok.  It’s the second biggest city in Thailand but it’s more like a medium sized town.  Very laid back. We booked ourselves onto a three day jungle trek to a “non-tourist” area to see hill tribes, ride elephants and go bamboo rafting.

The night before we left we had a group meeting with Manit the guide (immediately renamed Manic).  This was an eye-opener, mainly because he was very, very drunk. The group consisted of Frank and Jenny (spoilt German teenagers, no sense of humour, he turned his nose up at anyone who hadn’t done acid, she constantly had a face like a smacked arse), Trevor and Tamara (Australian, good laugh, tattoo of Michael Jackson on his leg – well, it looked like Michael Jackson), Rachael and Frances (English, very funny, bit blonde, posh), Marcus and Lisa (Swedish, and oh how he loves Sweden and Swedish “snooze” – nasty chewing tobacco stuff – but he’s not addicted y’know, he just can’t concentrate and gets in a really bad mood when he doesn’t have some every other hour, but he’s not addicted, oh no…), Gill (from Birmingham, lovely, never met anyone who’s had so many different jobs, being paid to massage the Tweenies was her best claim to fame!), Liz (also from Birmingham, lovely, amazingly accident prone, shouldn’t be let out by herself, covered in bruises after three days), and two Norwegian girls (didn’t speak to us, but seemed to get on with the Germans and the Swedish). 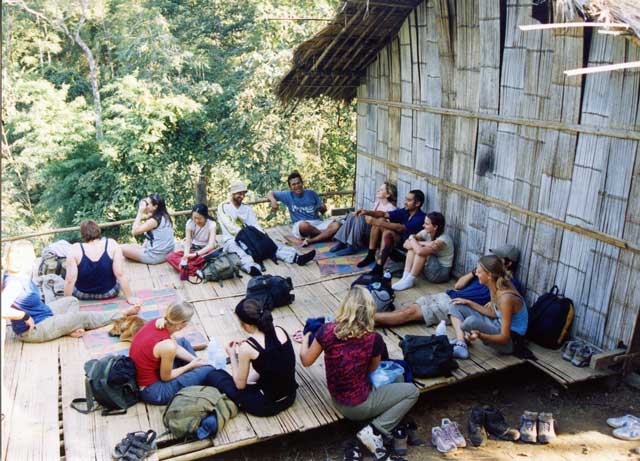 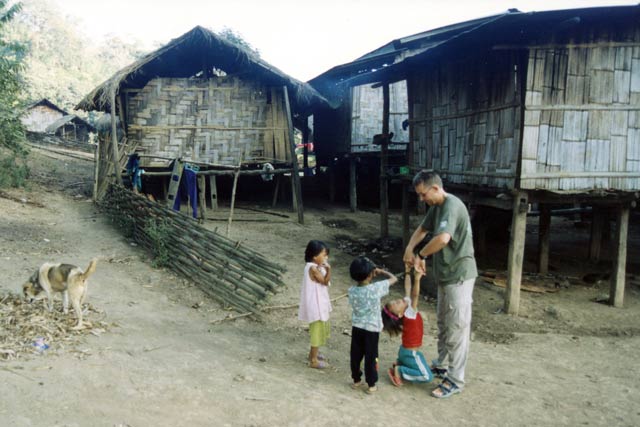 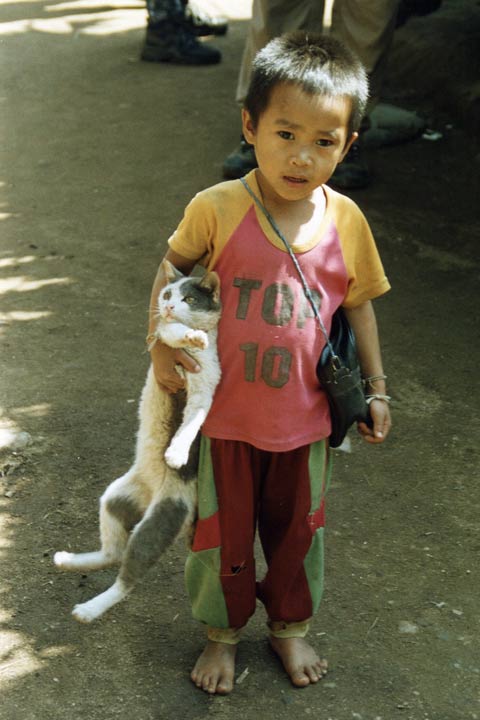 The trekking was easier than Nepal but would have been much easier if it wasn’t for the heat. We had sweat running everywhere within ten minutes.  Very attractive. We walked for two hours on the first day.The night was spent in a hut in a hill tribe village, drinking Chang and talking rubbish while Manic got progressively more drunk on whisky and “had an appointment with Dr. Feelgood”. Dez had a long conversation with him once he’d returned from seeing the good doctor and found out he’s ex special forces, ex heroin addict, alcoholic, diabetic, opium addicted 45 year old with no children (don’t suppose he’s had time!). He’s very funny though, and full of good stories, particularly after a bottle of Thai tea (whisky).

The next day we trekked for a couple of hours, swam in an ice cold waterfall and had lunch at another hill tribe village. Then we got on an elephant and rode through the jungle for an hour.  It was an experience. There’s obviously an elephant hierarchy, and Trevor and Tamara’s elephant was determined not to let ours past so we spent the whole journey on competing elephants, jostling for position. The baby elephant got in the way at one point and was smacked in the head by a bigger elephant for his troubles.  An hour went very quickly, for us at any rate. Not sure what the elephants thought of it.

(2015 note – Even back in 2003 we weren’t comfortable riding on these elephants.  They seemed to be scared of the mahouts and the pointy sticks brandished by the mahouts made us very uneasy.  Nowadays, we wouldn’t ride elephants.  Two days at the Elephant Nature Park outside Chiang Mai taught us a lot about the barbaric and cruel way these majestic animals are trained / broken.) 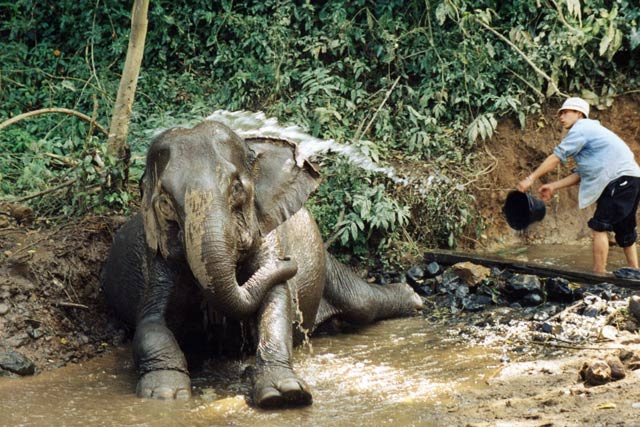 After the elephants, we had another hour’s trekking through some quite rough jungle before arriving at home for the night. A hut like the previous one, only completely in the middle of nowhere. We weren’t sure where the food came from, but after a couple of hours of frantic vegetable chopping with an unfeasibly large machete, an absolutely fantastic feast was laid before us. No idea exactly what was in it, but chicken and pumpkin were the main ingredients.

Apparently the Thai word for pumpkin is ‘f**k’ (sorry mum, but it is, really!), so the rest of the night was spent making lame jokes about being totally pumpkin’d after the days efforts. It was funny at the time, but I suppose you had to be there.

Nobody got much sleep due to the fact that it was absolutely freezing in the hut. After sweating all day in 35 degree sunshine, the temperature plummeted so much that the mozzies couldn’t even be bothered to get up and hassle us. 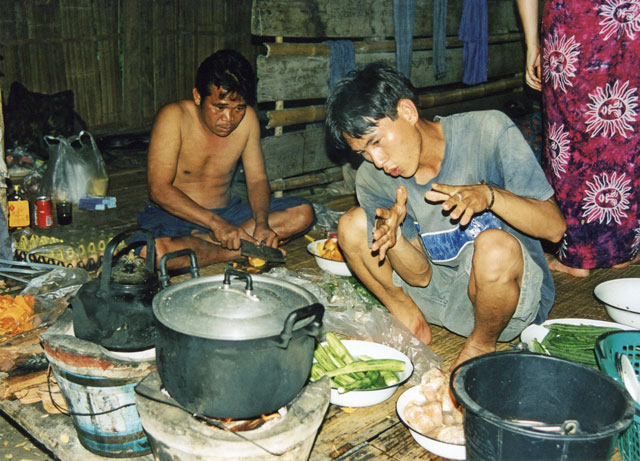 The final day started with many complaints about lack of sleep, but after five minutes in the jungle all that was forgotten. This was the best jungle so far, really thick with just a very narrow, steep trail to follow. The climb up was worth it for the view at the top. Apparently we could see well over the border into Burma, but we’ve no idea exactly where the border was. Very scenic.

Lunch was served down by the riverside, dry gear was dumped in a truck and then it was time for rafting. We had seen pictures when we booked the trip of sensible rafters with life jackets and a couple of guides per raft. However, we were given a bit of bamboo, told to get on a raft and get on with it, which is much more fun. With no instruction we kind of had to work it out as we went along. It’s a bit like punting, on a bit of plywood that sinks. We weren’t very good at it.

Despite one of the guides joining our raft to help, we still managed to crash into anything and everything. We nearly totalled one bridge that we hit particularly hard, and after two hours our raft was utterly pumpkin’d. Everyone else’s raft still looked like new, and ours was in pieces. They obviously weren’t trying hard enough. Baz the guide gave up after an hour and a half and jumped ship. Top entertainment and definitely the highlight of the trip. 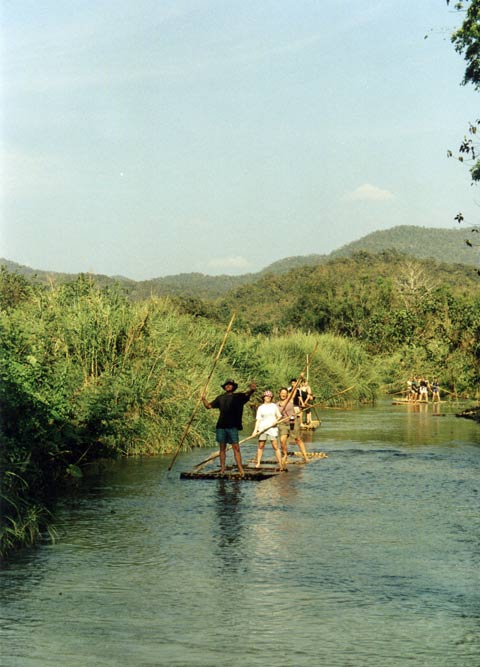 After the excitement of the jungle, the rest of our time in Northern Thailand was lived at a more sedate pace.

We spent a very enjoyable day at a cookery school learning the secrets of Thai cooking. The day started with a trip to the market for a lesson in vegetable identification, which Dez obviously struggled with. Did you know that egg plants actually look like eggs over here? They’re not big and purple like in Tesco’s but are small, green and egg shaped. We also learned how to spot the three different types of basil, loads of herbs and two different types of lime. We didn’t see a single potato at the market and Dez, not being particularly adventurous with food, was getting worried about what lay ahead as we walked back from the market. He needn’t have worried though. Most of the stuff we cooked (everyone has a cooker, and you eat what you cook) was very tasty. The only thing that was a bit dodgy was the salad, which Dez (obviously) didn’t eat.

We had a romantic Valentine’s night at a kick boxing stadium watching people literally kick the sh*t out of each other for a couple of hours. The big fight was between a local boy and a Canadian. The Canadian did very well to last the distance, but the result was pretty predictable. Good job we had splashed out on a couple of bottles of Chang or we might not have enjoyed the terrible show of brutality. As it was, we had a brilliant night and really got into it by the end.

The last day was spent on a moped buzzing around the streets and generally having a good time. We saw all the sights, did some shopping and stuff. There don’t seem to be any traffic regulations but as everyone here is so polite they’re not needed. Everyone gives way to everyone else and tries to keep the traffic flowing. It’s a bit like India, but much, much more relaxed. And you don’t have to worry about the random movements of cows which is a real bonus! The streets are pretty much all one-way too, so driving is a doddle, although Floss had a much harder time navigating as our map wasn’t so detailed.

So, Chiang Mai. Top place. Go there. Go trekking, learn cooking, watch boxing, relax. We had a top time, and didn’t miss the cultural bus trip experience one little bit. We’ll always be travelling in air conditioned luxury in the future if it’s as cheap as it is here.