Mast corrosion –  Why we replaced the mast on our sailing boat

“Of course you don’t need a new mast.  Nobody has ever replaced a mast on an Oyster!”

That’s what we were told over and over again, by rigger after rigger and surveyor after surveyor.  But here we are, many months later, with our brand new mast gleaming in the sunlight.  Over in Sweden, a slab of corrosion-free aluminium was lovingly moulded into an 18m long tube, almost exactly the same as the one we already had, and lowered into the deck of our 1990 Oyster 435 sailing boat.

Why did we replace our mast?

We had dreams of sailing the world with our kids, giving them a fantastic, non-conventional childhood full of freedom and adventure.  So we bought a sailing boat.  A proper hardcore, bluewater cruising yacht.  An Oyster 435.  Twenty-eight years old with an interesting history and only two careful owners.  Actually I’m not sure either of the previous owners where particularly careful, but that’s another story.

The marine survey brought up a few issues but nothing that we hadn’t figured out for ourselves.  We negotiated and haggled so that we would have enough money to fix everything that needed fixing, and kit up the boat for adventures around the world.

Things were looking good.  There was a lot to do on the boat to make her into a liveaboard home, but we knew that would be the case on our limited budget.  We were discovering new problems almost every weekend, but nothing we couldn’t handle with some internet research, a tool kit and a quite a lot of swearing. [the_ad id=”4595″]

By October, it was time to haul the boat out of the water for the winter.  We sailed the boat around to our local boat yard where we would be sanding down and repainting the hull, servicing all the seacocks and having the standing rigging replaced.

Getting the mast out of the boat

Hauling out day was very exciting.  We watched with baited breath as the boat was positioned under the big crane sling thing.  The boat yard men set to work hitching up the mast ready to be gently pulled free from the boat.  The boys had set up a video camera on the rails at the bow to record the event in spectacular time-lapse glory.

The mast, however, had other ideas.  After twenty-eight years of being tucked up in the forward cabin, it didn’t want to go anywhere.   An hour later, it was clear that the only footage we were going to get was the backsides of several hairy arsed blokes as they whacked the mast with lump hammers and swore a lot. 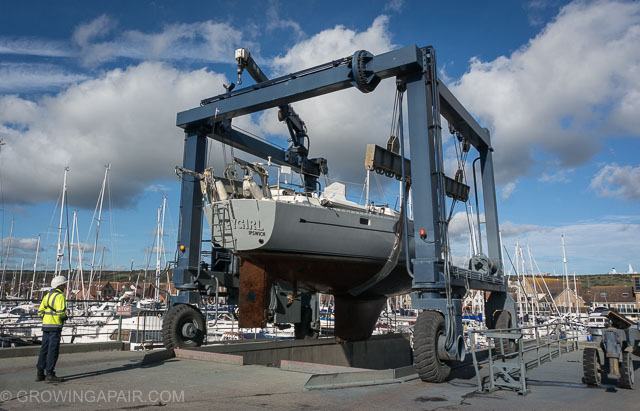 The mast gave in after a fight, swinging alarmingly from the crane and eventually being lowered onto trestles in the boat yard.

That’s when it all went a bit wrong.

Finding corrosion in our aluminium mast

The rigger removed some of the stainless steel fittings from the mast and cleared away the white crusty bits to reveal pitting in the aluminium.  This looked fine to me.  I had been worried about mast corrosion.  I was relieved that the mast hadn’t corroded through and the fittings could just be replaced, with some stuff added to stop it corroding again. 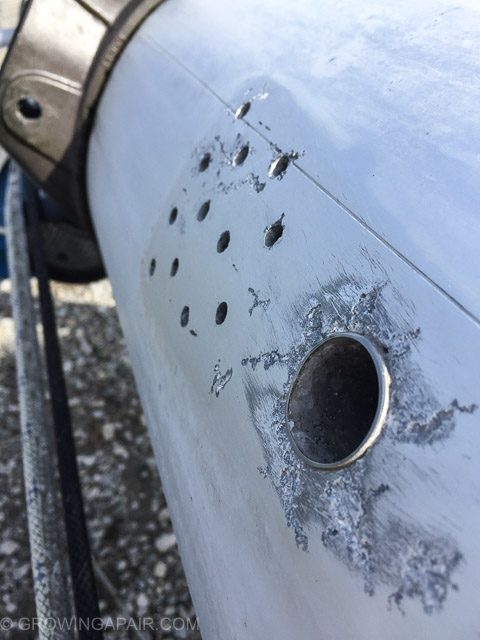 Some of the pitting on our corroded aluminium mast.

But no.  These tiny little pits in the aluminium are a major issue.  I still don’t understand this fully, but I am aware that I’m not a rigger, a marine engineer or even someone who fully understands physics and chemistry.

We had two options.  Patch up the corroded mast or buy a brand new mast.   Neither option is ideal.  Both options broke the budget in a BIG way.

Does our boat really need a replacement mast?

We needed to understand for ourselves why we had to use our whole budget and quite a lot more to replace a mast that looked just fine to us.  So we set about learning about masts and corrosion.  We contacted riggers, surveyors and mast manufacturers for advice.  We sent them photos and video of the mast and that tiny bit of corrosion underneath the fittings.  Most were hugely helpful.  But after the initial shock that an Oyster yacht would ever need a new mast, nobody would commit to giving us an answer.  The riggers we spoke to were up for patching it up, but every single one of them would repair the mast in a different way.  Does the strengthening plate need to go at the base?  Or the top?  Or is that extra hole halfway up the mast the real problem?  Or do we need an internal strengthening sleeve inserted up the centre of the mast?  Each rigger had a different opinion and a different answer.  None of the answers were particularly inexpensive. [the_ad id=”4595″]

The surveyor who carried out our original mast survey was initially very helpful and offered to speak to a rigger about it.  He promised to get back to us in a few days.  Then he stopped answering our calls.  We tried another surveyor who recommended another rigger.  This rigger inspected the corroded mast and told us he could repair the mast for a fraction of the cost that our current rigger would do it for.  His surveyor friend guaranteed to then survey the mast so that we could get insurance.  That sounded fantastic.  Everything was going to work out after all.  And then we found out about the rigger’s reputation and the lawsuits against him for unsafe work.  Back to square one.

Then there was the “If you were just sailing in the Solent then I’d patch it up, but you are off across the Atlantic….with your kids….” issue.  Emotional blackmail?  Maybe, but they had a point.

Why does an aluminium mast corrode?

Brace yourselves.  There’s some science heading your way.   Sailing boat masts are generally made of aluminium and the fittings attached to the masts are generally made of stainless steel.  Aluminium and stainless steel are both metal alloys. If two different metals touch, in the presence of an electrolyte such as sea water, the less noble of the two will corrode.  Stainless steel wins on the galvanic scale, so the aluminium loses the fight and is eaten away.  The white crusty bits on our mast were oxidised aluminium. [the_ad id=”4595″]

Preventing this electrolytic corrosion is easy.  Just stop the two alloys touching.  Simple.  A sheet of plastic, a layer of special paste or some electrical tape will do the job.  Perhaps they didn’t know this in 1990?

If you need help sleeping, more info on galvanic corrosion can be found here.

So after months of stressful deliberation, we made a decision.  Our corroded mast was replaced with a shiny new one.  We can do without expensive luxuries like watermakers, diving compressors and self-steering wind vanes, but we really really can’t sail round the world without a reliable mast. 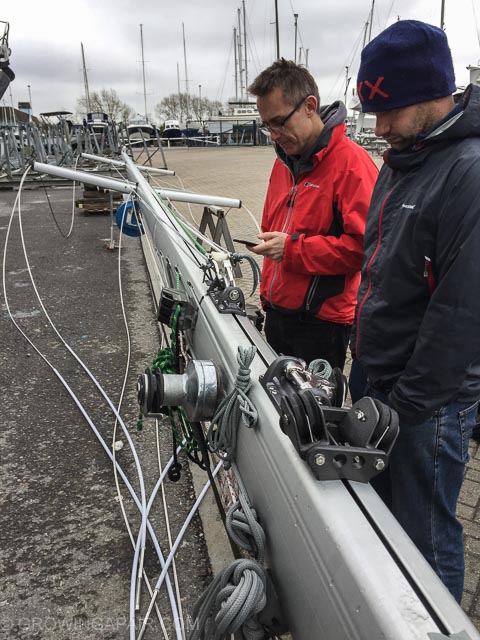 Dez and Uncle Adam checking out the replacement mast on a cold grey January day. Ooh, they do look happy!

I’d like to make it clear that I’m absolutely not asking for opinions on whether we should have replaced our corroded mast or not.  It is what it is.  We made our own decision after lots of research and many, many sleepless nights, but in the end the decision was based on our own peace of mind.  We have no idea if we made the right decision and we don’t want to know.  I’ve written this post because I struggled to find any information about or examples of mast corrosion in sailing boats like ours.  Hopefully our story will help others.

Every corroded mast has a silver lining 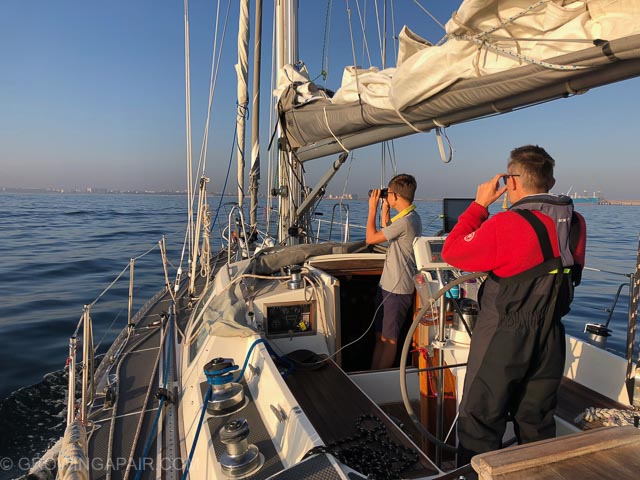 Sailing into Morocco as the sun rises, after a night with the Milky Way and waves sparkling with bioluminescence. It’s not all bad.

It’s not all bad though.  The replacement mast is a thing of beauty!  We had the opportunity to consult with the rigger and change things around to suit us.  The mainsail is sooo much easier to hoist too.

And as I write this, we are halfway through a two day sail from Faro in Portugal to Mohammedia in Morocco.

Our sexy new mast is glinting in the morning sunlight, and we haven’t once wondered if it’s going to fall down in a fresh breeze.  Who needs a water maker anyway??

← Renaming a boat – How we ended up with an awesome boat name!
Starting our Sailing the World Adventure! →