Renaming a boat – How we ended up with an awesome boat name!

Renaming a boat is something that seems to strike fear into the hearts of superstitious sailors everywhere. Apparently it’s really bad luck to change the name of a boat, even if the current name is a bit rubbish. If you are brave enough to anger the gods by changing a boat name, then there are boat renaming ceremonies that have to be performed, rules that have to followed, and alcohol that has to be drunk (ok, so it’s not all bad) before any changes can take place. Neptune or Poseidon or some other god of the seas or the winds has to be stroked, caressed and plied with alcohol. Luckily, I’m not even slightly superstitious.

Unfortunately, renaming a boat in the UK involves the gods of ‘The Registry of Shipping and Seamen’ in Cardiff, who also need stroking, caressing, plying with lots of official paperwork and of course, paying. I couldn’t avoid this one.

Why change the name of our boat?

The time had come to decide on a new name for our boat.  We needed to register her on the Small Ships Register and change the VHF licence and other boring paperwork chores, but we couldn’t do that without changing her name to something less naff.

‘Grey Girl’ had to go.  It was just too dull.  It made me think of the John Major Spitting Image puppet.  More peas, Norma? This will make no sense to those who didn’t live in Britain in the 1990s.

We did briefly consider sticking with ‘Grey Girl’ as a name.  But after several weekends of living on the boat, we found we referred to it as “the boat”.  She just wasn’t ‘Grey Girl’ to us.  The name had to change. 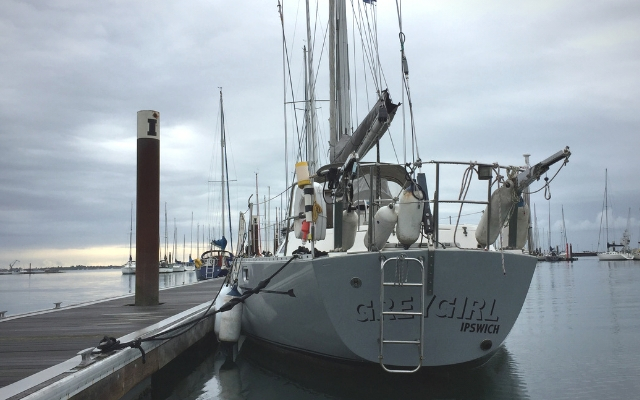 Our boat name had to change!

Our first name idea, which we decided on while backpacking around Thailand when we first came up with the idea of buying a boat, was ‘Adventure Inn’.  A bit like ‘adventuring’ and a bit like somewhere you might enjoy a cold beer on a warm evening.  The boys liked it, but ’Adventure Inn’ just wasn’t right.  It was too much like a pub. I’d gone off it. We would have to think of something else.

Our choice of names for our boat was narrowed down to two. These two boat names were very different.

This is an obvious choice, I think. It makes sense to rename the boat to match our travel blog. Our past blogs have been purely to document our travels for our family and friends. For this adventure we’re also trying to inspire others to get out there and travel by turning our personal family backpacking blog into a travel and sailing blog. As we are on a tight budget, we’re hoping our website might help us to carry on travelling and documenting our adventure by making us some pocket money. We’re trying to be ‘travel bloggers’. Having ’Growing a Pair’ written all over the boat has to help with that, right??

However, it’s quite a long name. That’s not a problem in Britain but in non-English speaking countries we’d sometimes have to spell it out phonetically. That gives you “Golf, romeo, oscar, whisky, india, november, golf, alpha, papa, alpha, india, romeo.”

Also, it’s not a proper name. So we might end up calling the boat “the boat”.

Susan. I don’t know what to say, except…. Susan. This video explains the thinking behind this boat name.

I think you’ve probably guessed  who chose which name by now.  In case you can’t view the video, Dez thinks that, as the boat is big and grey and a girl, then we should name her after Ginormica from the movie Monsters Versus Aliens. He reckons we could repaint her hull in grey with an orange stripe, just like Ginormica’s jumpsuit. Then we could refer to her as “Suuuuuuuusan” like the grasshopper professor dude does in the movie.

Well, it’s short, I suppose. And it’s an actual name. So we would be more likely to be “taking Gappy over to Susan” rather than “taking the dinghy over to the boat”.

After many months and much deliberation, I gave in and we chose Susan as the new name for our boat. I bought new vinyl lettering for the hull. I filled in the online forms and paid the money to change her name and ownership details on the UK Small Ships Registry. Decision made. Phew.

But, no. It turns out that the boat has always been registered on Part I of the Ships Registry, not Part III (the easy peasy Small Ships Registry part).

Renaming a boat in the UK

To rename a boat on Part I of the Ships Registry, the boat name has to be unique. Also, the proposed name shouldn’t be similar to a distress signal, likely to cause offence or embarrassment, or have a clear connection with the Royal Family.

Amazingly, the name ‘Susan’ has been used before. Perhaps there are lots of Ginormica fans out there? It also costs more to change a boat name on Part I of the Registry (obviously) and the name can’t be changed online. Forms have to filled in and boat documents have to be posted to Wales. That seems to be how our boat rolls (pun intended) – if there’s a complicated and more expensive route available, that’s the one we end up taking.

No matter though. We just needed a different name which included the word ‘Susan’. I’d already bought the hull stickers. No point wasting money.

And so to the next complication. To rename a boat in the UK, you apply in writing with several names in order of preference. The people at the Registry will check your choices against current Part I registered boats and your boat will be named the first choice that hasn’t been used before. There is an option to check name choices for availability. An online form can be filled in with three options. After a week or so, someone will email you back telling you that your first name choice is being used but the second one is alright. They won’t tell you about the third choice. So you email the chap back asking about the third name. No reply. You email asking about another name. No reply. You email again asking if you really have to fill in that form again and wait another week and can’t they just have a sneaky look at the boat names list for you? No reply.

You can find the “Check a Vessel Name” form here.

I’d lost the will to live by now, so we chose ‘Susan 53’. The hull number of our boat is 53, out of the sixty-five Oyster 435s built. Surely nobody has named their boat Susan 53. It’s not a massively exciting name but it’ll do. I filled in that bloody form, waited a week and – yippee – ‘Susan 53’ was available!

More information on changing a boat name in the UK can be found in this RYA leaflet.

And then it changed again…

A few weeks later our friends, Emma, Emilia and Bi, came to visit and we took them out on the boat to the Isle of Wight for the weekend. After listening to me chatting on the VHF with East Cowes Marina and explaining that our boat is really heavy and could we please not be rafted up against a little boat that we might squash, Bi said “So she’s FAT Susan then?!”

That’s all it took. Fat Susan was born. 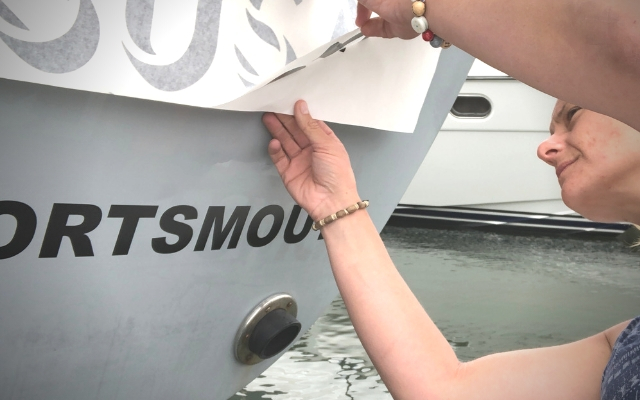 I phoned the Ship Registry people, who seemed highly amused at the request to change the name to Fat Susan. They were due to process the forms that day so we’d phoned them just in the nick of time. I ordered FAT stickers to go with our SUSAN stickers. We changed the name on the VHF licence and other stuff. We even completed a boat renaming ceremony and plied the gods of sea and wind with alcohol. Job done! 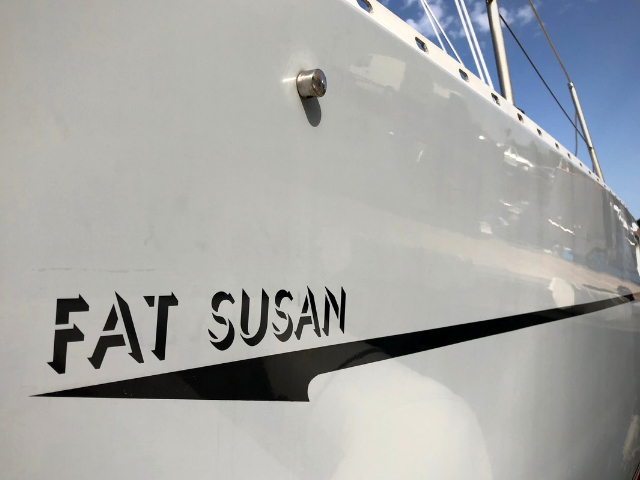 We love our new boat name!

Fat Susan gets looks of disgust from proper sailors and looks of amusement from everyone else. It’s not dull and it’s definitely “us”. When checking in to new countries, officials ask us to write the name down in case they misunderstood. We’ve even had people introduce themselves in marinas because they’ve been following the name on AIS. 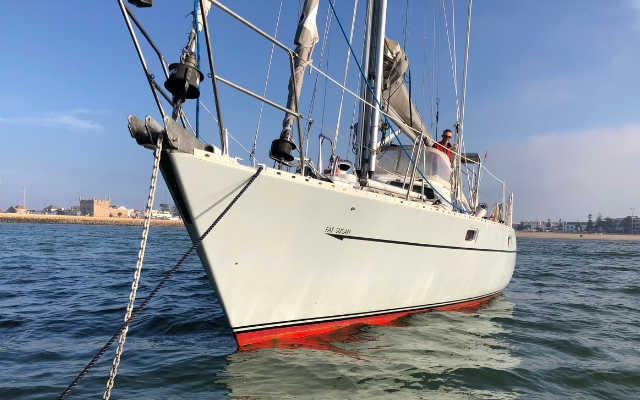 OK, so the name might not suit the boat, but you won’t forget it, will you?!

The only problem we have found is that rude people ask me if I’m Fat Susan (an incentive to lose some weight I guess, but also, who the hell names a boat after themselves??) and funny people ask Dez if he’s Fat Susan (to which he replies “only at the weekend”, obviously).

Our next job is to get some t-shirts printed.  We need an “Of course I’m not Fat Susan! Just look at me!” T-shirt and a “I’m Susan at the weekends” T-shirt.

12 Comments on “Renaming a boat – How we ended up with an awesome boat name!”