Hauling Out Day, More Boat Projects and the End of the Honeymoon

I’d been looking forward to “hauling out day” for about a month. It marked the official end of our first sailing season and would be the start of a new chapter in the book that I’m going to write about all of this when I get around to it (although I said that about the ‘Backpacking Around the World with Kids’ book too). I was full of optimism about all the jobs we’d be able to get done, but also slightly fearful about what we’d find lurking below the waterline when the boat was taken out of the water for the winter.  I was also completely naive about the reality of working on a boat over the winter in the UK.  The steep learning curve and the unforeseen boat projects continue!

The haul out itself was a very pleasant day. The sun was shining and there wasn’t a breath of wind.  Port Solent Marina was a beautiful place to be. The riggers had a little bit of trouble getting the mast unstepped, but it was nothing that a larger hammer and lots of swearing couldn’t sort out. We had set up a video camera on the boat to record the event, but the episode with the hammer means that most of the footage is filled with an image of a rigger’s bum. He had a whole boat to stand on, and he chose right in front of the camera.   The mast was hoiked out of the boat by a massive crane and carefully manoeuvred onto trestles.  Then the whole boat was slowly lifted out of the water in a snug looking cradle. 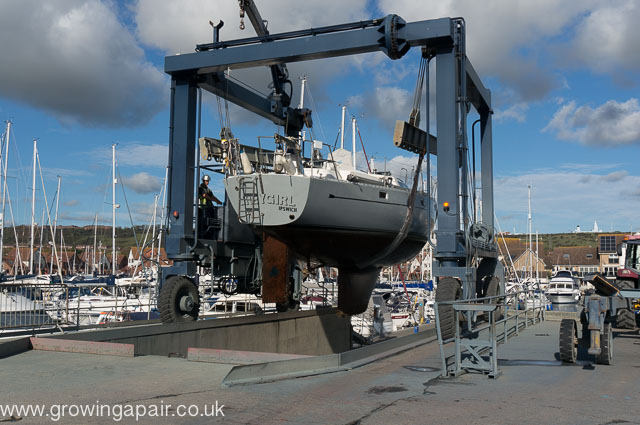 Our floating, mast-free boat, ready to be pressure washed and towed to a carpark for the winter….

Once the worst of the growth had been jet-washed from the hull a quick trot around showed that things weren’t too bad.  The not-furling prop needs some love to get it to furl again. In the battle between the bow thruster and the bow line, the bow line had clearly come out victorious as we only had two out of the three blades left. All of the anodes had been doing an heroic job of sacrificing themselves over the last few seasons.

The first reports on the mast and the rigging were that we had a “tank” of a mast but there were signs of corrosion in the aluminium below the stainless steel fittings.  This would have to be checked out when the mast was off. 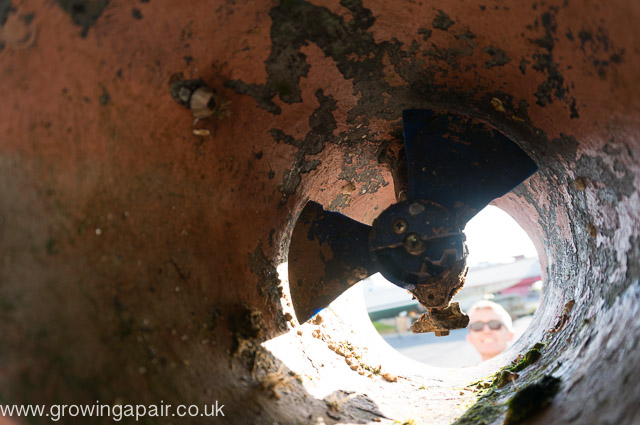 But all in all, it was a great day and the boys loved seeing the boat trundling down the road to its winter home.  We returned home full of enthusiasm for the months of honest graft that were ahead of us.

The boat-owning honeymoon is definitely over

That was in October.  Christmas is now behind us and its fair to say that the honeymoon is well and truly over. Working on a boat over the winter is a bitch. The cold and damp manage to seep through your skin and into your bones. No amount of clothing seems able to stop it.  Just climbing up the ladder to get to the deck, freezes your fingers.  Nothing is easy, and in fact it appears that most things have been purposely designed to make them as difficult as possible.  We’re now painfully aware that BOAT is actually shorthand for “Break Out Another Thousand” and we’ve stopped discussing the actual cost of things, and now only work in “Boat Units”.

Still, rants aside, we have been busy working on jobs that feel like they should be a priority.[the_ad id=”4595″]

We’ve cleaned out the big fresh water tank. 600 litres of shoulder breaking and elbow twistingly inaccessible nooks and crannies full of slime and grime have been cleared out and now look safe enough to use. 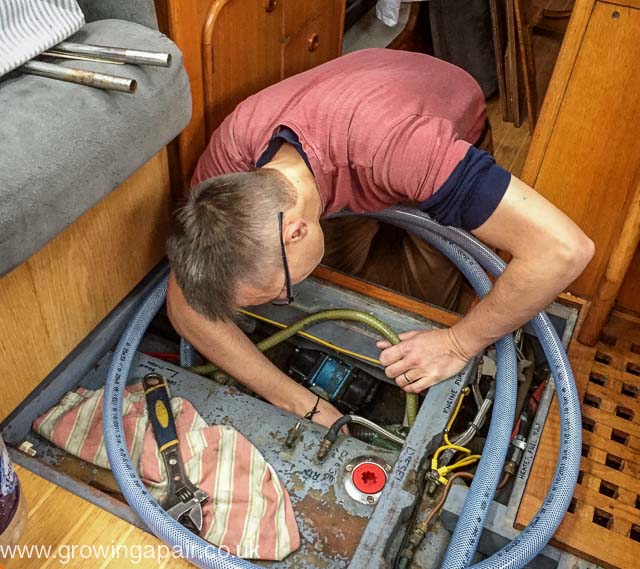 Figuring how the hell you get 600 litres of nasty, chemical filled water back out of the big water tank once it’s clean….

The log wheel blanking plug sits in a hole through the hull when the log wheel isn’t is there. This thing has been stuck solid ever since we bought the boat.  Our speed through the water has been a mystery to us all season as we couldn’t replace the blanking plug with the log wheel.  As soon as we were out of the water, the plug just  pulled easily out of the hole in the hull.  Eh??  This is a bit odd.  I’m not complaining but it really has been stuck solid since we bought the boat.  Anyone got any ideas?

Getting the hull ready for painting

We’ve cleaned and sanded, and cleaned and sanded the hull to get it ready for a new coat of anti-foul paint. This was a bit of a back breaking task as there’s far more of the boat under the water than we were expecting. It’s easy to see why the boat is so heavy. It’s the complete opposite of the Tardis, being way bigger on the outside than it is on the inside. Of course, now it’s too cold to be painting the hull, so that will have to wait till the sun comes out in February, or March, or April… Does anyone have any idea what we do about painting underneath the cradle that’s holding the boat up? 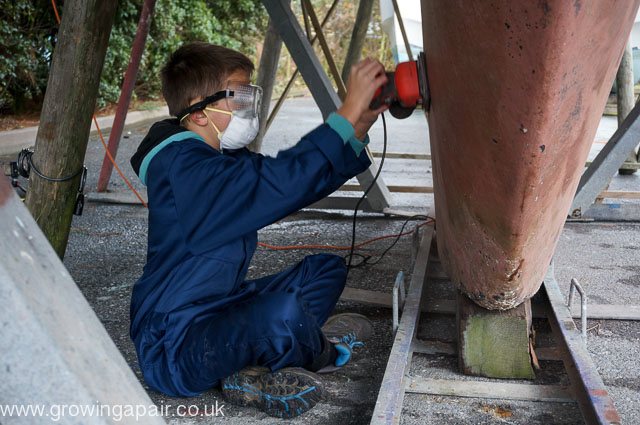 Evan having a go at sanding the keel.

Our next most labour intensive job has been the sea-cocks, the valves that allow water and other less pleasant substances in and out of the holes in the hull. We’ve got hundreds of the damn things (well…fifteen), most of them were seized and all of them have been tucked inconveniently out of the way. 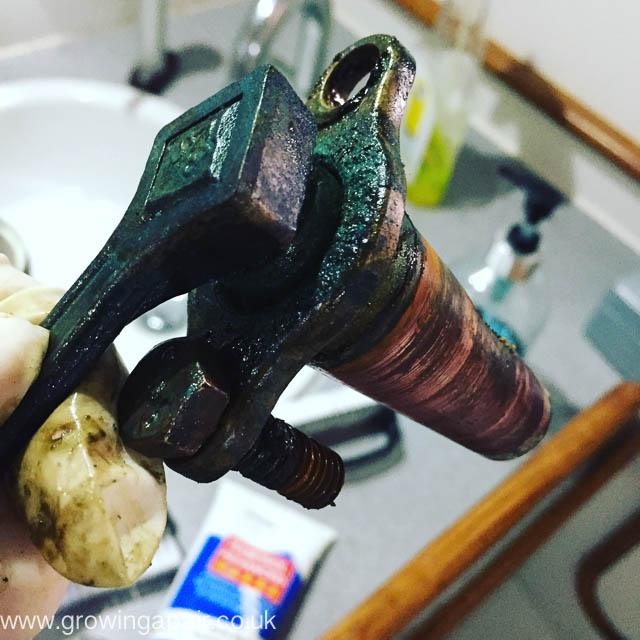 Ooh, I do love a nicely greased seacock. This isn’t one.

I love the fact that sailing courses all teach you to prepare for emergencies by having appropriately sized wooden bungs by each of the sea-cocks. But nobody has explained how you’re meant to use them. Seriously, there’s not enough room to get a bloody spanner in place, let alone to be able to start swinging a hammer around to get a bung sorted out. I’ve had to fully dismantle two lockers to get access to some of the worst ones. In the many hours I’ve spent removing the skin from my knuckles whilst twisted inside a locker I thought I’d stumbled on the perfect money making scheme – modernise the wooden bung by making it out of plastic and rubber. Poke an umbrella type thing through the hole and let water pressure seal it against the hull.  Yay, I’m a genius!  Alas, someone else has already had the same idea. A set of these Seabungs will be appearing under the Christmas tree this year…

One of our scubadiving friends is also a boat owner and an electrician.  He spent a day with us talking through the boat electrics and very handily fitted a couple of extra sockets about the place. Having Andy onboard has been a highlight on what’s been quite a tricky few months. It’s easy to get bogged down with the size of the tasks ahead, and the fact that we really have no idea how to do any of them. Andy’s enthusiasm and experience and general speed was a real boost for our morale and showed us what is possible with a bit of experience and the right attitude. He’s a keeper and we love him![the_ad id=”4595″]

As well as getting on with actual jobs, we’ve also invested a lot of time getting things sorted out for jobs we need other people to help with. Way back at the end of October we got some steel fabricators to get us some quotes for creating a gantry on the back of the boat that we can use to put solar panels on. These came through with eye-watering estimates that were so far out of budget as to be comical. This and a chance conversation with one of the other boat owners has spurred us on to go down the DIY route. Floss has got busy with steel merchant catalogues, tape measures and plastic tubing and has designed us our very own, bespoke gantry.

The steel has been cut, bent to shape and delivered today. And all for the princely sum of £360. Adding in the fittings that we need to hold it all together and to fix it to the deck and we could be looking at getting the whole thing done for around £700. Which is just about 10% of the quotes that we received. Yay! 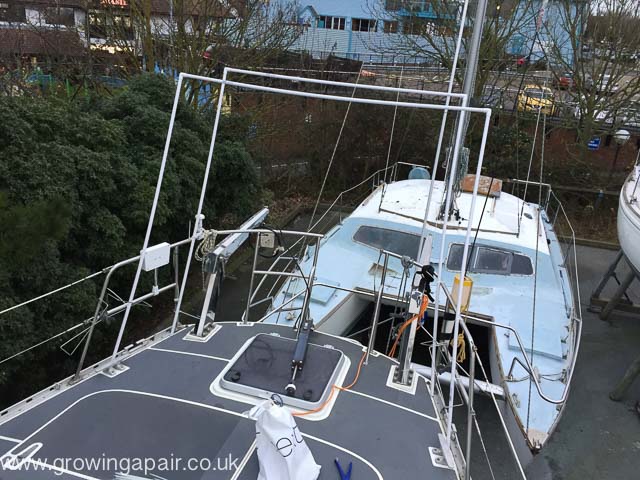 A mock-up of the frame for the solar panels, made out of bits of plastic from B&Q

Making the fridge into a fridge

We’ve investigated options for turning our coolbox back into a fridge, and I think we’ve got that planned out. That’ll be a job we need to get done before we go back into the water as we’re going to install a keel-cooler with the optimistic hope that we experience weather warm enough to justify the extra effort and cash required.  A keel-cooler uses the water on the outside of the hull to cool and condense the refrigerant.  It also costs more and involves drilling another hole in the bottom of the boat.  Not at all terrifying, honest.[the_ad id=”4595″]

We’ve also been looking into changing our cabin to replace the two single beds with one, massively indulgent double bed of ultimate romantic luxury, on a budget. Cost pressures have meant that we’ve foregone the on-suite jacuzzi and steam room but we hope that this will mean that we can afford a new mattress and upgrade our sleeping bags to actual sheets. Who says that cruising can’t be glamorous?

Boat jobs still to do 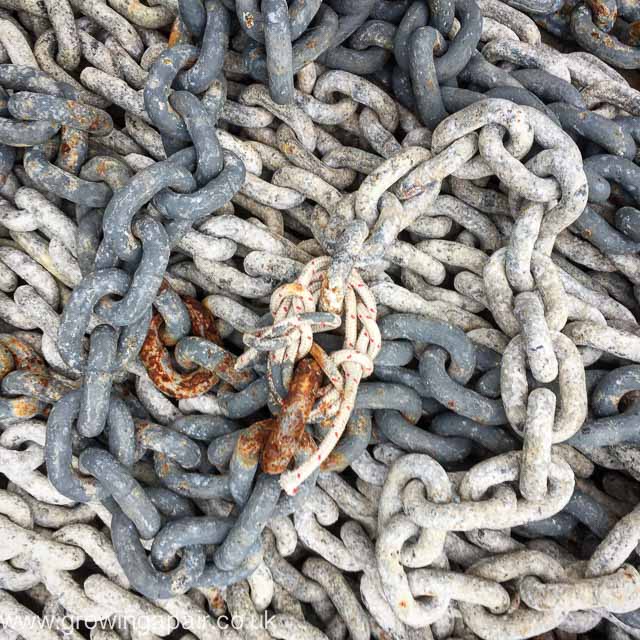 Yes, that really is a bit of string holding our anchor chain together. It’s only 20 tonnes of boat – what can go wrong??

That doesn’t sound like an insurmountable list of things to do before Easter. But for every job we start we seem to be discovering two others that need to be done. It’s going to be a long winter but we’ll get there!

Strongly dislike the cold. Looking forward to getting sailing. Worried about how many of the seacocks will leak when we go back in the water!

2 Comments on “Hauling Out Day, More Boat Projects and the End of the Honeymoon”