Making an Offer on a Boat – Marine Surveys and Negotiation

This is the story of how we negotiated and renegotiated the price of our boat, after getting a marine survey.  It’s a summary of how we searched for a boat, found a boat, made an offer on a boat, had a boat survey done, haggled, negotiated, whinged, cried and eventually, handed over a huge amount of money.  We are now skint and the proud owners of a 43 foot floating money pit.  Yay!  Read on….

How we haggled, negotiated and finally bought a boat

Our ridiculous plan to go on a world-wide family sailing adventure requires a sailing boat.  We looked for the right sailing boat for months.  It’s not easy, you know.  Floating compromises are few and far between on the yacht market.  You can read our rant about choosing the right boat for our adventure here.

Searching the yachtworld.com and boats.com websites became a daily obsession.  Dozens of boats were viewed and discounted as ‘not quite right’.  Eventually, we ended up making an offer on a boat that we knew wasn’t right, but we were sick of looking.  It was a low offer that we didn’t really expect to be accepted.  While we waited for the broker to get back to us, and as a last resort, we decided to go and see one more boat…

This boat was kind of what we were looking for – a blue water capable boat with the right sort of layout and not too far out of our price range.  But it was in Ipswich, a four hour drive away.   Viewing this boat was going to prove to us that we couldn’t get what we wanted for the money we had and we should just buck up and buy the unsuitable but lovely bendy boat that we’d seen.

The other ‘last resort’ boat

While we’re here, we might as well have a quick look at that other Oyster 435.  You know, the other one in the marina.  That cutter rig one that I’ve been looking at online for months but just isn’t right because the aft cabin has two single beds.

I think you can guess what happened next.

We found a boat!

Finally, we had found a boat that was absolutely perfect!  OK, so it was nowhere near perfect but better than anything else we’d seen.  A boat that didn’t have any obvious, glaring problems that were going to cost us a fortune.   A boat that could be tweaked and modified slightly to make it into our home.  We’ll find a way to make a double bed, right?  Awesome! 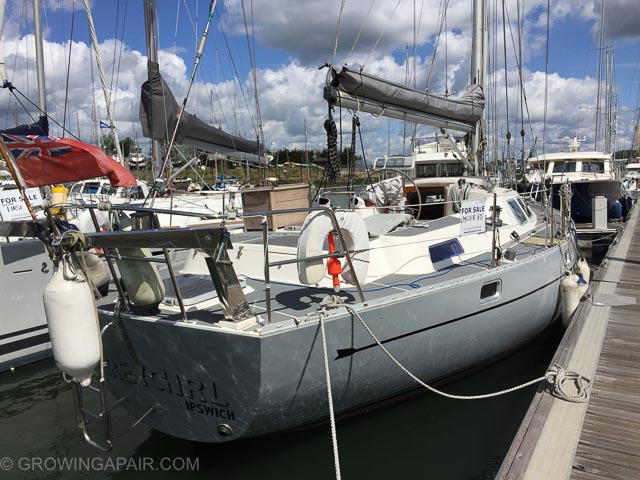 The one we chose. An Oyster 435 cutter rigged sailing yacht.

Negotiating the boat price and making an offer on a boat

After many tense discussions, a few tantrums (from me) and a couple of hours on the phone asking the surveyor questions, we decided to go for it.  But how much to offer?  What was the right price to offer for this boat?

FYI, the boat was on the market for £85k.  We could re-mortgage our house for £90k, but that had to include all the work needed on the boat too.  That money had to get us ready to live aboard and cross oceans.   We wanted to offer a fair price for the boat but we knew it would take some negotiation.

After a bit of intense haggling, we finally agreed on a price of £77k.

There was quite a lot riding on the results of this survey.  The boat survey cost £1050; the £650 marine surveyors fee and the £400 it was costing to haul the boat out of the water for an hour.

Nerves were frayed and tempers short in the Growing a Pair house as our marine surveyor of choice picked his way over our precious boat.  We weren’t there.  We were in Portsmouth and he was in Ipswich.  It was a Thursday and the boat was a four hour drive way.  Sitting in work, I could imagine a man dressed in a deerstalker and smoking a pipe, tapping with his little hammer and tutting a lot.  OK, so I suspect your average marine surveyor doesn’t dress like Sherlock Holmes, but you can see my state of mind.

Also, we like this boat.  It feels right.  We didn’t want it to be a shed. 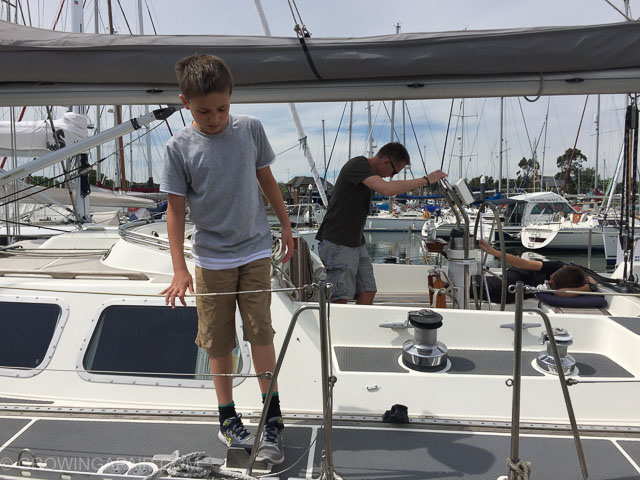 We spent several weekends looking around the boat and asking questions and meeting the owner, before making an offer.

It took another week of nail biting before the surveyor wrote up the report.  It was many pages long but the important bits were summarised at the end.  This is what it said in the summary, in a nutshell.

Grey Girl is generally in a sound condition (yay!) but typical for a vessel of her age (read: old) the services are starting (possible understatement) to show signs of age and wear.  During the course of the inspection, no significant structural defects were detected (huge sigh of relief) but the following points were noted:

1. The top edge of the transom and deck edge are crushed or cracked under the backstay plate.

2.  Service the propeller and at the same time consider replacing the internal propeller shaft seal.

4. Refurbish the teak laid on the cockpit seats.

5. At the end of the season the shroud plates and all of the runner deck loops should be removed, cleaned and re-bedded as required. At the same time the backstay plate should be removed to allow the transom and deck edge to be repaired.

6.  The davit fastenings are slightly corroded and need further investigation.

7.  The rigging is in a sound condition but is coming to the end of it’s serviceable life and should be replaced at the end of the season.

8. The topping lift shows signs of heavy wear and should be replaced.

9. There is some surface veneer delamination to the companionway bulkhead linings and under the deck saloon windows.

10.  There is some softening of the timber below the deck saloon/forward cabin door alongside the mast.

11.   Service all the seacocks as part of a routine maintenance program.

13.   We recommend engaging a marine electrician to inspect and modernise the electrical system as required.

15.  Service all the fire extinguishers and liferaft.

In view of the survey findings and given attention to the points outlined above and within the report, Grey Girl would be considered in a satisfactory condition and suited to her designed purpose for use at sea.

Well, that doesn’t seem too bad, does it?

We knew the standing rigging (that’s all the metal wires that hold the mast up) would need replacing.  The last time they had been replaced was in 2002 the the boat had a full refit.  Insurance companies generally insist the standing rigging is replaced every ten years.  We knew we wouldn’t get away with fifteen years.  And we will definitely be needing boat insurance.

The dodgy teak in the cockpit, the wobbly veneer in the saloon and the useless throttle cable were things we already knew about.  We knew the autopilot display in the cockpit didn’t work.  Our friend Giles had offered to show us how to repair the broken bits of deck, so we should be able to do that ourselves.  Replacing sacrificial anodes and fire extinguishers are both easy jobs we can do ourselves.  Servicing the seacocks (the holes through the hull that let water and waste in and out in a controlled fashion) over the winter shouldn’t be a problem.  A propeller service can’t be that expensive, surely?  And the topping lift is just a piece of rope.

So it was just the shroud plates (big bits of metal embedded into the deck that hold the mast up) and that soft timber near the base of the mast that were the unknown entities in this marine survey.

Ultimately though, the survey told us the boat was in a “satisfactory condition and suited to her designed purpose for use at sea. “  Phew.   Pleased we don’t have to replace the mast! 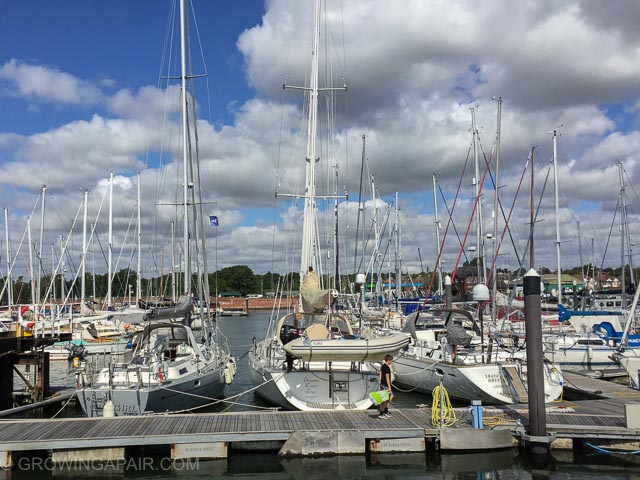 Boats for sale in the marina.

The quote for the work

We were on a high.  The boat wasn’t a shed!  Yay!  There was no (obvious) sign of osmosis (dodgy blisters in the hull showing water penetration –  a bit like finding your house has subsidence).   The deck wasn’t secretly rotting away.  Nothing was seriously broken in a dangerous or massively expensive way, probably.  The relief was huge.  But we still wanted to know how much those chain plates would cost to dig out and put back properly.

So we asked for a quote from the boat yard.  We gave them a copy of the survey and asked how much the work would cost.  It was partly out of interest and partly to give us some idea about how the negotiate the final boat price.

The owner wasn’t overly happy about us asking for more money off the price.  There was a lot of shouting and “throwing his toys out of his pram”, according to the broker.  In fact, I think it was only the skill of the broker that stopped him pulling out of the sale.   That and perhaps the fact that we were kind of his last chance to sell the boat.  It had been on the market for a year and he had almost decided to give up and keep the boat.  If he kept it, he’d have to replace the rigging himself.

So he put his toys back in his pram, we renegotiated and came to an understanding on the final boat price.

That leaves us £20k for all the changes, additions, fixings and replacements we need.  Perfect.  That’ll do.

Hindsight.  That’s what we need.

Lots of mistakes were made in the buying of our boat.  In fact, we’re finding more mistakes on a weekly basis at the moment.

We’ve since found that the owner wasn’t strictly honest about everything.  So I don’t feel guilty about haggling him down to £70k after making an offer of £77k..

Read ‘Five Boat Buying Mistakes We Didn’t Avoid’ to find out what he wasn’t strictly honest about.

We’ve also found lots of other broken stuff that we thought was OK.   All massively expensive to repair or replace, obviously.  It’s a boat, after all.  We are learning all the time though.  We are now intimately acquainted with the internal workings of our anchor windlass (big-assed electric winch with gears and everything).  The over pressure valve on the hot water tank is now Dez’s best mate (until the next time it decides to flood the boat mid-passage) and the boat electrics are slowly becoming less of a mystery and less birdnest-like. 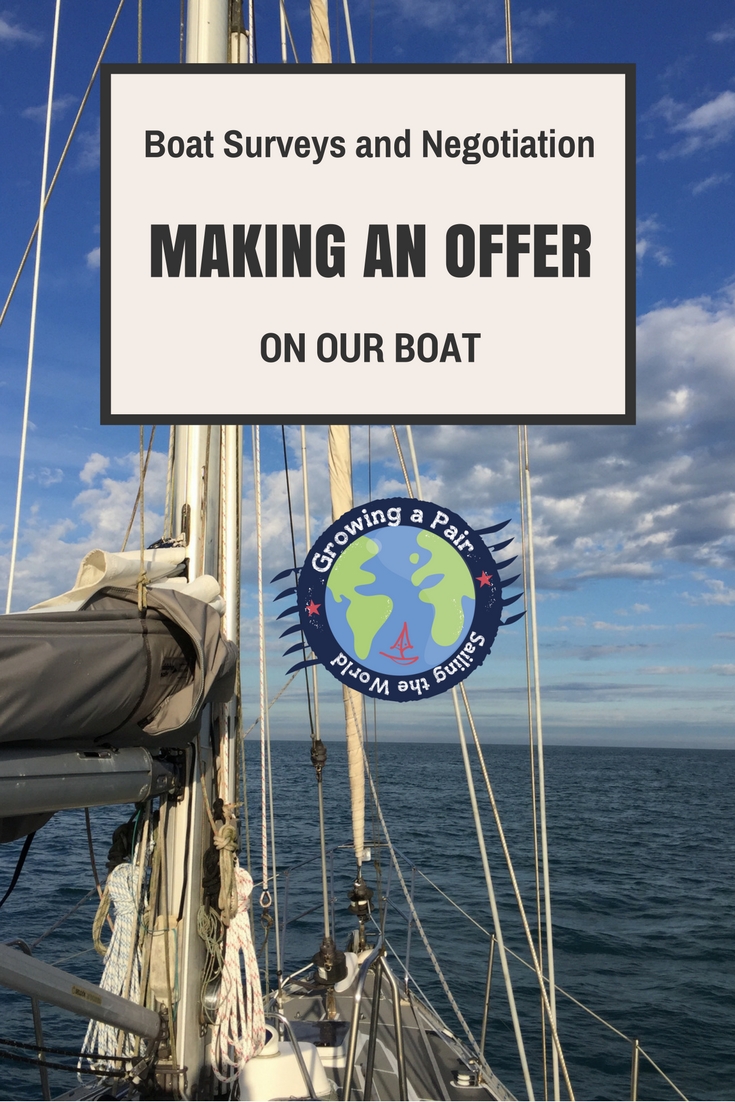 We bought a boat!

Our first weekend on board was fantastic.  The sun shone.  We sat on the deck, chilling, slightly terrified.  What the hell have we done?!

But she’s ours.  There’s no going back.

Let the adventure (and the hard work) begin.