Highlights of India – Feeling The Love For Incredible India

India is a country of highs and lows.   You’ll love it, hate it, or sometimes both at the same time.  I’ve backpacked through India several times, with Floss and with the kids, and I’ve worked there too, but this time was different.  We’ve been to Agra, Delhi, Varanassi and Jaipur.  All awesome in their own way.  All unique and special.  But these are my favourite three places in India as I write this.  This will change in the future, no doubt.  Because India is awesome and awful, all at the same time.

I never thought I’d say this, but I miss India. After the absolutely amazing time we spent in Nepal, knowing how we struggled with the place last time we travelled here, and having spent a minuscule amount of time actually being in India when I was last over there for work I was fully expecting to find our time in India really challenging. It wasn’t a complete bed of roses – I did utterly loose the plot in Pushkar – but looking back, we had the best time imaginable for the seven weeks we were in India.

Indeed, my biggest regret is that with the turmoil caused by the floods, we didn’t get the opportunity to whizz up the East coast a bit, and introduce Floss and the kids to Chennai and everyone I’ve worked with up there for the last eight years or so.

Highlights of Incredible India – Our Top 3

There are so many highlights of our time there, that trying to pick a “top three” is impossible, and apart from Pushkar, I found everywhere to have some sort of magic. Touring Rajasthan was hard work, but as we travelled away from Delhi, the landscape, the people and the architecture all changed and each city held its own fascinations.

The blue city of Jodphur, Rajasthan

I’d have loved to have spent more time in the blue city of Jodhpur.  Walking through the tight, twisting streets of the old town was just a million miles away from anything we’d seen before. And at night time, the whole place comes alive with the sounds of mosques calling people to prayer, the smells of the food being cooked on the street, and the chaos of people coming home from work. We were there just before Diwali, and the kids were introduced into the Indian art of firework throwing, which they absolutely loved. There’s no way they’d see anything like that sort of adventure in the UK, and all the India kids they met were genuinely proud to show off their way of life to the kids. You can’t buy that sort of education. 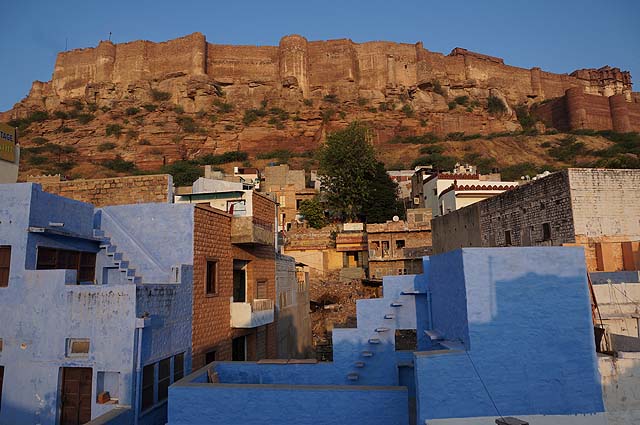 Jodhpur, the blue city. One of our favourite cities on India.

Agonda beach will always have a very special place in our hearts. We planned to stay for four days, but ended up staying for seventeen. We’ve seen a lot of beaches in our time, but I’d say that Agonda is the best beach that we’ve ever had the pleasure of visiting. And who doesn’t love a beach with cows sunbathing on the sand?  We really settled into our time there, and I know that the kids are desperate to get back.

Kerala was a complete surprise. It’s a world apart from the north of India, both in terms of scenery (Kerala jungle vs Rajasthan desert) and the people (almost horizontal in Kerala vs bonkers in your face mad in Rajasthan).

We travelled up into the hill country to visit Chinnar National Wildlife Sanctuary, and spent the most brilliant night in a dusty green shack, listening to rodents fighting in the bathroom whilst sheltering from the biblical rains hammering against the tin roof. It was a real “bush tucker challenge” sort of night.  The kids had a great night’s sleep, but us grownups probably only managed a couple of hours each.

The shack was pitch black, miles from anywhere and completely cut off from the rest of the world. As he left,we were told by the ranger that under no circumstances were we to step off the “patio” until he returned at some point the next morning, and he made a point of showing us how he set the rusty barbed wire to hopefully protect us from marauding elephants. There was talk of gaur (Indian bison) wombling down to the river for a late night drink, and the whole jungle was alive with the sound of night creatures.

When we woke up, the pleasant stream which the kids had been playing by the night before had been transformed into a raging torrent of muddy brown water by the overnight rains. I’ve never seen a landscape transformed in such a short time. 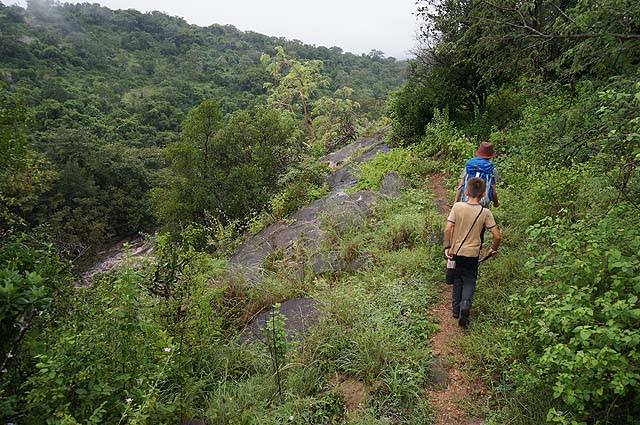 Not easy to organise, or get to, but Chinnar Wildlife Sanctuary is fabulous – at least for the hard core travellers amongst you. No luxury travel here, but wild elephants, oh yes!

Also a complete surprise in Kerala was Munnar. This is a tea plantation town, created to service the needs of the tea workers of the 19th century. We only went there as it’s on the way to Chinnar, but we ended up staying for four days. It’s still proper bonkers India, but the landscape is so enchanting, and the town had such a lovely, relaxed feel about it that we just couldn’t get around to dragging ourselves away. We were quietly pleased when the bus timetables didn’t line up properly, and we had to spend an extra day there on the way back from Chinnar. 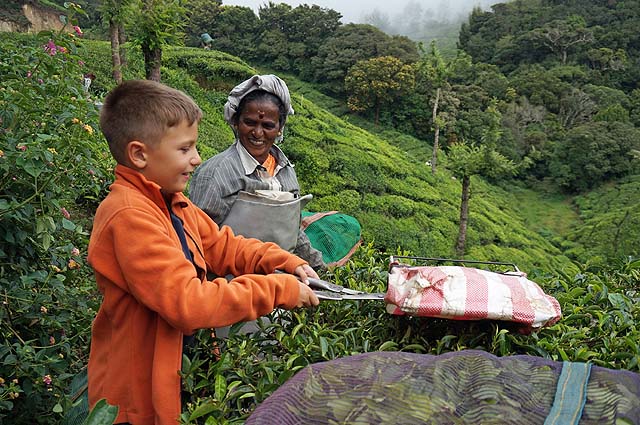 We hired a tuk-tuk to take us on a tour of the hills from Munnar. This lady and her whole family were trimming the tea bushes by the side of the road.

India always gives you more than you expect!

So, those are the four places that make up my India ‘top three’ – which is a nice analogy for a place that always gives more than you expected.

Other highlights included the backwaters of Alleppey,  sleeping in the desert with camels in Rajasthan, a 36 hour journey on an Indian sleeper train, and a road trip through Rajasthan.

You can read all our India blog posts by clicking through to our India page.

The whole country was a complete revelation. We absolutely loved it, and, unlike last time, I’m really hope that it won’t be thirteen years before we return. 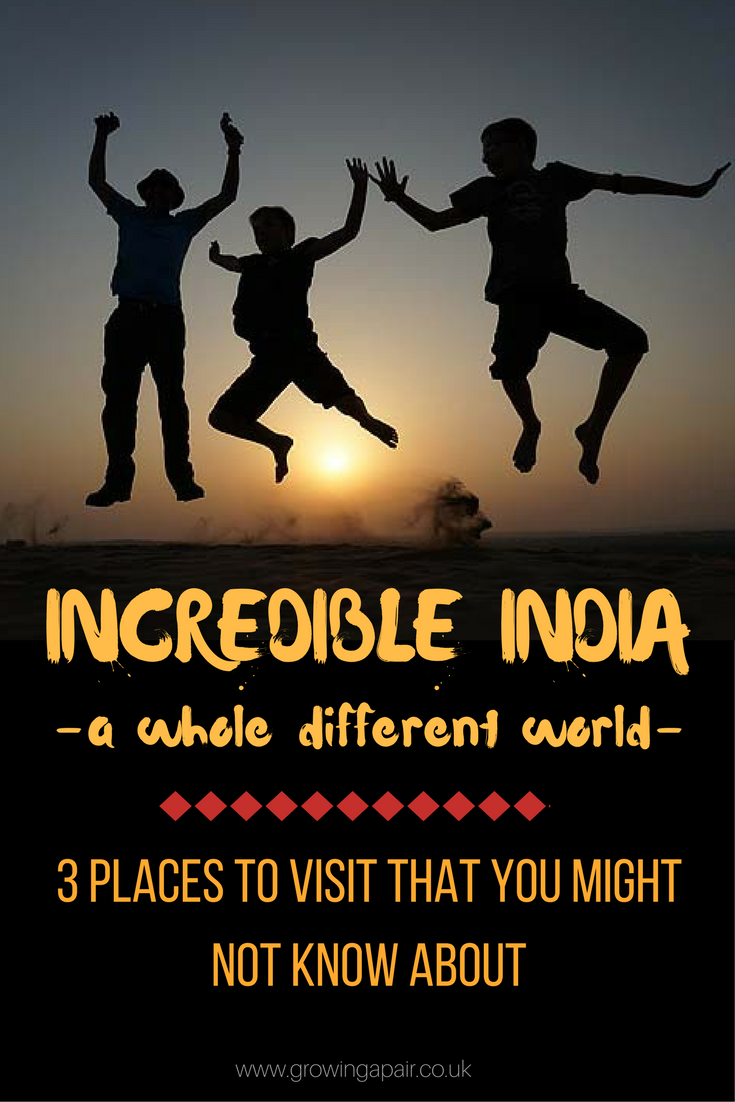