Kolkata, India on the first day of our round the world trip – 2002

We have arrived in Kolkata (formerly known as Calcutta) on the first day of our year long round-the-world backpacking adventure!  It’s quite a culture shock and we are currently wondering what the hell possessed two inexperienced backpackers from the UK to choose Calcutta as their first destination.  What the hell were we thinking??

Indian traffic and getting mugged

We arrived with no problems, apart from not being able to sleep at all on the plane. It took two and a half hours to clear customs, reclaim baggage and get some money changed. Then we had an eye-opening taxi drive into the city for forty minutes. That was a real culture shock.

Cows really do wander across dual carriageways. And the traffic really is totally out of control. Whoever is biggest seems to have right of way, unless you have a louder horn, in which case you can bully your way in front of the buses stuffed to the roof with very relaxed looking locals.  It’s fascinating to watch.  Death seemed certain at several junctions, but it all seems to just work fine.  Kolkata makes Rome look positively pedestrian. 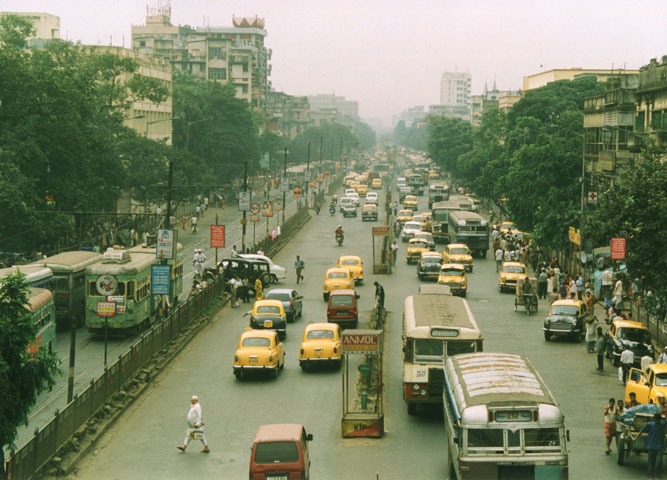 A wet, smog-filled Kolkata in 2002. Quite a culture shock for our first day in India.

It was going well until the driver of our pre-paid Government controlled taxi started saying that the fee we had already paid was just a booking fee, and that we owed him another month’s salary. We refused to pay, at which point he turned off the main road and into a very scary slum. We had a pretty feeble attempt at haggling and he eventually took us back to ‘civilisation’.  He even had the cheek to ask for a tip!  (Looking back, I imagine we looked like fair game, with our clean clothes and fresh haircuts, straight off a plane from the UK.   Fair enough really.)

Floss’s homing pigeon skill came through once we were dropped off at Kolkata’s bus terminal and we found the hotel without any real trauma. The room is big and airy with two very hard beds and our own lavvy and shower, which is nice.

If you feel the need to lock your rucksack to something in your hotel room when you go out for the day, don’t choose the plumbing under the sink, or you may end up with a rucksack full of cockroaches when you get back.  We spent most of the night with Floss standing on the bed, pointing and screaming while Dez ran round the room with a shoe in his hand. 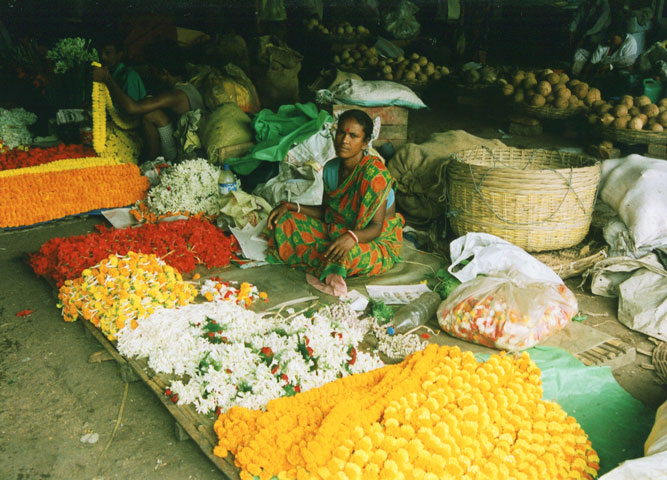 Flower seller in the train station.

The last three days have been spent having a good wander round the city, and queuing to get a ticket to somewhere nice with fresh air and views of countryside – Darjeeling. The ticket buying experience wasn’t as bad as we feared it was going to be. It only took one and a half hours, and we only had to fill one form in. Brilliant. We’re getting the train tonight, only takes twelve hours and we should be in lovely green mountains. 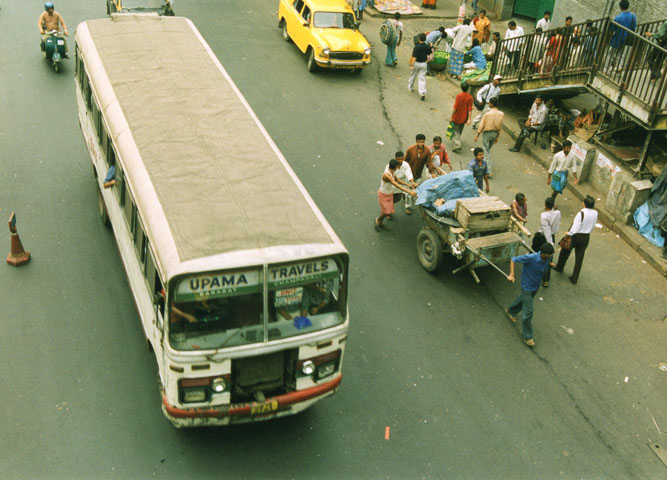 We haven’t done much touristy stuff. We’ve been wandering around soaking up the atmosphere (of which there is a lot, varying from rotting veg to burning rubber to poo) and having a good look around.

Kolkata really is like a different world.  People everywhere, street stalls, beggars, cows in the road, people weeing in the street, rubbish everywhere, people sleeping on pavements, the buses, yellow taxis everywhere, clouds of exhaust fumes, the smell, the noise, the pollution… scary as hell, absolutely fascinating and like nowhere we’ve been before.  The noise is the main thing.  It’s just constant.  Horns are used ALL the time.  It’s shame that you can’t photograph noise!  The beggars are a persistent bunch. The naked one on the way back to the hotel was particularly intriguing.  Most of the locals seem genuinely friendly though, even if they are just trying to flog you stuff.  The food has been excellent so far and we thought we’d got away without any trauma, until Dez’s belly started grumbling half an hour ago. The Imodium might be coming out before we get on the train. 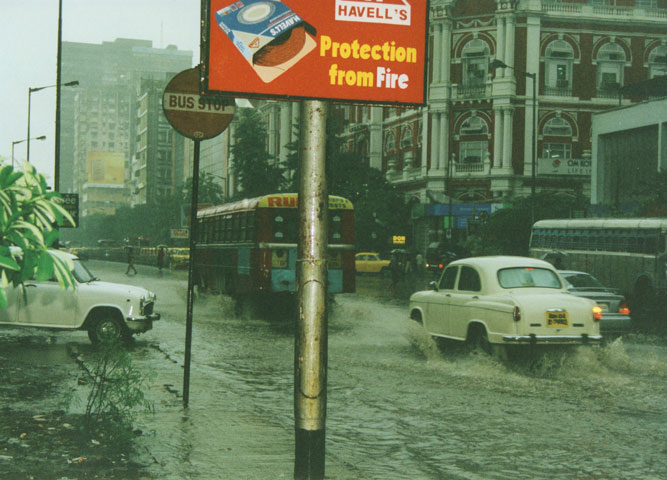 Kolkata after a couple of hours of Indian drizzle.

I think we’ve coped pretty well with the shock of India. Kolkata is an enormous place, with millions of people. It really is relentless. Everything seems to happen at a million miles per hour, but if you watch it for a while, nothing really changes. There’s lots of noise and movement and noise and smells and noise. Oh, and its been absolutely pouring with rain today. Heavier than anything we’ve seen before, even in Wales. And they have a lot of rain in Wales.

Trekking To Everest Base Camp, Nepal →

One Comment on “Kolkata, India on the first day of our round the world trip – 2002”