Trekking To Everest Base Camp, Nepal

What?? Are you mad?? Of course we didn’t get to Everest Base Camp!! Have you any idea how unfit we are??

We booked return flights from Kathmandu to Lukla the night before our rafting trip to the Bote Kose river, after several pints of San Miguel in the Rum Doodle bar. Bit of a spur of the moment thing. OK, so we’re both unfit, and one of us :o) is a touch overweight…but how hard can it be?? And you can’t come to Nepal and not see Everest. Right??

Got back from rafting, packed for trekking, arranged for the nice smiley man at Hotel Potala in the heart of Thamel to look after most of our stuff while we were away, booked a taxi for 5.00am, set the alarm for 4.00am. All going well, everything looking good for tomorrow.

Checked our email one last time. Email from our friend Alex back in the UK:
“Make sure you sort out your trekking permits before you leave Kathmandu. You won’t get past the Ranger station at Jorsale into the Sagarmatha National Park without one.”

Aaarrgggh! What trekking permit? We didn’t see anything in the book about a trekking permit! Bloody hell! It’s 7.00pm and our flight’s at 5.00am. After much panic and running round, we discover that things have changed since Alex was last in Nepal. You now get the permit at Namche Bazar, two days into the trek. Phheeeeew!

Now we’re late meeting our rafting friend Jimmy from Sydney in the Tom and Jerry pub. The plan was to have a few beers and a nice meal in the Third Eye Restaurant to celebrate our awesome white water rafting trip.

Hmmm. No idea what time we got back to the hotel…don’t remember getting back! Jimmy is a very bad influence.  I do, however, very vaguely remember stopping a nasty noise somewhere in the room at about 4.00 am……

Next thing we know, there’s a knocking on the door and the nice smiley man is saying “Hello? Your taxi is outside.” It was 5.15am.

Panic ensued. Bloody good job we packed yesterday. We legged it out of the hotel into the waiting taxi which sped off for the “30 minute” ride to the airport, which took 7 minutes. The taxi was refused access into the airport by the usual armed police, so we waited at the wrong terminal for half an hour before being escorted to the domestic terminal by a helpful airport worker (didn’t look happy with the Rs21 baksheesh he got, it was all the change we had).

Our 7.00am flight eventually left at 9.00am. Possibly one of the scariest flights I’ve ever been on. Eighteen passenger plane, propellers, no door between us and the cockpit, non-existant security. The man clutching his rosary beads and praying for the whole flight didn’t help. Dez could see out of the front windows past the pilots. I couldn’t. But I could see the terror in his eyes as we approached Lukla runway. He said that death seemed inevitable as the side of the mountain filled both cockpit windows. The runway only appeared half a second before the plane lifted slightly and was stalled onto the ridiculously short runway. Those of you who’ve flown to Lukla will know what he means… 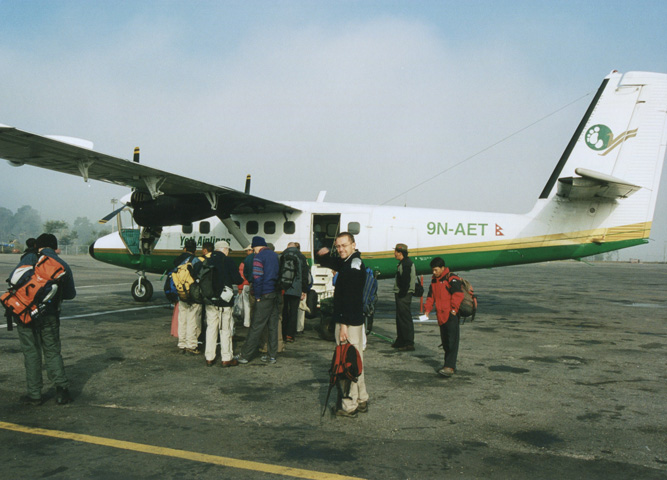 We got straight on to the trail towards Everest base camp, at the same time as a couple of fit looking Australian blokes. And headed for Namche Bazar and that trekking permit. We spent the next six days walking, mostly up hills. The scenery is just incredible. The snow-capped mountains stand out against the deep blue sky. The sharpest, clearest, brightest snow-capped mountains we’ve ever seen. It’s almost as if your eyes have developed better resolution. 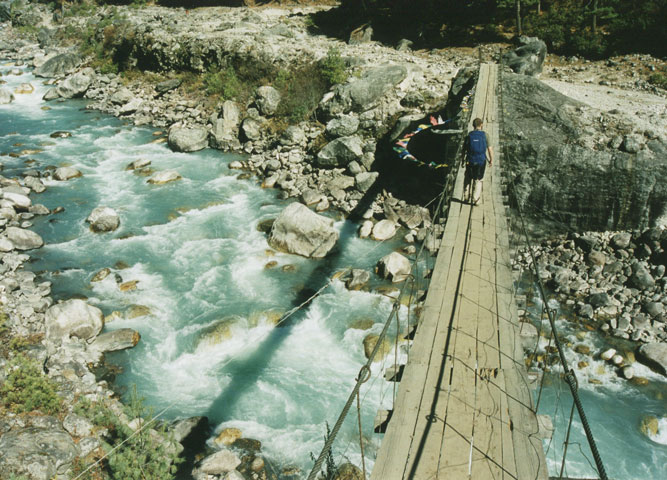 The walking was both exhilarating and exhausting. We went through a whole range of emotions from complete relaxation to being close to tears. We saw mountains, valleys and rivers.  We dodged sherpas, yaks and yak poo.  We stayed in Lodges with no electricity, slept on hard beds fully clothed, ate dhal bhat and yak steak, paid Rs300 for a well deserved pint of San Miguel, said “namaste” a thousand times, crossed scary bridges over milky blue rivers, saw Musk Deer, bouncy rodents, huge birds of prey, water driven prayer wheels, went to a Monastery, learnt which bits of mountain are Nupse, Lohtse, Everest, Ama Dablam….. 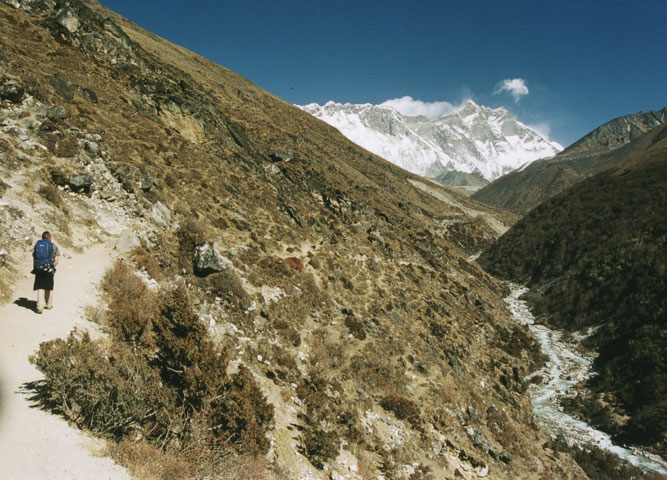 I won’t deny that this was probably the most physically demanding thing that either of us have ever done. There were times when both of us were close to tears. At the top of the 600m climb to Tengboche, Dez said he wanted to find a bed, take his boots off… and then vomit. But we’re very glad we did it. It’s amazing how quickly we forgot the pain as soon as we reached a Lodge or started on a flat bit, or sat down for a glass of hot lemon. 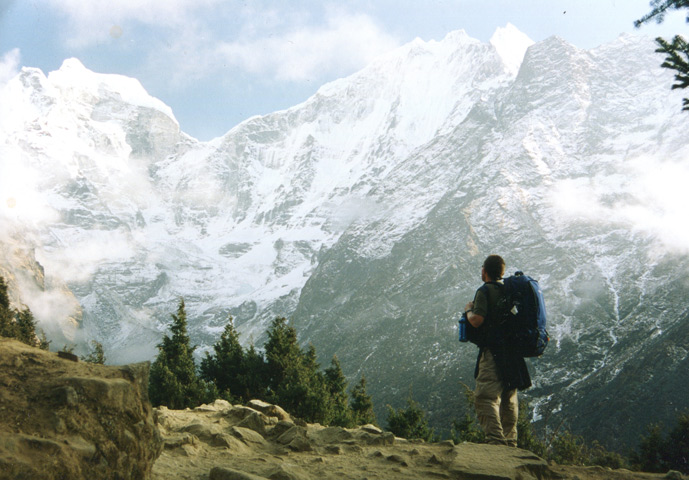 We beat those Australian blokes to Dingboche. And they said they felt like 80 year old asthmatics. They’d bought “power sticks” in Namche but were hoping to get their money back.

We eventually got to Chhukhung (only 600m lower than Everest Base Camp, y’know.) We would have liked to get up to Kali Patthar but, frankly, we’re scuba divers. We like to say at sea level, drink beer, eat curry and do as little exercise as possible.

The walk back down wasn’t easy either. But we made it back to Lukla, confirmed our terrifying flight back to civilisation, ate pizza, and booked ourselves in for a sauna and hot tub! Ho Ho. Absolutely knackered. And minging. But happy. 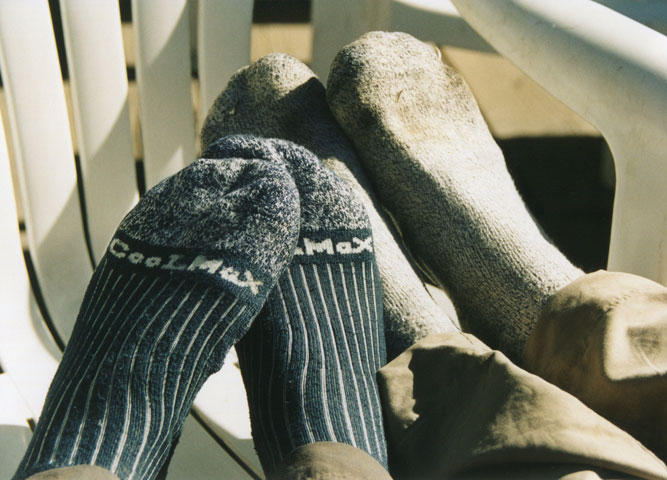 P.S. From next season, you’ll be able to send an email from Everest Base Camp….if you get there…