Songkran in Bangkok. Is it safe for kids?

Songkran, the famous New Year water festival in Thailand, used to be a civilised affair with much gentle dripping of scented water on to the hands of respected elders.  Nowadays though, it’s three days of waterpistol-toting fun and alcohol-fuelled carnage.  Songkran in Bangkok can be quite an intense experience, with thousands of people on the streets.  So is Songkran safe for kids?  We spent an interesting Songkran in Bangkok with our two kids, aged 9 and 11.  Read on to find out what happened and if we’d visit Bangkok during Songkran again….

Bangkok is a fascinating, exciting city. Our two boys have been to Bangkok four times now and it almost feels like home when we get back there. Well, maybe not home, but you know what I mean.  We have lounged around in cafes, toured the temples, whizzed along the river on long tail boats and river ferries and shopped at huge department stores.

But this time was a bit different. This was Songkran, the Thai New Year Festival.

We’ve been travelling in Thailand during two other Songkrans.  One was in 2004, pre-kids, when we met up with friends on Koh Phangan.  That time we couldn’t drag ourselves away from gin and tonics by the pool so saw nothing. The second was two years ago on Koh Lanta, our first Songkran with kids. We were squirted once by a water pistol toting moped driver. That was it.  Not very scary or exciting.

Not much to this Songkran malarkey, is there?

Well, how wrong could we be?!  We turned up to our hotel on Soi Rambrutti (the road parallel to Ko San Road) on the day before it officially started, completely oblivious to the carnage that was about to ensue outside the front door.

That evening and for the next three days, the hotel was completely inaccessible after about midday. Barriers lined the streets to protect the restaurants. ATMs were cling-filmed up. Shops were shut. Police searched people at the ends of each road. 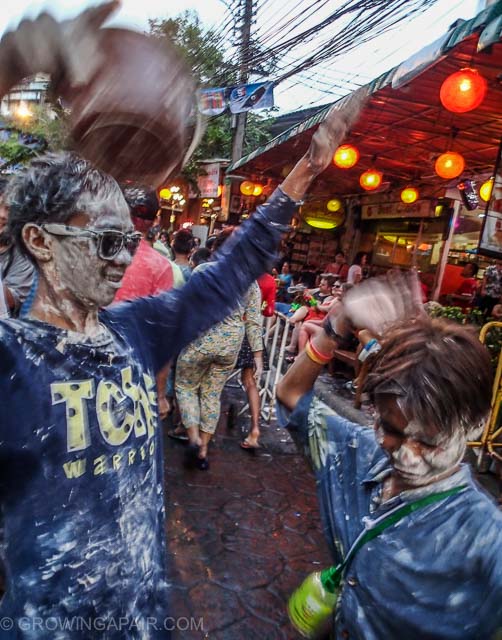 The party goes on all day. These two had clearly been covered in flour since breakfast time!

Soi Rambrutti, Koh San Road and all the roads surrounding them were packed to bursting with sopping wet, flour covered, dancing, drunken, partying Thai people. We couldn’t leave the hotel without wallets, phones and cameras being completely waterproofed. We had no dry clothes left after day two. 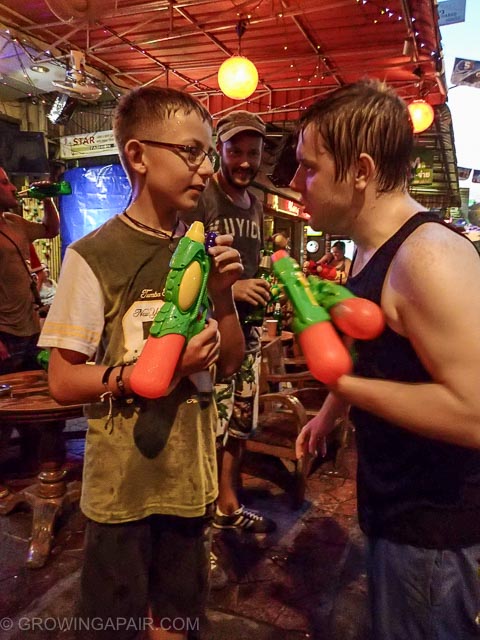 On the first day, the boys bought water pistols and joined in with other travellers and the local Thais, shooting passers by and each other with iced water.  It was all very good-natured and lots of fun.  This turned out to be the day BEFORE Songkran actually started though.  Even on this day, there was no avoiding getting wet through, so we just joined in!  Evan wasn’t a fan of having flour paste wiped on his face for good luck but Sam was in his element shooting people in the face and then getting the locals to fill up his water pistol for free. 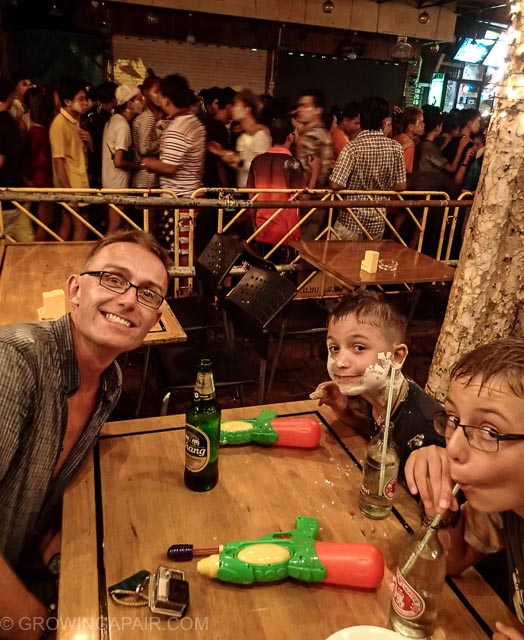 After the sun goes down and the crowds increase, it’s safer to stay behind the barriers put out by the restaurants. This was the restaurant over the road from our hotel. We retreated here when Evan started to get a bit nervous of the crowds. 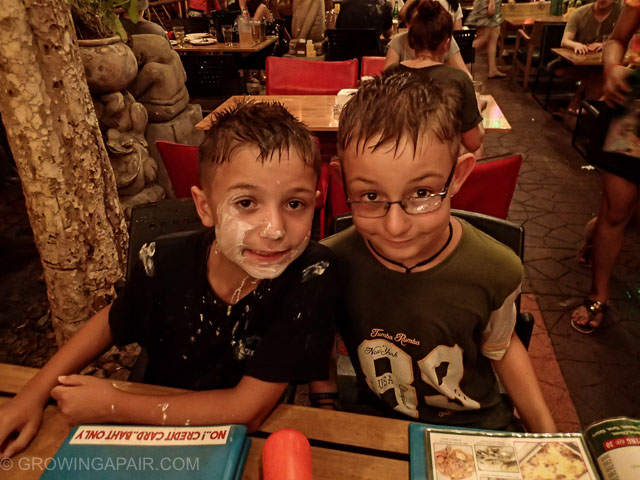 Wet and covered in flour, but pleased to be behind the barrier!

As the sun went down, it was clear that the crowds were building and Evan was getting a bit nervous.  We retreated to the restaurant over the road for food before it all got too manic and watched the carnage from behind the barriers.  By the time we wanted to get back to the hotel (literally just across the road from where we were eating), the road was full of dancing, soaking wet people, crammed in and shuffling along.  We struggled to cross the road.  It was a relief to fall through the hotel door.

On the second morning the streets were empty.  Phew.  So we made the huge mistake of heading off in a tuk-tuk to one of the department stores.

Should’ve gone in a taxi!

People with huge vats of iced water line the streets and throw bucket-fulls at anyone passing, even through bus windows. No-one escapes in a tuk-tuk!  We arrived wet through to our pants and spent a few hours shivering in air-conditioned shops, dripping on the floor.[the_ad id=”4595″]

On the way back at 4pm, the taxi (yes, taxi) driver could only get us three streets away from the hotel.  The streets were packed with wet people toting water pistols and buckets of flour paste.  We shuffled slowly along the tightly packed streets, holding on to one child each, fighting our way through the crowds of bouncing, partying Thais. 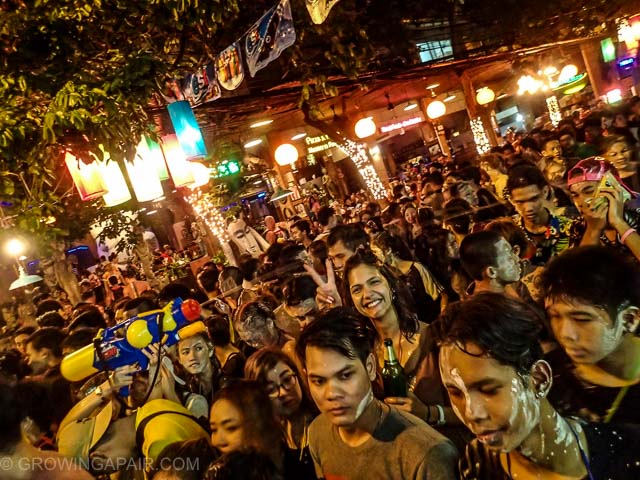 This is the street outside our hotel on Soi Rambrutti, Bangkok. No way in our out of the hotel!

The boys became increasingly scared.  Down every road we would reach a DJ playing banging disco tunes.  The crowd would start bouncing up and down, particularly frightening for the kids.  It took an hour and a half to get to the hotel, culminating in having to lift a terrified Sam and Evan over the barriers to stop them being crushed. Not a pleasant experience and not one I’d recommend.

It was at this point that we realised there was no way that our mums, visiting from the UK, would be able to get to the hotel when their plane arrived at 5pm the next day. Even without massive suitcases, the hotel would be totally inaccessible.  The race was on to find somewhere else within our budget and get there before the party started again.

The mums turned up safe and sound.  We stayed in our new, dry hotel a few streets away from the carnage.  Sitting in slightly damp underwear, we ate dinner overlooking the river like the posh people we really are.  Posh, that’s us.  Oh, ok, so me and my mum may have popped out later on to experience the Songkran carnage….

Click here to watch a video of Songkran fun on Koh San Road at night! 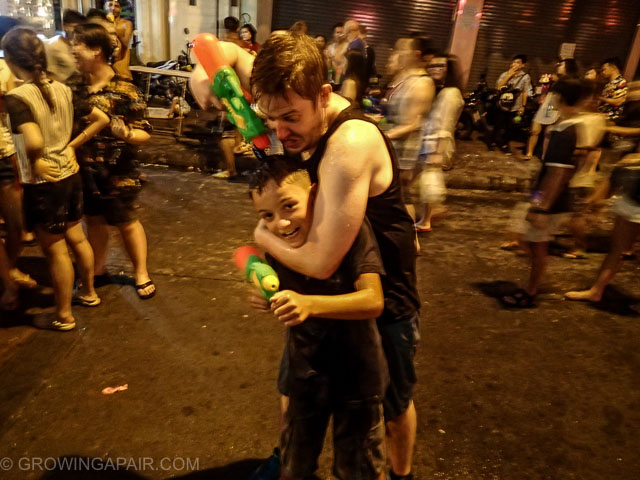 Earlier in the day – lots of fun with other damp tourists. 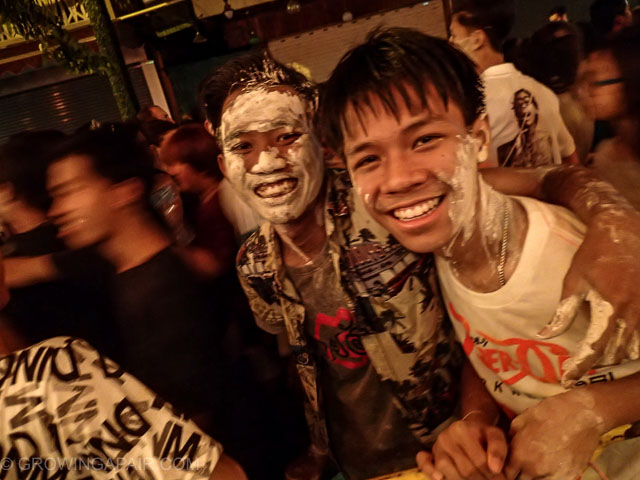 We didn’t see anyone who wasn’t having fun!

So, is Songkran safe for kids?

Songkran with kids is probably as safe as you want it to be.  Hopefully this story will give you a bit of a heads up as to what to expect and what precautions to take.  If you are a twenty year old who likes a party, then it’s perfect for you. If you aren’t, or have kids, then consider  staying away from the Koh San area of Bangkok or hide in your hotel after 2pm. And avoid travelling in tuk-tuks unless you are particularly fond of wet pants.

Tips for Songkran with kids

Most importantly, buy a massive water pistol each and have fun, but we aware of what’s going on around you.  The crowds can build surprisingly quickly and a lot of alcohol is consumed over these three days.  Keep an eye on your kids reactions to water, flour and loud people.

Remember they are kids.  Songkran can be scary if you are 8!

Love Songkran.  Not so fond of wet pants.  Be careful out there, kids! 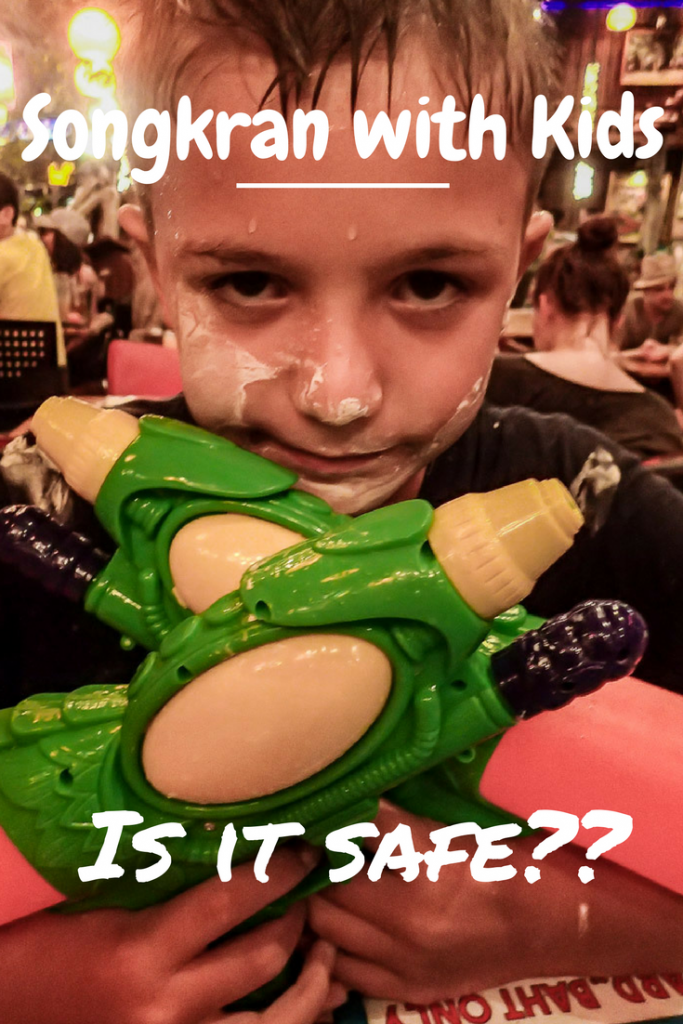 One Comment on “Songkran in Bangkok. Is it safe for kids?”