Zebra Rock Mine and Camping Ground – 1.3 Billion Years In The Making

Zebra Rock Mine and Campground is a fantastic family owned campsite, run by Australians Kim and Ruth with their daughter Opal.  It’s the only place in the world that you can see the unique 1.3 billion year old zebra rock in the ground, and the only working zebra rock mine.  Only a couple of miles down a red dirt track from the main road, you can go on wetland safaris on lake Argyle, experience the mine tour, chill out in the campground and eat incredible fish and chips.  And all while your kids spend hours getting mucky, hunting for rocks and polishing to their heart’s content.   What’s not to love?

When we returned from travelling in 2003, we had grand plans for shaking our lives up and ensuring that we didn’t just fall back into our old ways. We briefly toyed with the idea of combining our passions for diving and the great outdoors.  We looked into creating a business that would allow us to do both. We got as far looking into buying a campsite nestled among the Scottish Islands which already had a dive centre attached. The £2,000,000 price tag and the fear of ruining a passion by turning it into a job killed the idea.[the_ad id=”4595″]

But if had bought that campsite, I’d like to believe that we could have kept the passion and turned it into something as perfect as the Zebra Rock Mine and Campground on the border of the Northern Territories and Western Australia.

We’d bumped into lots of people who had told us that we simply had to find the time to get off the highway and spend some time at Zebra Rock Mine.  As first hand recommendations are always the best, we cruised down the dusty Duncan Road on our way back towards Darwin from our tour of the Gibb River road and booked in for the night.

The camping ground is pretty small with only non-electric pitches, but the warmth of the greeting and the friendliness and relaxed feel of all of our fellow campers immediately won us over. Bruce, our camping trailer, was parked and our camp was set up within ten minutes.  Our first beer for over two weeks was savoured as the sun started setting. Just perfect. 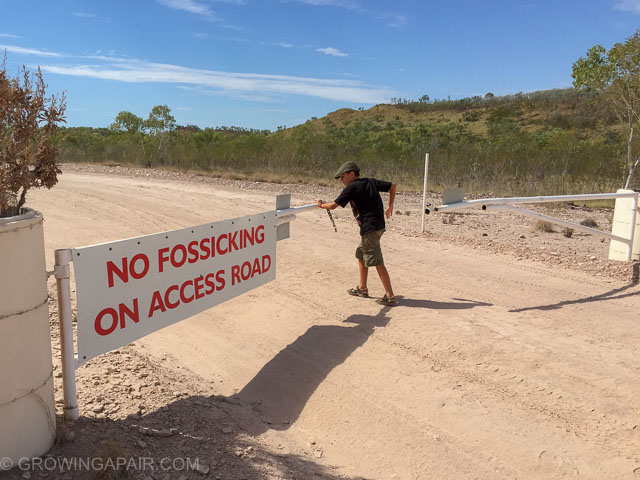 So what is Zebra Rock?

The campsite takes its name from the incredible zebra rock, which is mined locally but which is found nowhere else on Earth. Nobody really knows how or why it was formed but there is general agreement that something special was going on, possibly with volcanoes and Earth’s magnetic field, which caused bubbles of dark, molten, iron rich rock to form in the surrounding sedimentary rock. In the intervening 1.3 billion years, the bubbles have been squashed and squeezed and bent and twisted into the most beautiful shapes and patterns. If you’re lucky enough to find some and you are able to get it out of the ground, then it can be carved and polished to create stunning jewellery and amazing arty things.

As part of the welcome to the campsite, we were pointed to a massive stone table where a bunch of very grubby, somewhat feral kids were industrially polishing away at bits of rock with a selection of wet and dry sandpaper.  Sam, Evan and Floss enthusiastically joined in leaving me to order dinner and savour the moment with another cold one.

If you don’t want to polish your own bits of zebra rock, you can visit the gallery where you can purchase your own ready scrubbed and polished jewellery.  Simples. 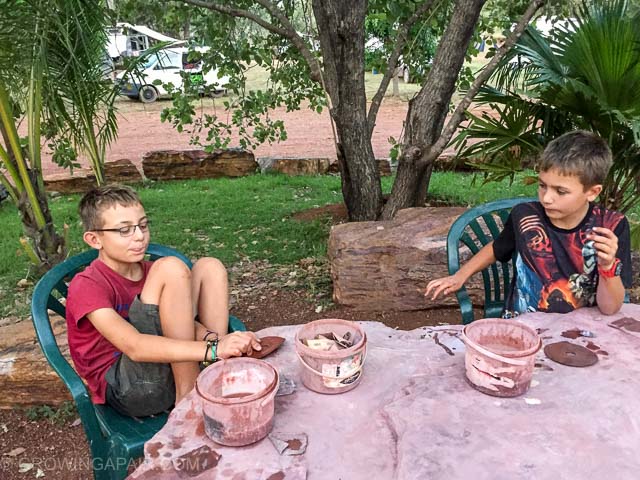 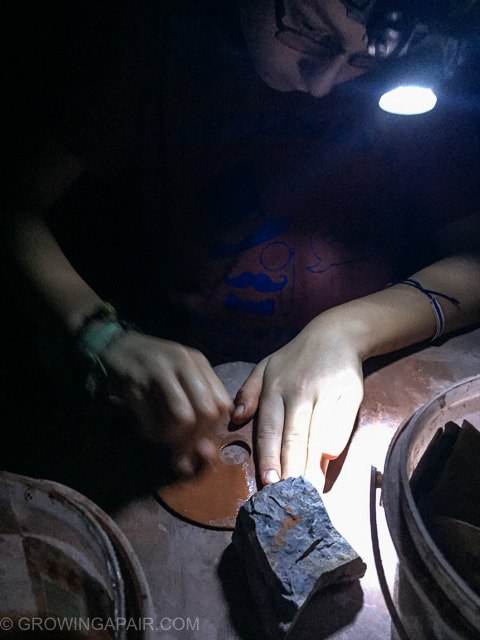 Rock polishing into the night.

The Fish and Chips

The dinner of fish and chips (that’s the full extent of the evening menu) was absolutely perfect and quite probably the best fish and chips I’ve ever eaten. This is massively disappointing as we’d had some friendly banter with some locals in Cairns who claimed Australian fish and chips were better than British fish and chips.  Unfortunately, I would definitely recommend the fish and chips.  And the scones.  And the complimentary tea and coffee.[the_ad id=”4595″]

A communal camp fire was lit, cool tunes off of the 1970’s were piped around the fantastic stone tables in the open restaurant area and the stars came out. The family who own it have created a real sense of community and it’s impossible not to be seduced by the intoxicating atmosphere. If we had bought that Scottish campsite, this is the vibe that we would have been trying to create. It looked like such a simple formula but we haven’t found anywhere else that has come close to creating it. The Red Squirrel Campsite near Glen Coe in the Highlands of Scotland comes close and if you can’t make it all the way to Australia during the school holidays, then you should certainly get up to Scotland to experience it instead.

On the short stroll back to Bruce after dinner, a fellow camper handed over the nine iron he keeps in his caravan and introduced the kids to Cane Toad Golf. It’s even more barbaric than it sounds but the kids absolutely loved it, despite their inability to get a clean swing at any of their victims. I’m not sure that they helped make much of an impact on the resident population, but I suppose that every little helps.  Later on, a family brandishing a heavy stick each wandered past with a big yellow bin bag half full of toads.  Cane toad bashing seems to be a popular family activity. 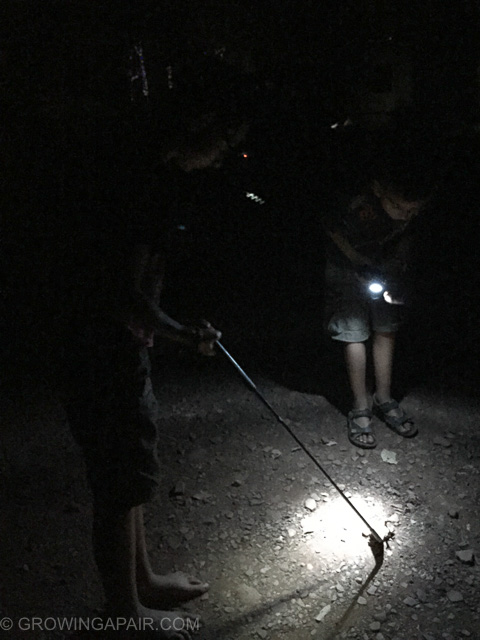 Yes, it is as gruesome as it looks.

We left Zebra Rock campground with happy memories, some well polished stones, and a load of bits of zebra rock collected on the brilliant Mine Tour. The journey back to Darwin had us hatching plans to set up a jewellery manufacturing business when we get home, frantically cutting and polishing during the day and building a massive eBay based money making machine by night. Who knows, there are four of us now and child labour comes cheap…

If you are in the Kunnunura / Lake Argyle area, we would recommend popping into Zebra Rock Mine Campground for a night or maybe two. 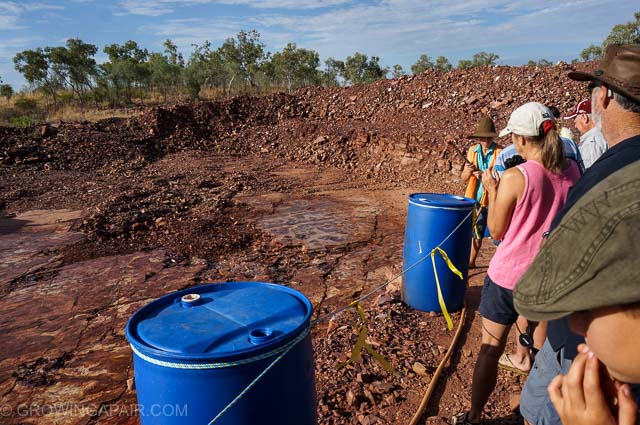 The Zebra Rock Mine Tour – it doesn’t look like much, but this seam of rock is very special.