Good morning from a calm and sunny Pacific Ocean, somewhere between the Marquesas islands and the Tuamotu atolls in French Polynesia.  Its 6am, the rest of the crew are in bed and it occurred to me that I haven’t written on our blog for quite a long time.  Well over a year I think.

So this is a quick update on what we have been doing, what we are up to now (in March 2021) and what our plans are for the future.  That last one is a bit of a mystery though.

Fat Susan has been in the Marquesas Islands for the past few months, since December 2020.  We really, really wanted to stay in the Tuamotus, with it’s crystal clear water and picture-postcard desert islands.  But squalls rush through here during cyclone season and our dodgy windlass just isn’t up to the job of moving the boat quickly.  I just wouldn’t have slept for three months.

Instead, we spent an unpleasant four day passage, beating into the wind and waves to return to Nuku Hiva.  We’d made landfall in Taiohae Bay back in August after crossing the Pacific from Panama and the familiarity was lovely, as was the availability of fruit and veg.  And pizza.  And that’s where we stayed for a while before exploring the southern islands of Hiva Oa, Tahuata and Fatu Hiva. 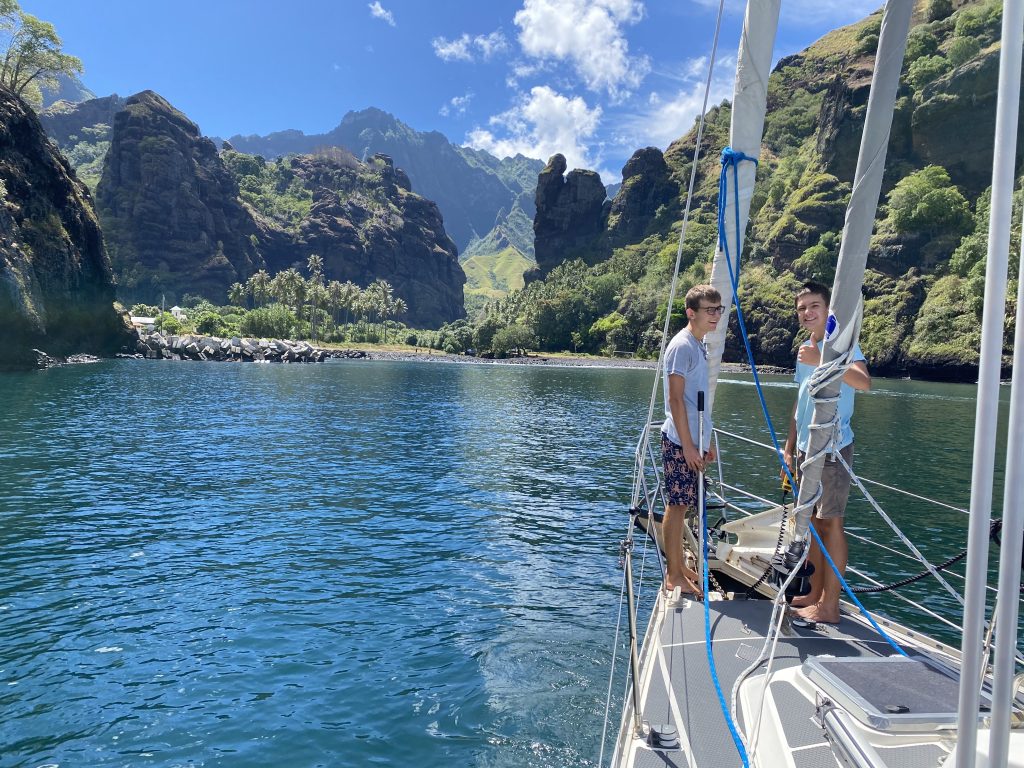 Our home for a few days. Hanavave Bay, Fatu Hiva 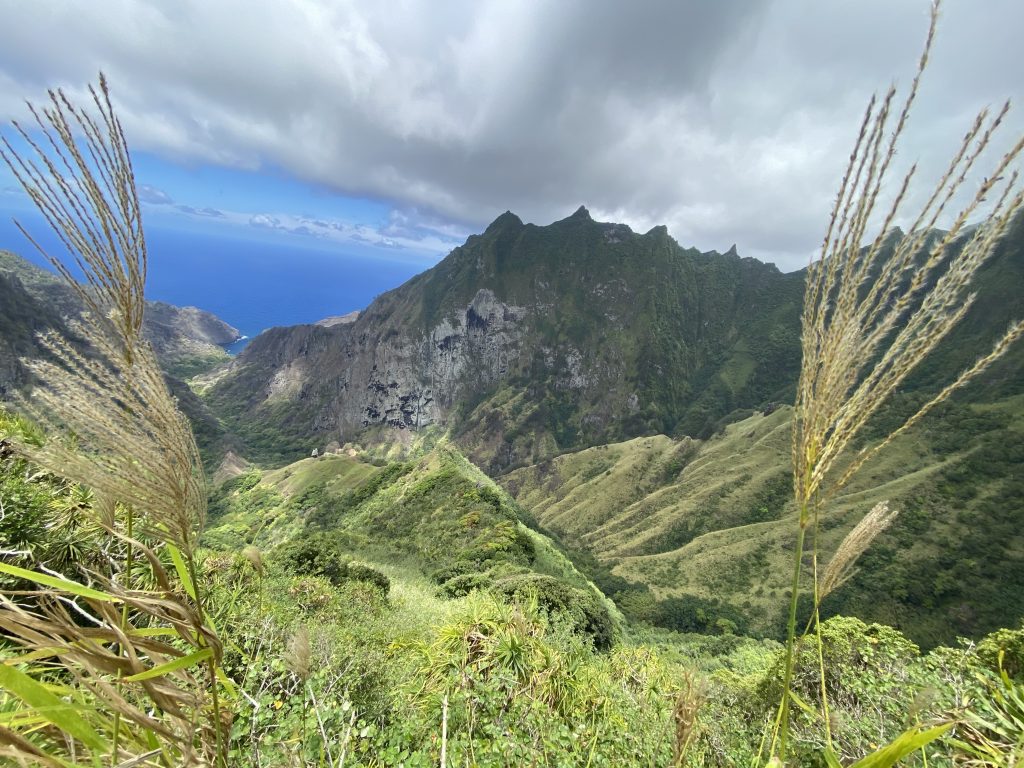 View from the top of a big hill, Fatu Hiva, Marquesas Islands

It was from the stunning Fatu Hiva that we left on this passage.  We’re on our way to Rangiroa, an atoll halfway up the Tuamotus, probably.  I say probably because we’re already on day five of what should be a four night downwind sailing passage and we‘ve still got 230 nautical miles to go.    We’re averaging under 100 miles a day.  The forecast, based on us travelling at at least 5 knots and which promised at least a couple of days of wind, wasn’t strictly accurate and we don’t carry enough diesel to run the engine for 600 straight miles.  We may yet have to divert to a closer atoll and wait for some wind.  Our light wind sails have never seen so much action.  The cruising chute has been in and out of its bag a dozen times, with both spinnaker poles protruding out from either side of the mast and making Fat Susan look a bit like a fishing trawler.  We have been plodding along at a frustrating 3 knots, sometimes 2 knots.  As we get closer to the Tuamotus, clouds and squalls have started to appear on the horizon.  Instead of avoiding squalls as normal,  we’ve been actively seeking them out in an attempt to harness some of the wind that comes with them.  Desperate times. 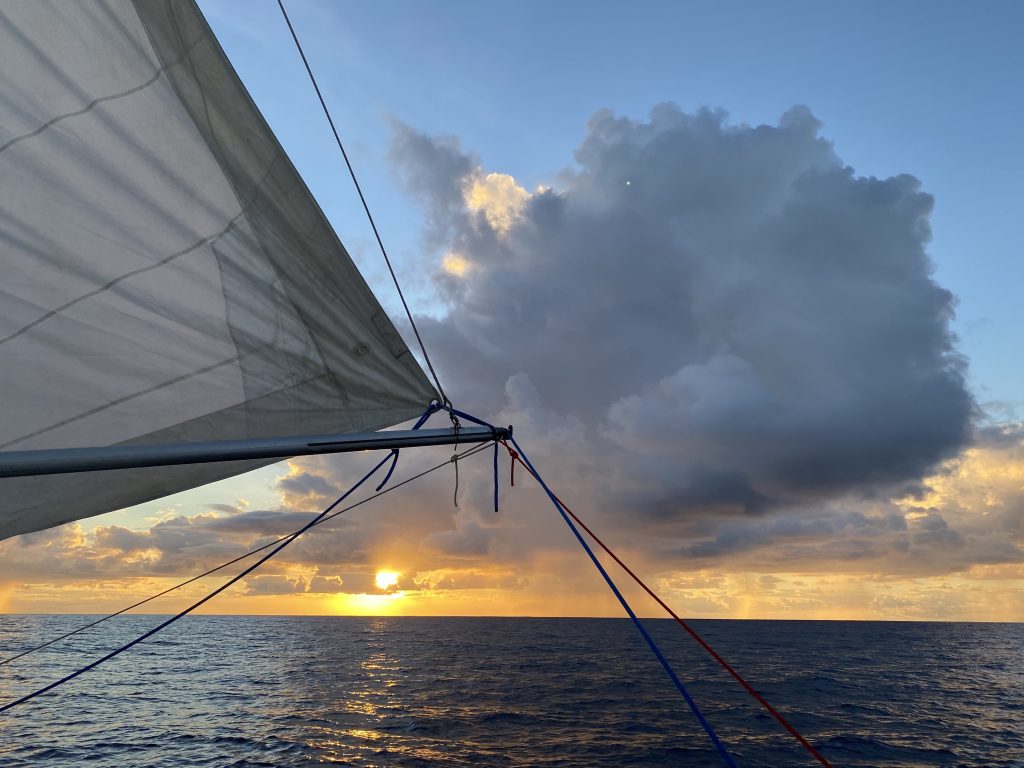 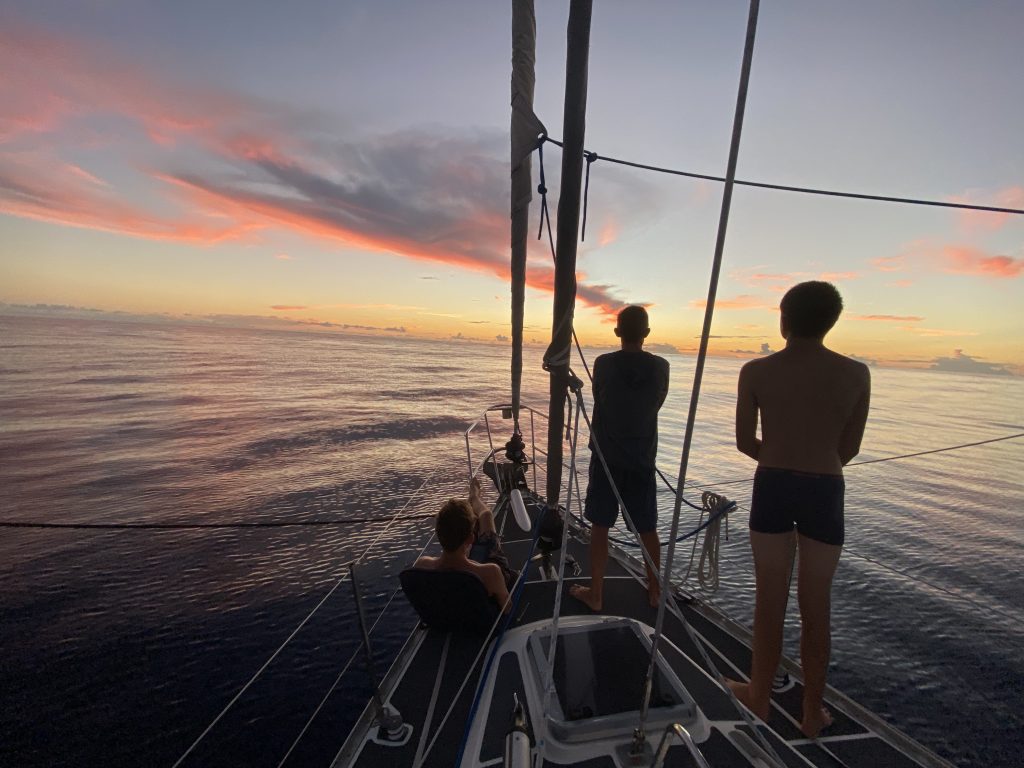 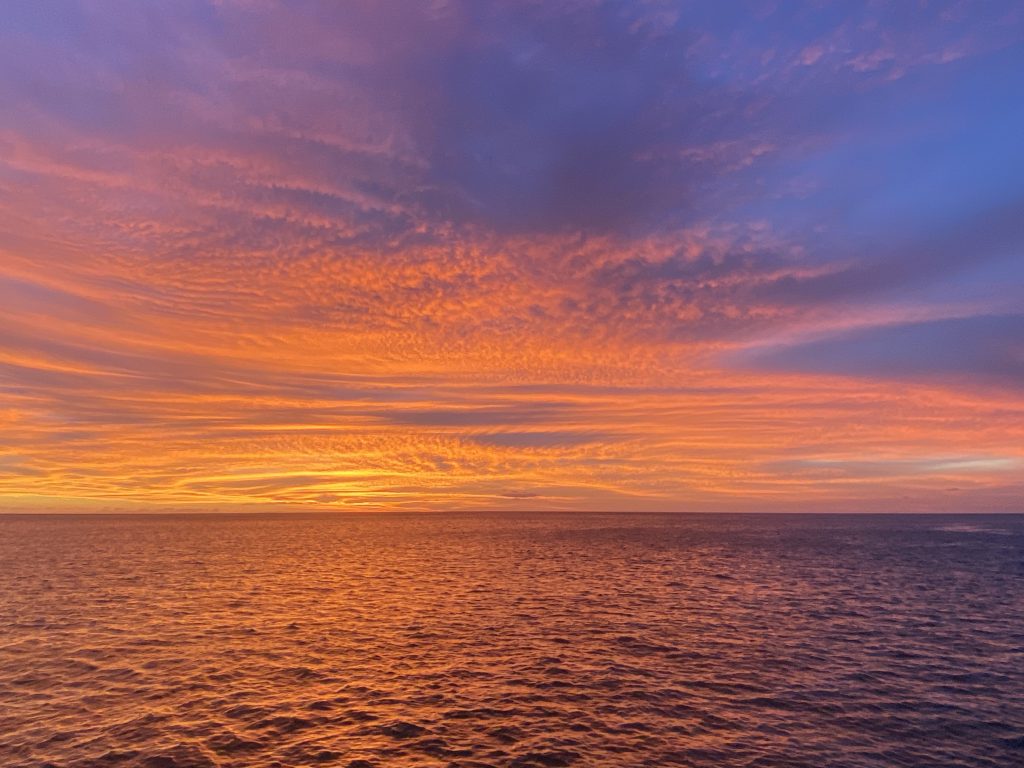 Yesterday, the wind instrument at the top of the mast was spinning aimlessly and the sea was so blue and glassy that we jumped in for a swim.   The 5km of water below us was warm and crystal clear.   We were almost exactly half way to our destination, with 300 miles to go, and the swim lifted our spirits and cooled us down.

The day before we were due to leave Fatu Hiva, we jumped in the dinghy and headed around to the other village on the island, Omoa.  We were anchored on Hanavave Bay, the famous and picturesque Bay of Virgins.  Hanavave village has one small shop but nowhere to eat.  We’d heard rumours of a ‘Snack’ or cafe in Omoa, serving ‘steak frites’ (French Polynesian steak and chips).  It was a three mile journey in Bob in fairly calm waters along the stunning landscape of the island.  I must have jarred my back as Bob bounced over the waves, because halfway up the main village street, my back seized up and I had to be helped into the Snack to sit down.  Steak frites, ibuprofen and Hinano didn’t help.

Our plans to pull up the anchor had to be postponed as I lay flat on my back for a few days.  However, it’s not all bad.  The upside of my agony is that, on this passage, I haven’t been able to carry out my usual tasks with the sails or the night watches.  The boys have stepped up and taken over my normal roles.  They have been fantastic!  Sam has moved his usual night watch of 9pm till midnight to midnight till 3am.  Evan, who has always resisted night watches, has taken over Sam’s night watch, and seems to be actually enjoying it.  He started out doing two hours, but has extended it to three. 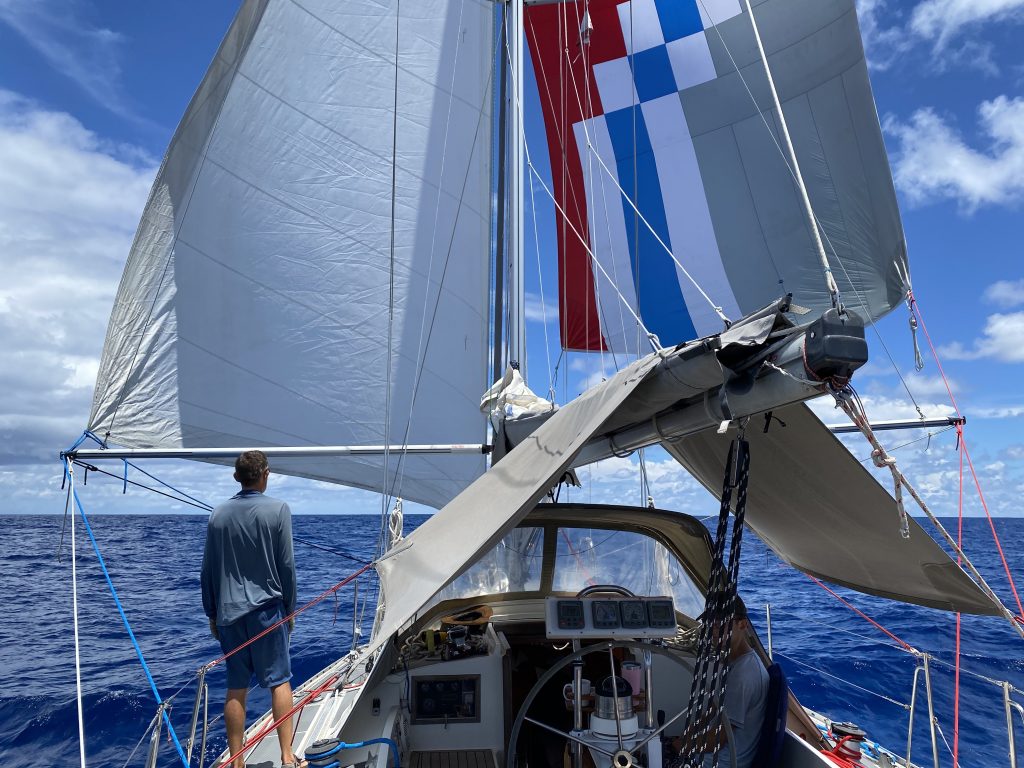 Both boys have been helping with the sails, spinnaker poles and ropes.  Not an easy job with the cruising chute.  Hoisting the spinnaker poles, setting up and flying the chute, getting it wrapped up, taking it down, putting it back up on the other side – that took almost two hours on the first day.  I haven’t had to join in at all and this seems to have boosted Evan’s confidence.

Now that my back is feeling a bit better, I can join in with the night watches again.  But with Evan happy to carry on with his night watch, that gives us four people overnight.  This may be a temporary, calm weather situation but every little helps.  Yay!  Long may it last!

So, on to our future plans.  There has been much agonising, discussion and a few tears on Fat Susan while we try to figure out what to do.  Unfortunately we can’t stay here forever.  It’s not ideal for the teenagers.  They crave a house that doesn’t move.  We are so pleased that we made the decision to sail here from Panama and carry on with our adventure, but we were kind of hoping that this COVID nightmare would be on the way out by now and borders would be opening.  There’s no sign of that in the foreseeable future so we need to make some decisions.

French Polynesian borders are currently closed.  Almost all other borders to the west are closed.  We’re not sailing east.  The options open to us are to sail to Hawaii (a long way north and we have no visas, and then where?) or Fiji (the only other country accepting boats to the west of here, but there’s nowhere to go after that and we definitely don’t want to be there in the next cyclone season).  So, we have applied for an exemption to enter New Zealand by boat in order to carry out a refit\repair.  It’s expensive and we’ve had to sell my flat in the UK to do it.  It’s also another long journey to get to NZ from French Polynesia, around three weeks at sea.  In normal years, there are lots of places to stop on the way, breaking the passage up into no more than week-long sections and allowing for a safe haven should nasty weather appear.  The sail to NZ can be dodgy at the best of times, and this time of year is not the best of times.

A lot of paperwork has been submitted to the NZ Immigration lovelies.  There are three stages to the application.  We have passed the first one and are now impatiently waiting for the second one.  Then we will be able to apply for a temporary visitor visa and the right to enter New Zealand.  That’s another frustrating aspect of being at sea for longer than expected – there may be an email waiting for us right now.

Nothing is definite yet.  We still have other options.  We have also applied for a long term visa for French Polynesia.  We could stay here for another season.  We could sell the boat and fly back to the UK.  Even if we get the NZ visas, we may still change our mind.

In the short term, however, we’re looking forward to reaching Rangiroa, hopefully before old age sets in.  We’ll explore some more paradise atolls, do some diving, and then head to Tahiti and the Society Islands.

Fat Susan is currently gently motoring at 4.1 knots in zero wind through a flat calm and unrelentingly blue Pacific Ocean.

We have arrived in Rangiroa, the largest atoll in the Tuamotus.  Yesterday, we heard that we’d passed Stage Two of the NZ application  Yay!  Also, we sent my passport back to the UK for renewal almost four months ago.  It got stuck in Paris for six weeks on the way there, and then went missing somewhere in Califirnia/Auckland/Tahiti on the way back.  Much stress has been caused by this.  We have spent a lot of time on the phone to the Passport Office and DHL in several countries.  But today, DHL have finally found it and are sending it to us.  Phew.