More Thoughts From A Train – Seven Months of Highs and Lows

I’ve now got just over seven months of early morning train action under my belt, commuting from Portsmouth on the 06:34 to London, it’s high time for a bit of reflective writing.  I’m looking back on the highs and lows of the commute, boat ownership and our first summer of sailing.  Things have definitely moved on since my first ‘Thoughts on a Train’ post…

Commuting For A Living

The easy stuff first. The commute actually isn’t turning out to be awful, mostly because I don’t do it very much. I’ve been incredibly lucky and it’s been very rare to have a week where I’ve been up to London more than twice a week. And in fact, there was a period over summer when I hardly came up at all. When I do travel, the shockingly awful “Free WiFi” means that there’s no chance of doing any work so I don’t have to feel guilty about staring out of the window, reading a book or writing stuff like this.

It was pretty grim when the clocks went back a couple of weeks ago, but the early summer mornings were glorious. The journey home sucks, but audio books and podcasts have kept me sane. And every Monday, I get a text message from the bank giving me a little boost as I see our savings slowly, ever so slowly, ticking up.  That, after all, is the reason I get up at 05:20 twice a week.

I have to admit, that this hasn’t been the unconditionally positive experience I’d been expecting. Travelling to Ipswich every weekend had its up-sides, such as spending all that time together in the car enjoying memories of past travels whilst also looking forward to the adventures ahead. But it was a real slog and it cost a fortune in petrol.

I guess that’s pretty much how things have been since we took ownership of the boat. There have been absolutely fantastic times.  There’s nothing better than ending the day together on the boat after a day’s sailing, watching the sunset and planning tomorrow’s expedition. 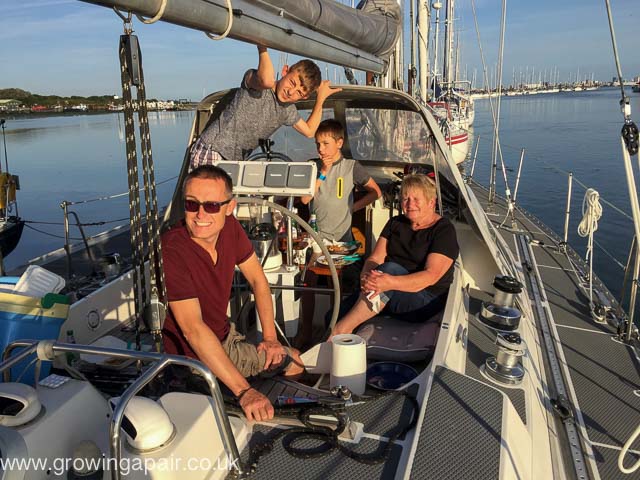 Summer evenings on the boat – not all bad then…

But outside of that I’ve personally found most things to be difficult and horrendously expensive. There have been many times when I’ve questioned the choices we’ve made, the decisions that have brought us to where we are, and wondered how the hell we’re going to get ourselves out of the mess we’ve pushed so hard to create for ourselves.

Our Summer of Sailing

The adventure of bringing the boat home was brilliant, and I’ll always have very happy memories of the week we spent in Ipswich getting ready for the passage home. The sailing adventures are probably best described as having been a testing experience with an unreasonably steep learning curve. It’s hard to see when you’re deep in the moment, wracked with self doubt and nearly overwhelmed with fear, but looking back we’ve come a hell of a long way.

I think we’ve managed to give the impression of being fairly competent to the friends that we’ve taken sailing.  Of course, they might not think so!  We have neither damaged anyone nor sunk though. I once heard a pilot describe a successful landing as being one that you walk away from. By that measure, I think we can be proud of our achievements over the last two months.

What I’m not so proud of is my failure to ensure that the kids are happy and enjoying the experience when we are out on the water.  I’ve been unable to keep a lid on my stresses and anxieties.  Evan has been affected by my inexperienced, unreasonable and shouty approach to skippering.  He is now a bit reluctant to join in with the winching and helming.  Canary Tony didn’t shout, and he had wind acceleration zones. Beardy Will didn’t shout and he had us racing in a force 8. Interesting Paul didn’t shout, not even when we were sinking. I need to be less “Captain Shouty” and more Canary Tony, but with even more dolphins. 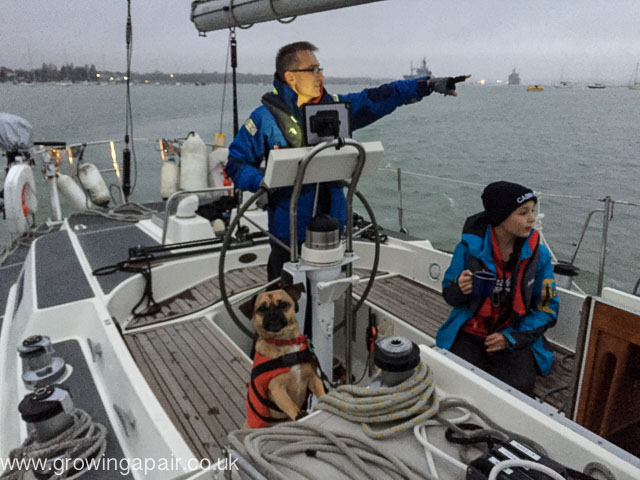 I think we’re going to find the long winter months particularly difficult. We’ve got a shopping list of jobs that we need to get done and literally no idea how to do any of them, or enough money to fund them. The weekends are short and it’s currently dark by 4.30pm.  If we’re going to be ready to be back in the water in March we’re going to have to grow a pair and get busy turning ourselves into bonafide cruiser material. Our YouTube viewing has changed from watching S/V Delos and Sailing Zatara enjoying themselves in the sunshine, to “Random Chris” and his instructional stuff on anti-fouling and solar panels. Who knew that wiring diagrams could be so exciting?

Don’t mind the 06:34 to Waterloo.  Love sailing.  Might be aiming too high with the dolphins.