How We Saved Money to Travel the World

We had already been saving money to take our sons (aged 9 and 11) on overseas family backpacking adventures.   But when we decided to drop everything and travel around Asia for a year, we had to turn our money saving efforts up a gear or three.  We ended up travelling around Asia and Australia for a year.  Below you’ll find the money saving ideas that worked for us.

They won’t all be relevant for everyone.  We are a family of four with two jobs, a house, a car and two children who go to school.   We have four people to feed and clothe, and afterschool activities to pay for.  We don’t go clubbing and don’t eat out as much as we used to, but we like a glass of wine and a movie in the evenings.  Everyone is different but, ultimately, it’s all about priorities.  If you’re passionate about travelling and determined to save money, then you’ll find a way.

1. Work out how much money you need to save and your target date

We based our numbers on a daily budget of £50 a day for essentials (food, accommodation, transport), with extra for flights and adventures.  There are four of us and this is a very conservative daily budget.

We wanted to be in Nepal for the October trekking season, which gave us a date to aim at. You might want to catch a particular festival in India, avoid the monsoon in Laos or fit your travels around the school year.

If you absolutely can’t save that much money by your target date, don’t give up. Change your target date.  Or plan to travel for a shorter length of time.  It’s better to go for six months instead of twelve, or go a year later, than not go at all.

2. Figure out how you spend your money

We went travelling pre-kids in 2003 and used a money management tool called Quicken before we went. We recorded every penny we spent for six months. It categorises everything you spend and draws lovely graphs to tell you the bad news. It was a bit of an eye opener. We discovered so much unnecessary spending.  We were spending £125 a month at our favourite Indian restaurant!  So that’s why they sent us a Christmas card that year!  It all suddenly made sense.

This was back in the dark ages, the time before smart phones and digital photography. We had to save all our receipts and input everything into our computer manually at the end of each day. Nowadays, there are loads of apps for your phone that do the same thing. We use the Toshl Finance app while we are travelling. We’ve also used the Travel Wallet app in the past while we’ve been away. Both of these apps would be good for tracking where you spend money at home as well as monitoring your spending while you are travelling.

Of course,  you could start by just going through your bank statements, direct debits and standing orders and figuring out where your money is going each month.  I bet you can find something you had forgotten you were still paying for.

3. Save money by reducing your outgoings

When you know where it’s all going you can decide where you can cut costs.

We did all of these things. Well, maybe not the last one. We tried, we really did.

To put it in perspective, if you save £5 a day by taking your own lunch into work instead of heading to the canteen, that’s £25 a week or £100 a month or £1200 a year that you could be putting into a separate Travelling Account to spend on exotic adventures.

Check out the fun but terrifying ‘Demotivator’ calculator at www.moneysavingexpert.com. 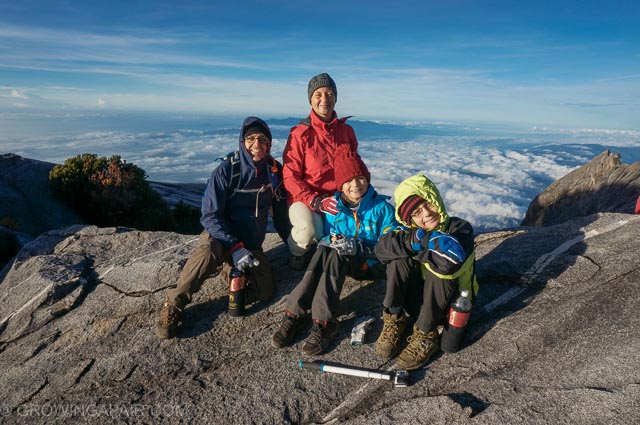 On top of Mount Kinabalu with my family. My motivation!

Another way to save money is to be a squirrel. Set up standing orders to move small amounts of money from your bank account as soon as you get paid.  Choose an amount you think you won’t notice. Or how about squirrelling away one day’s wage? Calculate how much you earn each day and squirrelling that amount away each month. Put it in an account that isn’t easily accessible, or one that you have to give notice to take the money out, like an ISA or Post Office Account.

I’ve found that smaller amounts disappearing into a few different savings accounts works best for me. Have some vanishing into a savings account, more disappearing into a Post Office Account and another load going into an ISA somewhere. Then when you check your bank statement you don’t have large amounts of dosh going to anyone place and it all seems fine. Well, it makes me feel better anyway!  Set the stand orders up for the day after payday and before the mortgage or rent goes out.

Start now. Even if you are not thinking of travelling, start anyway. You won’t even notice you’re doing it! Our travelling savings were significantly boosted by my squirrelling habit.

Another squirrelling money saving option – collect £2 coins. Get one of those big tin can money boxes. You know, the ones that you have to open with a can opener. Check your pockets every night. Any two pound coins go straight in the pot. Don’t open it until you can’t lift it. Or until you go travelling, whichever comes sooner.

Then, just before you get on that plane to somewhere exotic, bung all your hard-squirrelled money into your Travelling Account!  You’ll be loaded, probably….. 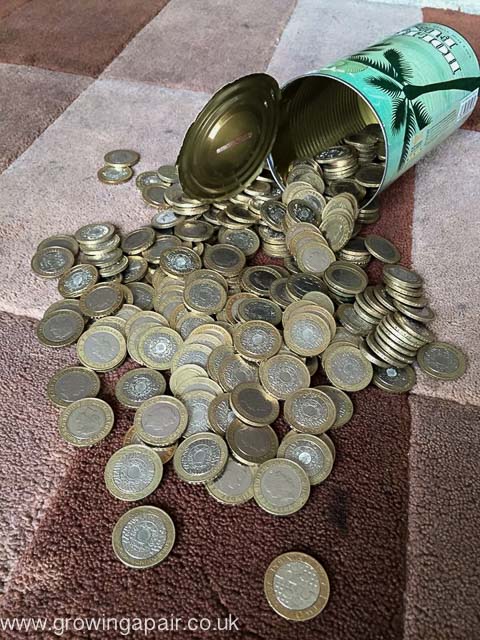 There’s £400 towards our travels here. Every little helps!

5. Declutter and sell all that stuff you don’t need

When we realised we would probably have to rent out our house to be able to go travelling, we started a Declutter Challenge. The idea is simple: you find items around your house that your don’t need or don’t use. You identify one thing on Day One, two things on Day Two, three on Day Three…. By the end of the month, you will have identified an astounding 465 items of clutter. Throw them away, take them to a charity shop or, even better, sell them.

It makes you realise how much stuff you don’t need. We got rid of old bikes, laptop bags, kids toys, camping equipment, tonnes of clothes and loads of worn out socks. We sold stuff on eBay and at car boot sales.

We earned almost £1000 from getting rid of stuff we didn’t use and decluttered our house in the process. Result.

If it’s an option, change your job, ask for a pay rise, renegotiate your contract or volunteer for overtime.

This may not be an option, but why not ask anyway?

Shop around and renegotiate your mortgage rates. We saved money, in fact a few hundred £££ a month, by moving to a mortgage provider with a lower rate.

If you rent, could you move somewhere smaller or cheaper?  Or move back in with your parents?  I know.  Desperate times.

8. And just before you leave……

Sort out the big things. Rent out your house. Sell your car.

These were two big money items for us. Getting rid of our car bagged us several thousand £££ of travelling money.

We rented out our house for just seven months but that paid our mortgage for the whole year. Ok, so this didn’t give us much of a travelling income but our house cost us nothing while we were away having fun. On top of that peace of mind, we had an attic to store our stuff in and still had somewhere to live when we came home. Bargain. 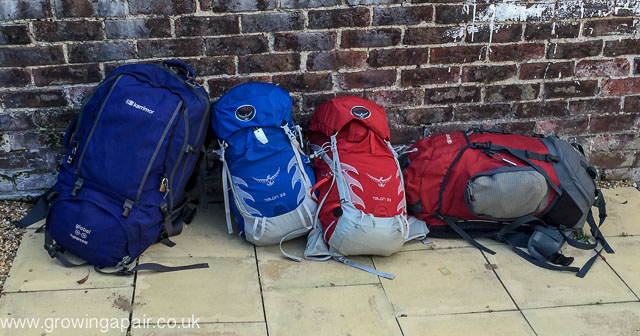 It’s all about priorities

Ok, so not everybody can do all these things. Not everybody has two incomes. Lots of people have less well paid jobs. Not everybody has a house to rent out or a car to sell. If you’re unemployed with £50k of credit card debt, then your priorities should maybe lie elsewhere….but I guess you’re probably not reading this blog!

Most people could save money. It might take a year or it might take six years. But it’s possible if you have the determination and self-discipline and you really, really want to do it.

Got any other good money saving ideas?  Pop them in the comments below.  Your ideas might help someone else out. 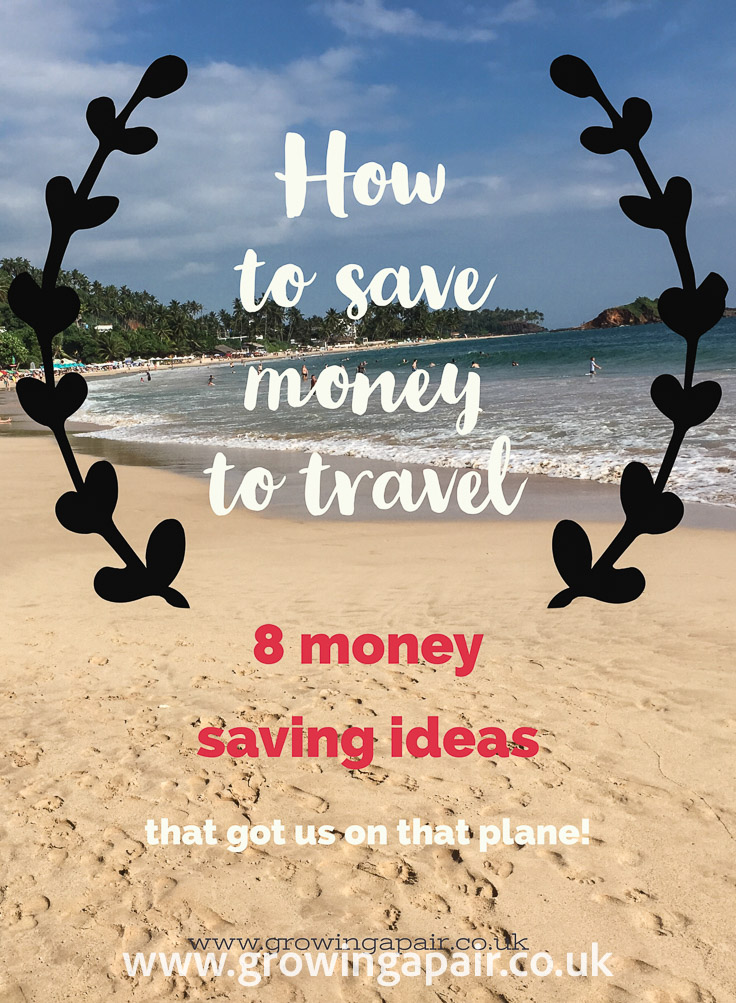 ← The Hardest Part of Family Travel
VIDEO :: Songkran Fun on the Streets of Bangkok, Thailand →