Sailing Across the Bay of Biscay – Falmouth to A Coruna

After a week of sailing along the English south coast in pretty rubbish weather with the wind constantly in the wrong direction, we picked up Uncle Adam in Falmouth, filled the cupboards with baked beans and Angel Delight and we were off!  We slipped the lines at 6am as the sun rose over the Cornish coastline.  We were excited, apprehensive, relieved, happy, and just a little bit terrified of what lay ahead of us in the Bay of Biscay.

Sailing across the English Channel and the Bay of Biscay was possibly the most exhilarating adventure of my life so far.  This was by far the longest passage we had ever done in a sailing boat and the farthest away from land we had ever been since we started sailing –  by several hundred miles.  Atlantic swells and high winds made for an uncomfortable but exciting passage for the first few days.  The sailing was hard work at times, with waves flooding the decks and soaking the helmsman.  Sleeping was a challenge and bruises were many.  Standing up below decks without holding on with both hands was impossible.  The kids couldn’t sleep in their bouncy forward cabin so curled up on the sofa, or under the sofa, or spreadeagled across the saloon floor.   This was our first rough night passage, and we all found different ways of sleeping while being constantly rolled from one side of the bunk to the other. 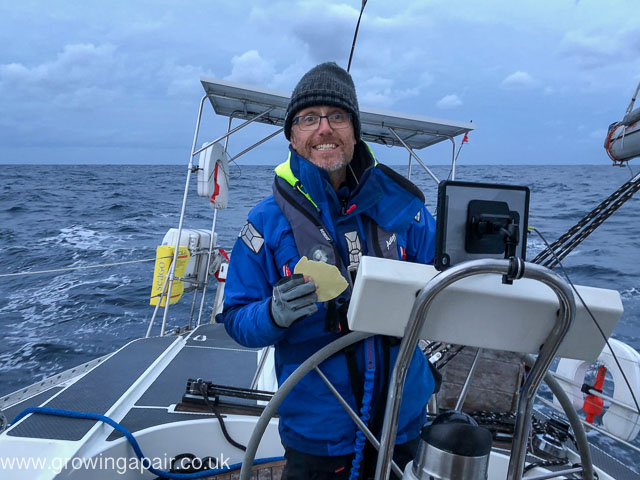 Dez, slightly delusional through lack of sleep, snacks on a poppadom. 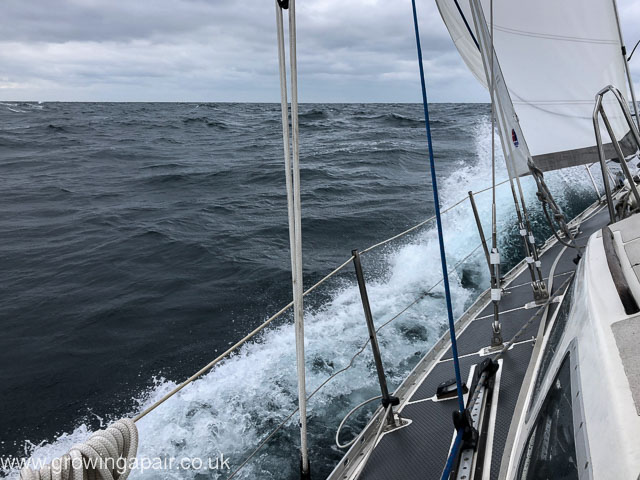 Fat Susan cutting through the waves in the Bay of Biscay

We hadn’t quite got round to pre-preparing meals for the passage so we lived on crisps and chocolate biscuits for the first couple of days.  Cooking was just too difficult.  Top class parenting, that!  It’s a good job that our kids are hardcore.  During the day, we chatted, ate crisps, tried to sleep, and enjoyed the amazing spectacle of the Atlantic Ocean.  What an adventure! 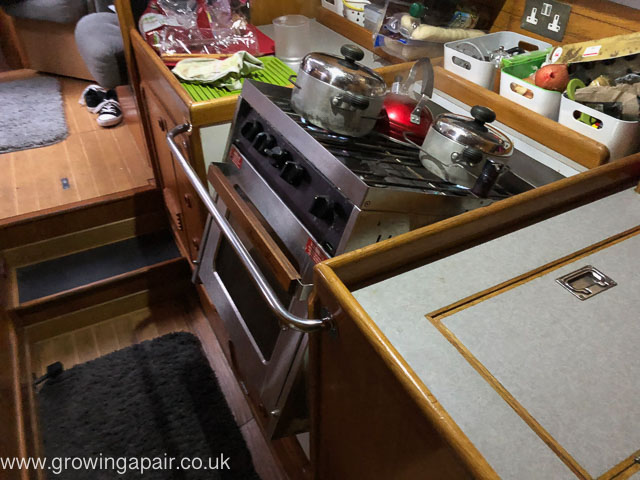 Very pleased with our gimballed stove in the rolling seas. Making a cup of tea on the worktop was impossible, but the gimballed stove stopped the tea from spilling.  Knowing that the stove in horizontal messes with your head though! 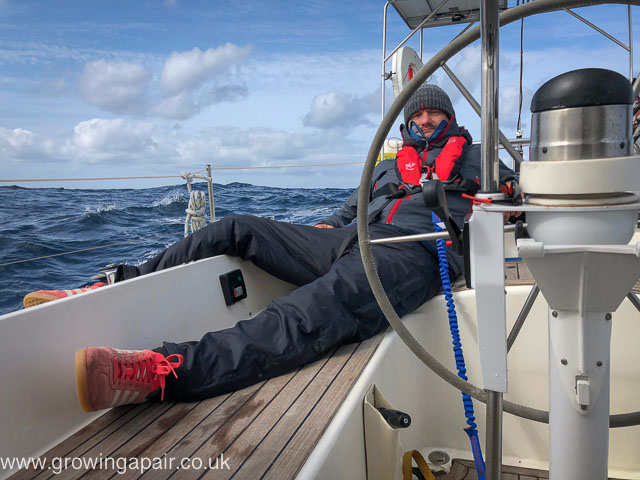 Uncle Adam looking cool, whilst holding on to the side of the boat with his legs to stop himself sliding to the other side of the cockpit.

Night watches were quite scary.  There was little light from the moon and many tankers and fishing boats to dodge.  Random, extra big waves took us by surprise, breaking over the bow of the boat in the dark.  The wind gusted to 35 knots on the first night with the 3m swell pushing Fat Susan from side to side and the wind changing direction without warning.  The autopilot wasn’t coping well so we steered by hand all night, two people in the cockpit at all times to help with the sails.  With only three adults onboard, this made for an exhausting night for all.

By the second night we had more confidence in ourselves and Fat Susan, and so got a bit more sleep, but the winds and swell didn’t give up.  There was an amusing moment when Dez, his mind possibly slightly addled by lack of sleep, had a bit of a panic as the echosounder started reading 30m, then 15m, then 6m, then 2m.  Oh my god, we’re running aground!  100 miles from land in the middle of the Bay of Biscay?  Probably not.  Looking at the charts, we were in 4000m of water.  The echosounder can’t see that far so was getting confused.

After a few days the wind dropped and things became a bit more comfortable.  The sun came out and before we knew it we were motoring the last twelve hours in flat seas with blazing sunshine, spectacular sunsets, dolphins and even a whale.  In fact the sea was even flat enough to put a hammock up, eat fajitas and watch our first spectacular sunset with no sight of land. 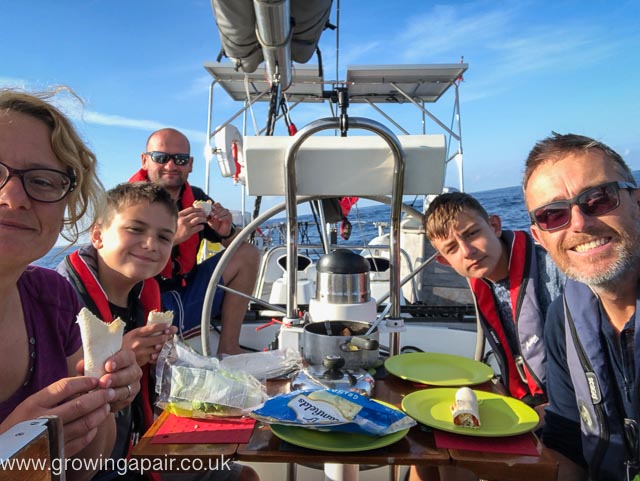 Chicken fajitas were very welcome after several days of crisps and biscuits. 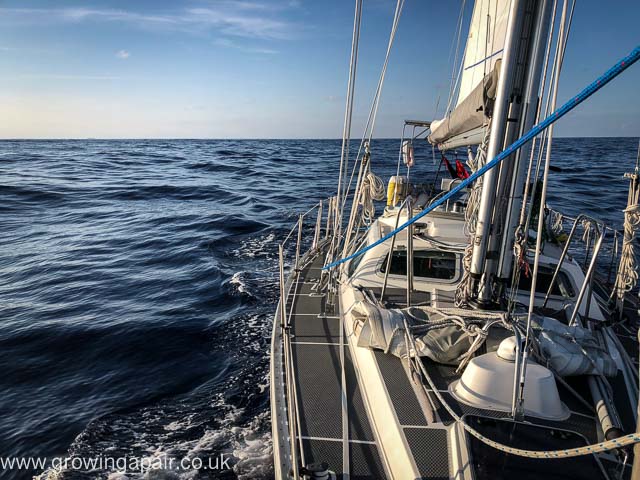 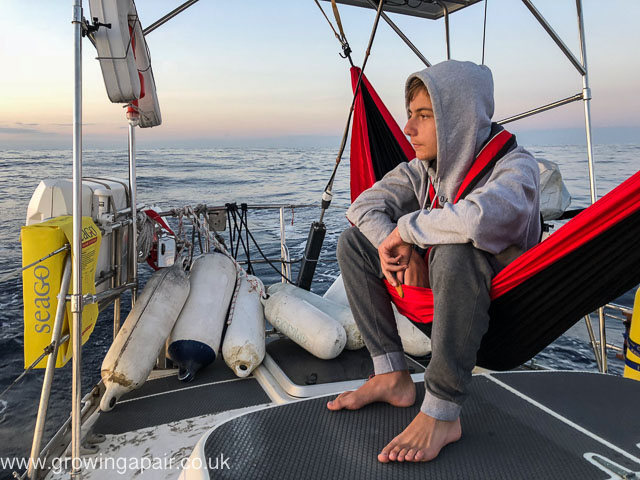 Sam waits for the sunset. 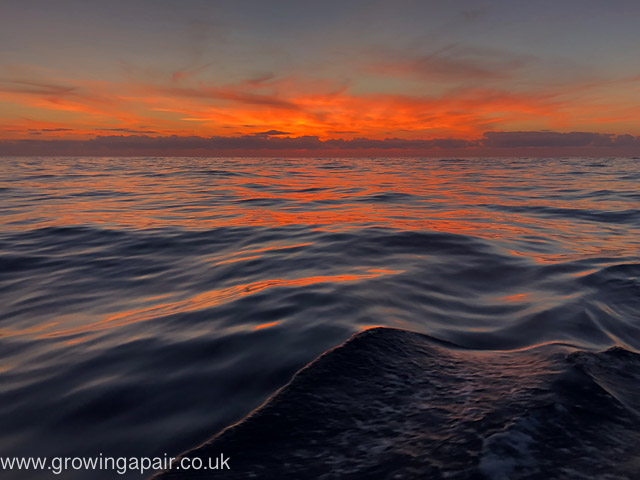 No filter here! Sunset in the Bay of Biscay – gobsmackingly spectacular. 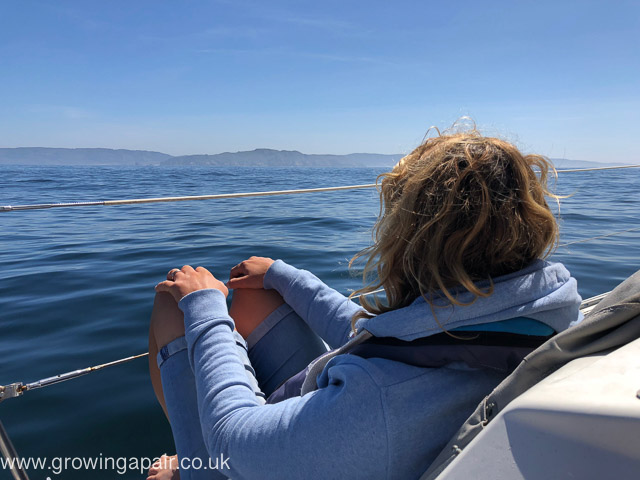 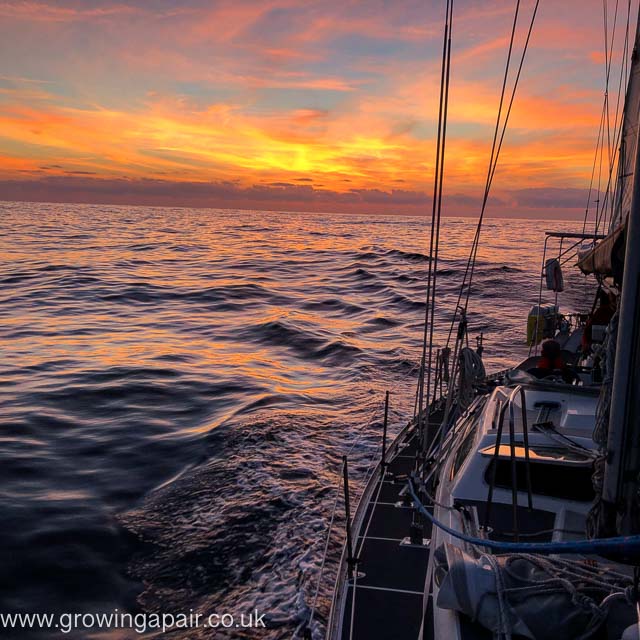 As we sailed into A Coruna in Northern Spain, we could see our friends Andy and Eleanor waving to us from the end of the breakwater.  The relief was overwhelming.  We’d done it!!  Sailing from Falmouth to A Coruna across the English Channel and the Bay of Biscay will always stick in my mind as one of our biggest achievements ever.  In years to come, we will sail longer passages in higher winds with bigger seas, but our Bay of Biscay crossing will always be our first.  So proud of our kids, so proud of us, so proud of Uncle Adam and so, so proud of Fat Susan!

← Starting our Sailing the World Adventure!
Sailing South – the Atlantic Coast of Spain and Portugal →