That morning the friends were woken by the stone they were sleeping under shaking. Sam stuck his head out and saw a gigantic foot slamming forcefully into the rock ahead. Then an idea struck like a fork of lightning. He jumped onto the foot and shot up it. Evan stuck his head out of the rock as well.

“Spam, what are you doing?” he squeaked

“Something I just invented, I call it tourist hopping!” Spam exclaimed and promptly leapt off the tourist’s head, arms wide.

At that moment, a thing happened that no one ever could have guessed.  Small amounts of skin rolled out along his arms and legs, it caught the air under him and held him at the tourists’ eye level. He was flying!

He weaved in and out of the tourists, yelling in delight.

As soon as Evan saw Spam doing this, he tried it as well.  But he jumped, and “Bam!”.  He fell onto his skinny little chest, wheezing and rolling over.  At that moment, a snake slid across onto the path, and Evan jumped onto it and put his head at the front so that the snake could see him.  Just as he hoped, the snake chased Evan just like a carrot on a stick.

Sam was tourist hopping to the front of the queue, when Evan caught up with him.

“This is awesome!” Spam yelled down to Evan.  “I could do this all day.”

“Really?  Because I’m finding this snake dreadfully uncomfortable”, he squeaked back in reply.

Spam just did a smug loop-the-loop.

Suddenly, the snake stopped, and Evan was flung off its head, landing in the tangled shoelace of another tourist.

“That’s not a snake!  It’s the Leek of Evil, back from Annapurna to help the Salad of Kinabalu Peak.  Kill it!”  Spam yelled, and shot towards it like a bullet.  The snake, however, saw Spam flying towards it and vanished down a hole under a rock.  As it was a relatively large hole, Spam shot after it with Evan scampering along in their wake.

After a few minutes of underground passages, Spam was thoroughly lost.  Evan on the other hand, had disappeared.  Spam could see the snake’s tail whipping around the corners at high speed.  Just at that moment, the snake shot through a hole in the floor and Spam had to turn around and head down into a huge cavern under the mountain.

“It’s all hollow!”  he exclaimed, seeing that the cavern was about as big as the mountain.  Pouring from five different holes, there were green and orange liquids pouring into a gigantic bowl and forming back into the Carrot of Doom, the Peas of Despair, the Lettuce of Rage and the Broccoli of Ruin.  He also saw the Leek of Evil slithering towards the stone salad bowl at the bottom of the cavern.

At that moment, from the bottom of the floor, came a flash of a sharp pink something, and the Leek of Evil had been chopped into two.

“Nice shot, Evan!”  Spam yelled before shooting towards Evan as the Peas of Despair attempted to drown Evan in exploding peas.  Evan had quite a few burn marks already.  Spam picked him up by the middle and flew in a tornado around the Peas of Despair, shredding all of the podapults with Evan’s razor sharp tail.  Before they could all be defeated, the peas shaped themselves into two long, thin wings.  All around he saw the lettuce forming into a body, and it connected with the wings.  The carrot formed into two long legs, and the leek giving it a snake’s head.   The broccoli formed itself into a long clubbed tail.  It was the most horrendous creature they had ever seen, mostly because it was made of vegetables.  A snake’s head, with a bat’s body, and a tail with a heavy broccoli club on the end, it landed on the ground, and crouched down like a bat, roaring at them.  It the most horrendous noise they had ever heard, screeching like chalk on a blackboard, but squeaking at the same time.

“Oh no!” Spam said, “It’s a Saladasaurus Rex, the most fearsome creature known to squirrel-kind!”

It roared again, and then charged, the snake head dripping molten vegetables from its razor sharp fangs.

“Evasive manoeuvres!”  Spam yelled, lobbing Evan under the Saladasaurus’s legs, whilst flying over its wings, then ramming into Evan, preventing him from being smashed into pieces by the broccoli club tail.

“The tail’s going to get in the way the most if we’re going to attack the sensitive parts” said Spam.

“I agree” said Evan. “we’ll try and take that out first”.

So they shot all the way up to the roof of the cavern, and Evan climbed onto Spam’s back, holding his tail straight, like a jousting stick over his head.  Spam tucked in his wings, and dived.  He was going crazily fast.  After a couple of seconds, he heard a huge BANG! and a huge white cone spiralled out behind him.

“Speed of sound!” he yelled, before Evan swung his tail up effectively removing saladasurus’s tail, the one thing that stood between the friends and victory.  They shot up again, but the snake head understood their tactics now, and it chased them this time.  But again, like lightening, and idea struck Spam.  He threw Evan off his back yelling “Distract him!”  before starting to spin in a circle around the cavern.  Wind that wasn’t there before, picked up, spiralling into a hurricane, holding the saladasaurus on its back.  Evan shot up, grabbed hold of Spams back and yelled “Now!”

Spam sped straight down, towards the Saladasaurus.  He tucked himself into a cannonball shape and Evan started spinning with his razor tail out straight, turning the pair into a pink ball of death, and they rammed straight into the Saladasaurus’s body, killing it instantly.  As it began to dissolve away, they had learned from the last tricks, and caught the essence of it in a large bottle that Spam tucked away under his fur before it could reform.

“Well.”, Spam said, “That was harder than I could have ever have guessed it could be”, before getting Evan on his back, and climbing all the way to the top of Mount Kinabalu.  Once they reached the top of the mountain, Spam leaped off, and started gliding down to Kota Kinabalu.

Evan swivelled around on Spam’s back and saw a bright, orange ball rising slowly above the mountain.

“Aha, that would explain it.”  said Spam, before ramming straight into a tree.  “We’re here!” he said, before getting up and looking straight up at a grey and ginger cat with a very hairy moustache and an absurdly long grey beard.

“Lord Desmond of Cheam!” Spam said.  “We have completed the mission.  The Salad of Kinabalu Peak is dead.  And I found out that I can fly!”

“Well done, you two” purred Lord Dezzy.  “I’ll now take you for a coffee as your reward.” he continued before climbing down a tree and strolling off into the sunrise.

“Can we have ice-cream as well?” Spam yelled after him.

“No!  Not icecream yet.  If you want to eat ice-cream, you must convince all of the humans in the world to stop eating vegetables.”

“Ohhh…..” Spam and Evan chorussed together. 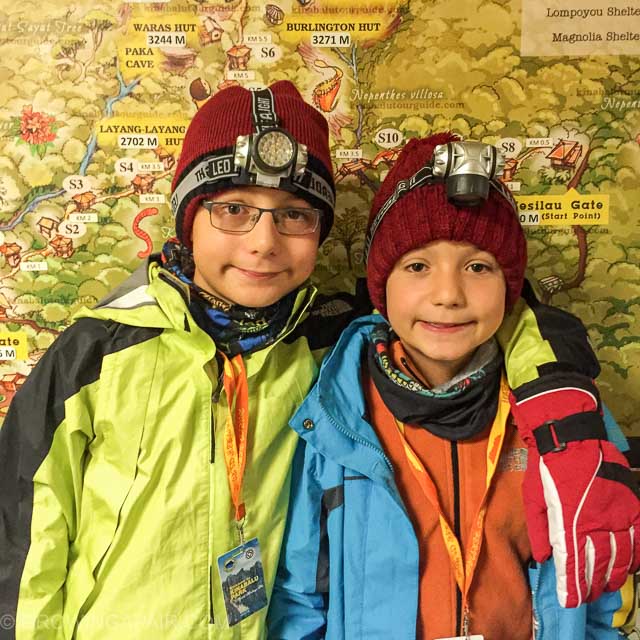 ← Kinabalu Vegetable Killers – Chapter 4, The Broccoli of Ruin
Avoiding Culture and Searching Out Dinosaurs In Singapore. →

One Comment on “Kinabalu Vegetable Killers – Chapter 5, The Saladasaurus of Kinabalu Peak”