The Dark Cave in Phong Nha, Vietnam is ‘Suitable for all ages’.  At least that’s how the blurb about the Phong Nha National Park Tour described it.  Perfect for Sam (11), Evan (9), Megan (8) and Fraser (5).  And indeed, the first half of the day proved to be entirely fine being educational and breathtaking in equal measure. However, after a very tasty “build yourself some spring rolls” lunch adventure, we stripped down to our swimmers, were handed a hard-hat, a head torch and a life jacket, and things got a whole lot less suitable.

We were staying at the iconic Phong Nha Farmstay and were eager to book ourselves onto one of their famous tours.  We plumped for the National Park Tour as it seemed sedate enough for small kids.  The morning started with a visit to the Highway 20 War Martyrs Memorial Temple and the 8 Lady Tomb, followed by the awesome and gobsmacking Paradise Cave.  Then we headed to the Dark Cave.[the_ad id=”4595″]

Whilst we were having lunch, the zipwire over the restaurant where we were sharing our hand-crafted spring rolls with the usual assortment of apparently stray dogs, was constantly busy with 20 year olds flying through the air wielding GoPros, dodgy beards and tattoos.  We weren’t quite sure what was going on, as the morning had been spent in a very sedate fashion exploring temples and the mind blowing Paradise Cave.  Nothing in the advertising blurb had mentioned ziplines or the need for safety gear.  Still, full of excitement, and feeling a bit silly being dressed like a cross between the Village People and barefooted Bob the Builder, we wobbled off on our kayaks towards the ominously named “Dark Cave”. 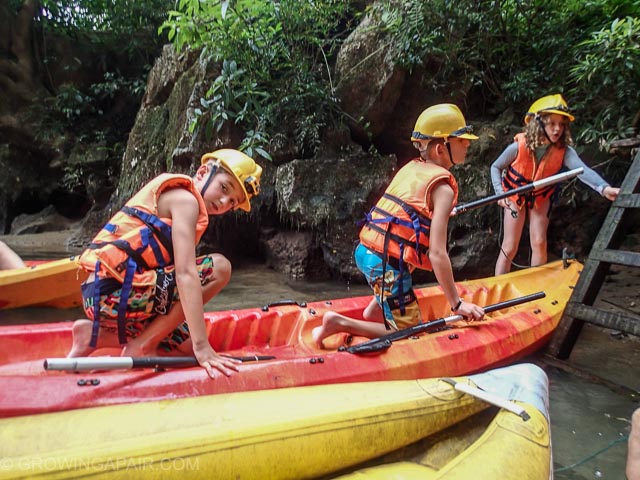 A short paddle later, we flopped out of the kayaks, turned on our head torches and slid down the boardwalk into the vast cave mouth. Thingy the guide lead the way to the end of the boardwalk, and then explained about why the cave is known as the “Dark Cave”.  It’s not just because it’s dark in there.  It’s dark in pretty much all caves.  At 400 million years old, the limestone in theses caves is so old that’s it’s no longer pristine white.  It’s now very black indeed. Marine fossils were pointed out, and then we slipped off the boardwalk deeper into the cave. It was all pretty spooky at this point, as we trudged through rivers and across beaches, the light from the cave entrance fading with every step. 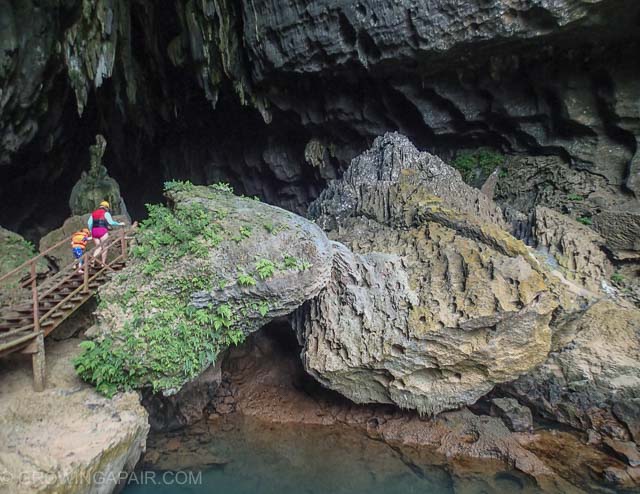 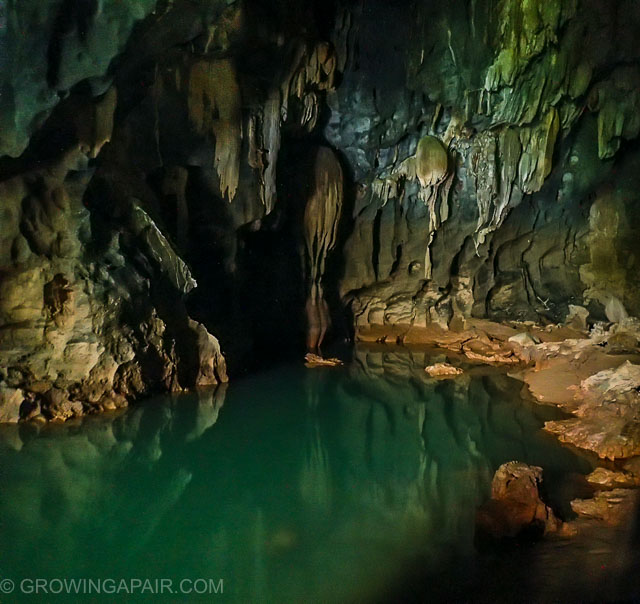 After about five spooky minutes, we regathered and vainly tried to see to the top of the cave with just the light from our head torches. I was honestly expecting us to head back out at this point, having walked much deeper into the cave than I’d have expected for a “suitable for all ages” tour.

But no, this was just the gentle introduction to the delights of the Dark Cave. Life jackets were abandoned, and we marched confidently into a small, pitch black passage, just wide enough for my shoulders, and not quite high enough to stand up in. So this is why we’d been given hard hats… 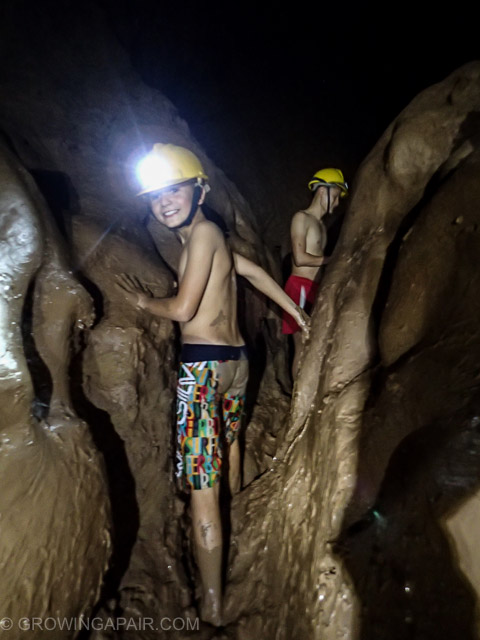 The passage narrowed, and shrunk, and climbed, and ducked, and twisted and turned. And in a change from the beach like terrain of the early cave, the passage got muddy. Then it got really muddy. Up to your knees muddy. Then up to your waist muddy. You’d occasionally find a lone flip-flop in the mud, which is why we all had to come barefoot.  With just the light from your head-torch, the going was slow and precarious. Handholds had to be grappled for and footholds had to be found under the super slippery mud.[the_ad id=”4595″]

Unsurprisingly, the kids coped brilliantly with this bit of the adventure, delighting in getting as filthy as possible whilst scooting up seemingly impossible slopes, and slithering down mud chutes.  Sam, Evan and Megan were chatting and laughing and giggling and blinding everyone else with their head torches.  Fraser, fearless as ever, was dragging his dad through the mud. 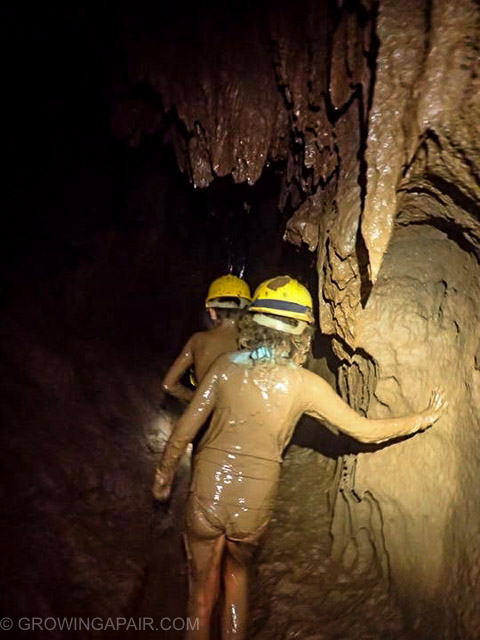 I think the grown-ups spent most of the journey with a general “WTF? We didn’t sign up for this!” expression on their faces.  It was bloody funny though.  It doesn’t matter who you are or how old your are, mucking about and getting seriously covered in mud is a great way to spend your time.

With much whooping and cheering, we eventually made it to the end of the passageway and plunged into a lovely, deep, cooling mud pool. It’s a very weird thing, being 800 metres inside a cave, with just a head torch for light, floating on your back (you can’t actually sink in the mud, no matter how hard you try) watching the kids jump in, splash about and have mud fights. Completely surreal, and not at all what we signed up for.  These are the best adventures to have, the ones that are unexpected and unplanned. 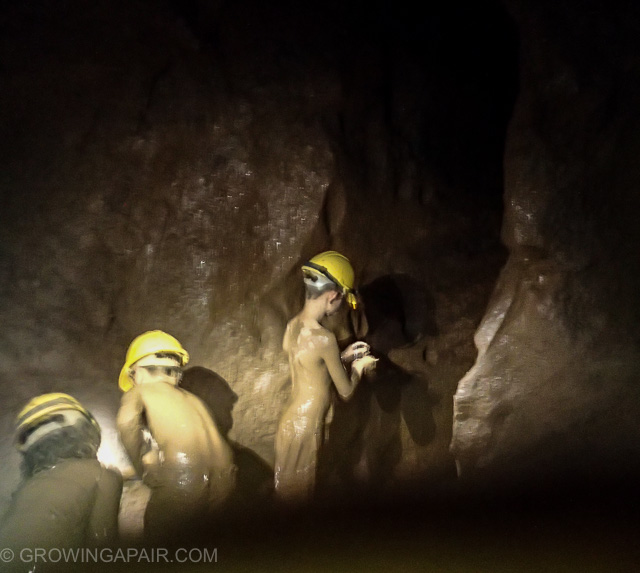 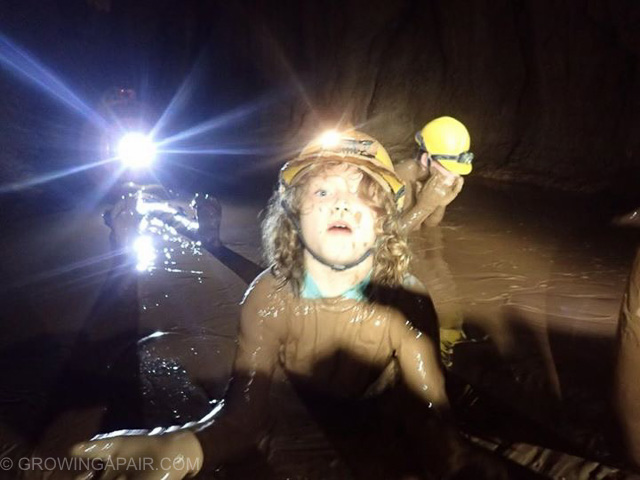 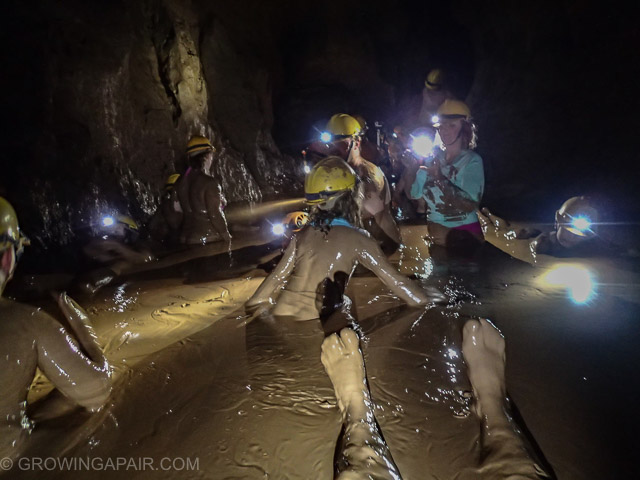 The journey out was just as exciting, but somehow we managed to find a different passageway for the exit.  If I’d known that there was more than one route through the caves, I’d have been all together more terrified of the journey in.  All along I was convinced that getting out would be just a case of following the passageway. Suddenly realising that there were multiple routes through the passages sent a shiver down my spine.

The only way out seemed to be via a mudslide.  Sit at the top, holding onto a rope, shuffle down a bit and then let go.  Whoooooosh! 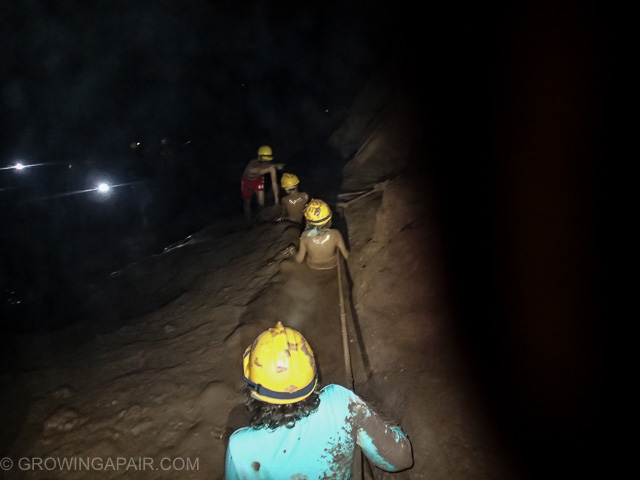 We arrived back at a cold, fresh water lake and tried our best to scrub off the worst of the mud. Well, most of us did. Sam kind of just stood around a bit, timidly splashing himself with the cold water. 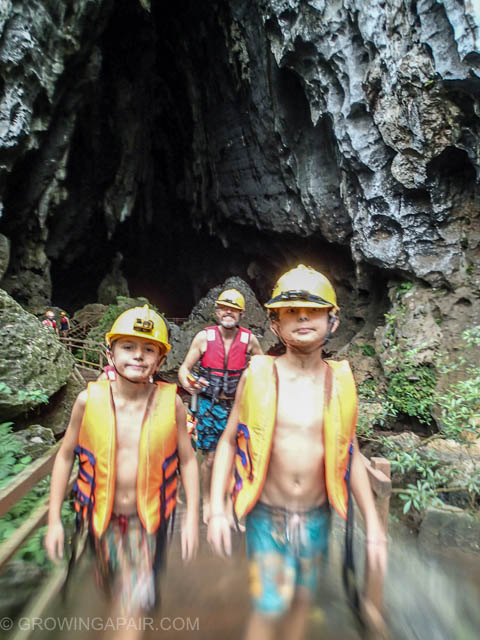 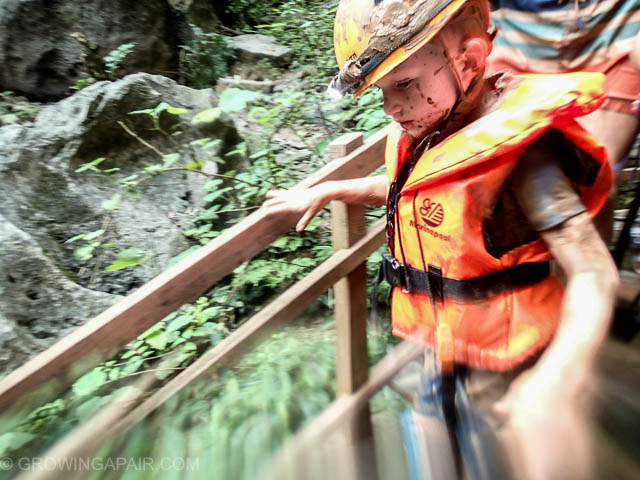 The adventure didn’t stop once we’d got ourselves back out of the caves, we had a happy hour messing about on the river, paddling kayaks, falling into the water from zip lines and jumping off the floating pontoons.  Sam was in and out of the lake nearly enough to get himself clean of the mud.  Evan talked his bravery levels up to giving the zip line a go, and then immediately regretted it as he face bombed into the water 10m below him.  Floss had much bigger regrets, having talked Evan into doing the zip line, she then had to follow through with mock bravery and do the zip line herself.  Unsurprisingly, the famous McAnderson dangerous gene meant that neither Megan or James had any such issues, and happily zipped and jumped and splashed their way into the river. Cat and Fraser had a much more sedate and sensible time of it, befitting their combined ages. And me? Well, I bravely paddled about and took photos. 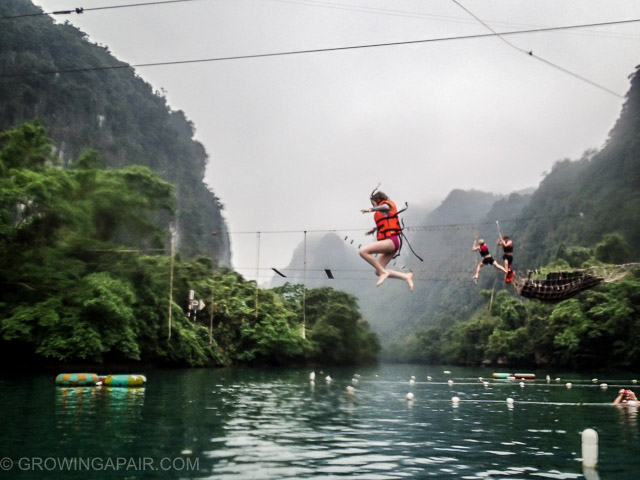 Phong Nha is an epic place!  The trip to the Dark Cave should be on everyone’s bucket list.

I wouldn’t say that it was in any way suitable for all ages, or that it’s anything other than a cave based theme park set in stunning scenery, but if you’ve got a fair bit of mobility left, then it’s time and money well spent. 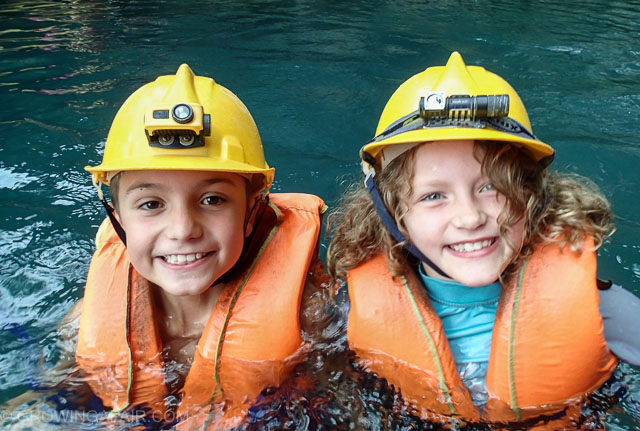 So, the Dark Cave in Phong Nha, Vietnam.  Suitable for all ages?  Not really.  Suitable for hardcore kids and fit pensioners without hip replacements?  Yep.  Bloody good fun?  Absolutely!