Australia is enormous.  Not just big. But off the scale huge. I’ve always thought that it’s quite a long way to Nanna’s house in North Wales from our house near Portsmouth on the south coast of England.  But Australians would consider driving that distance to get to the shops. We’d landed on the biggest island in the world, and were ready for a really big Australian road trip adventure.  Ten days to drive 1000 miles from Brisbane to Cairns in a posh motorhome?  Bring it on…

As all good things do, the adventuring began with a swift beer or two.  We caught up on the UK gossip with our lovely friend Nette from home, who just happened to be flying out of Brisbane back to the UK as we flew in. That was a lovely hour, and it was very reassuring to hear that everything we’d left behind was ready and waiting for us to come back to.  Everyone was missing us.  Obvs!  Who wouldn’t??

Brisbane itself is surprising lovely. I say “surprisingly” as I remember it being a bit rubbish when we were here in 2003. After being away from home for so long, it’s a weird thing to arrive in a place that looks and feels so British but which is completely different. The shops look the same but they have sacred ibis picking up the crumbs instead of pigeons. Queen Elizabeth II is on the coins but the sky is blue and there’s not a cloud to be seen. They have ‘pelican crossings’ just like in the UK, but nobody walks unless the green man is flashing.  Apparently it’s the law here.  We got some funny looks every time we didn’t wait.  Well, the nearest moving vehicle was somewhere near Sydney!   What the hell are you waiting for??

No other place we’ve been to felt so much “same same, but different”, but we all pretty much instantly fell in love with everything we saw. 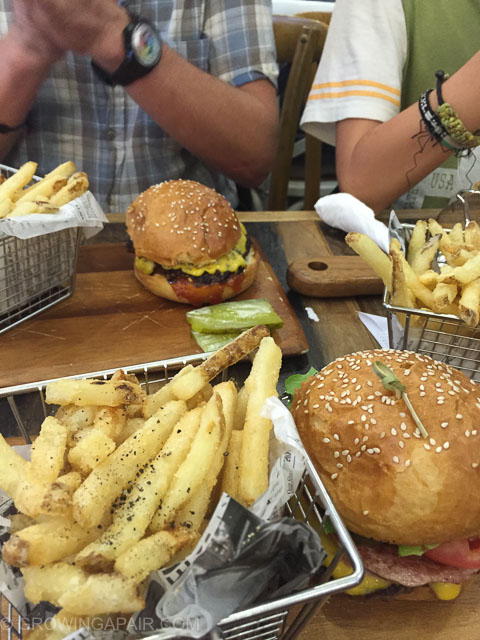 We didn’t have long in Brisbane, and we made absolutely no attempt to see any historic sites or visit any museums. Time was taken with shopping, eating, and pottering about the lovely city centre. Our clothes had been pretty much ‘Asian laundry’d’ to death and we needed replacements and warmer stuff in preparation for our road trip to Cairns.

Almost before we knew it, the time had arrived on the outskirts of Brisbane to pick up our “luxury recreational vehicle” and get on with the road trip up to Cairns. Somewhat surprisingly, we were upgraded by the car hire company and ended up driving out of the depot in something considerably larger than we’d expected. Roughly the size of our first house in Southsea, ‘Tarquin’ could comfortably sleep six, but was only slightly easier to park than number 47. Spirits were high as we hit the Bruce Highway and cruised past the first signpost – only 1600km to Cairns. 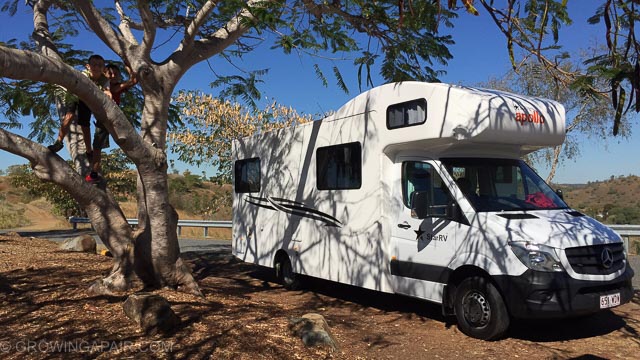 Meet Tarquin! He’s a posh one. 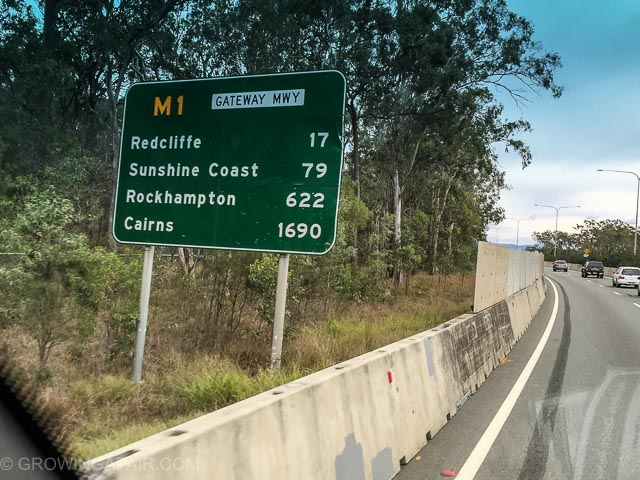 Welcome to the Bruce Highway! We’re off to Cairns.

Road trips are best when you avoid the highway.

We had ten days with Tarquin and, in our minds, those 1600km would only take a couple of hours’ driving each day, leaving lots and lots of time for adventures and general mucking about. And if we’d stayed on the fantastically named Bruce Highway, then that would probably have worked. But the Bruce Highway is like the M6 (sort of), the scenery is great (as long as you’re north of Manchester) but who wants to spend ten days on the M6?  Not us, that’s for sure.

We were soon off the highway and cruising the back roads in proper Australia. Much more spectacular and correspondingly much, much slower.  Breakfast overlooking the islands at Clareview, lunch at Baldy’s Knob and dinner of sausages on a stick on an open fire under the gobsmackingly amazing stars at Chowey Bridge listening to the dingos howling in the distance, are a much better way to spend our time. 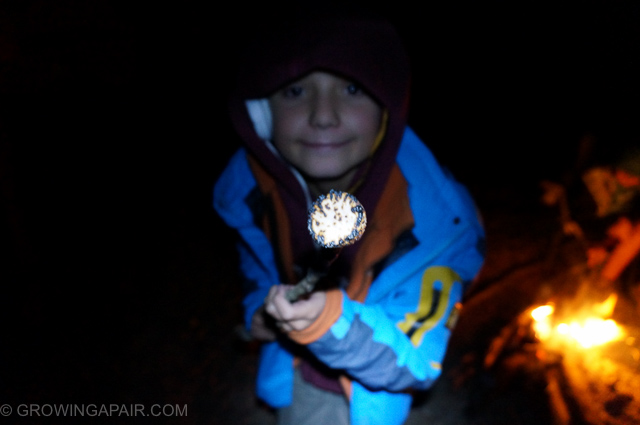 Marshmallows toasted over a fire in the middle of Australian nowhere 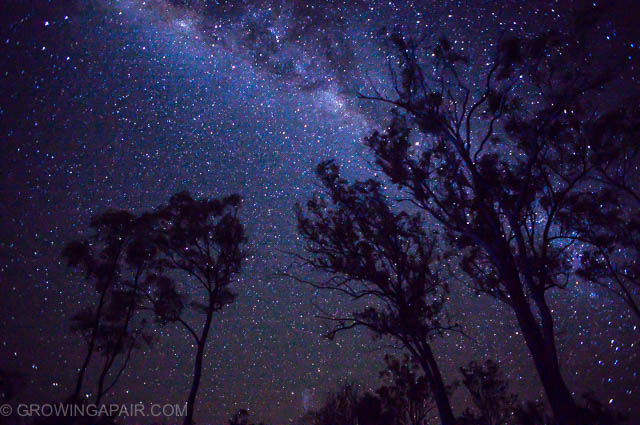 Of course, this pushed the two hours a day on the road up to three hours a day, but that’s a small price to pay I reckon. Oh, and then you have to factor in our inability to navigate. That generally added another hour’s driving. On the upside, the longer we spent cruising, the greater our chances of spotting kangaroos. And indeed, we saw many, many kangaroos by the side of the road, and quite a number in the middle of the road.  In fact, we saw all of the species “kangaroo-us-roadkill-icus”.  Whenever we hit a patch of road thick with dead roos, we’d have the kids scanning the horizon for some live ones boinging around close by.  Our efforts went unrewarded. “Kangaoo-us-still-alive-icus” is a very elusive creature.

It certainly wasn’t all driving though. We had three fantastic days in Airlie Beach, spending a day on the only boat touring the amazing Whitsundays equipped to deal with the 35 knot winds that blew in with our arrival. All the posh sailing ships were stuck in the safety of the harbour as we rocketed out on Ocean Rafting’s enormous 12m rigid inflatable boat, Thriller, and into the massive swell.

I was expecting the kids to be unhappy with the conditions, but the bigger the waves got, the happier the kids were. We were totally soaked and quite bruised by the time we arrived at the iconic Whitehaven Beach.  With the Whitsunday fleet mostly still in the harbour, the place was pretty much deserted, and the massive thunder head clouds racing in over the horizon make the photos much more interesting.

The trip back was even more of an adventure.  With the wind behind us, the boat launched off the top of the waves, crashing into the surf and sending an enormous bow wave straight into our faces. All to a banging soundtrack of Guns and Roses. Amazing fun!

I would definitely recommend Ocean Rafting if you fancy something slightly less sedate than a sailing boat.  This will be a day of memories that, as Evan says, will stay with us to the grave. 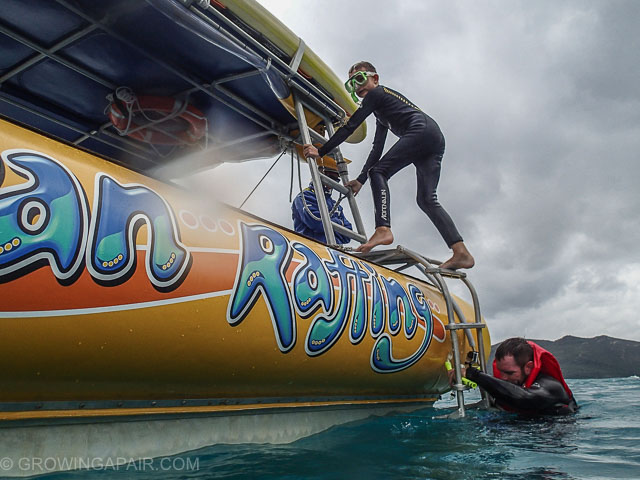 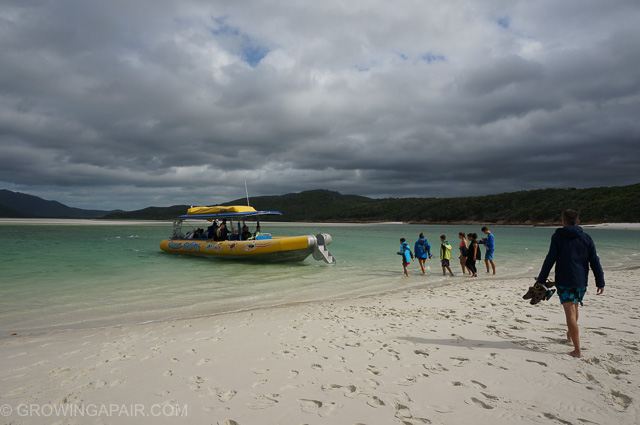 Thriller, 12 metres of blow-up boat with a 500hp outboard and banging music loud enough to drown out the engines! Epic. 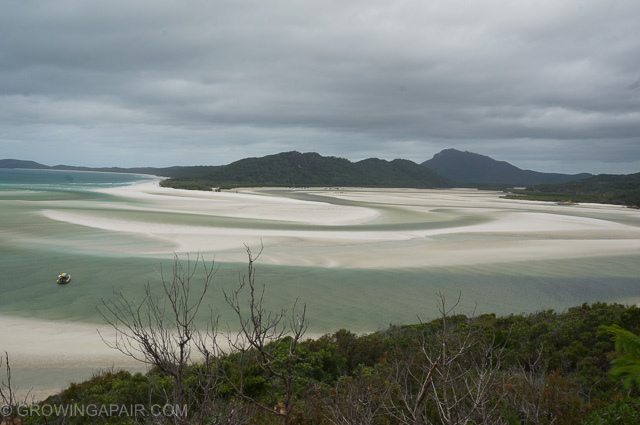 The view from Hill Inlet. 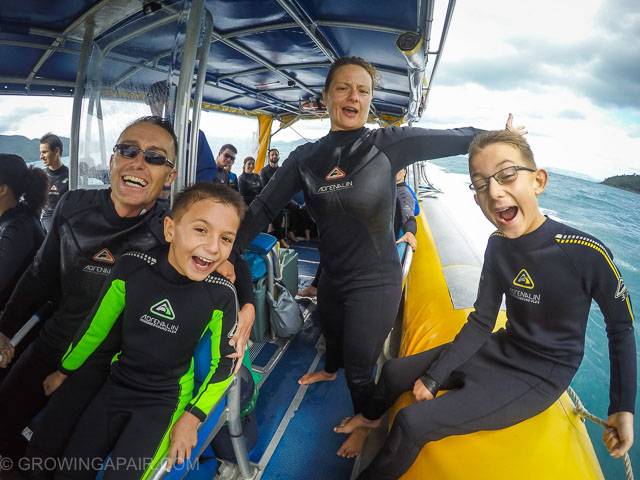 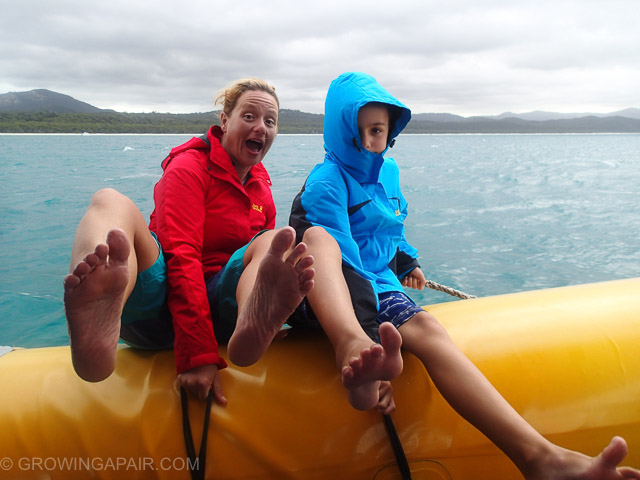 Who wants to sit on the seats?? The tubes are much more fun.

A more sedate adventure was a detour to the entertainingly named town of Mount Morgan (although possibly only hysterically funny if one of your best mates is called Emma Morgan). A scenic breakfast stop was the plan, and indeed, crunchy nut cornflakes were enjoyed overlooking the old gold mine. But on the way out of town, we stumbled across the Mount Morgan Historical Museum and promptly lost two hours learning about the gold mining and the railway that made the town rich. Well, it was rich until the gold ran out at which point it found itself at the end of a railway to nowhere and is now considerably less wealthy, but still very lovely. 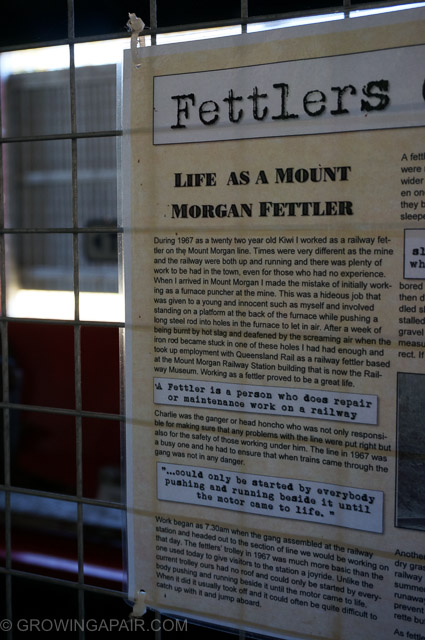 Educational for the grownups (Sam and Evan). Much giggling from the children (Floss and Dez).

Townsville. Definitely not a dump.

Townsville turned out to be an unexpected highlight of the road trip. In a similar vein to Brisbane, I remembered Townsville as being a bit of a dump, but they’ve smartened the place up beyond all recognition in the past thirteen years. There’s an amazing walk along the seafront which is liberally littered with playgrounds, sports areas and a killer jellyfish and shark proof swimming lagoon. And the volunteer-run military museum is just a brilliant way to sneak in a bit of schooling without the kids noticing.  It’s actually really nice and a pleasant place to spend some chilling time.

Our last stop before Cairns was at the very beautiful, but horrifically mosquito infested Murray Falls, an hour or so inland from tarmac. The falls are spectacular and, being 40km off the main road, are pretty remote and therefore we had the place mostly to ourselves. 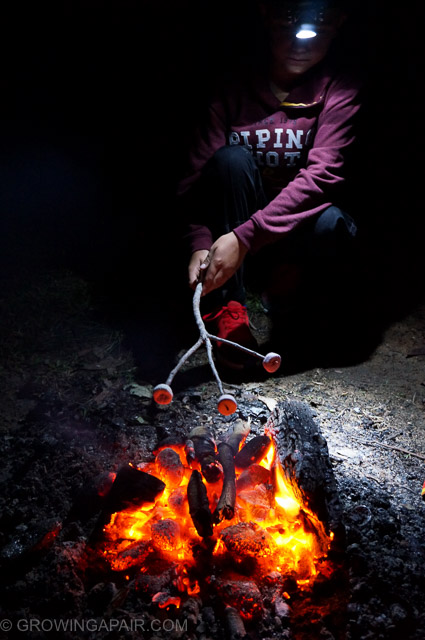 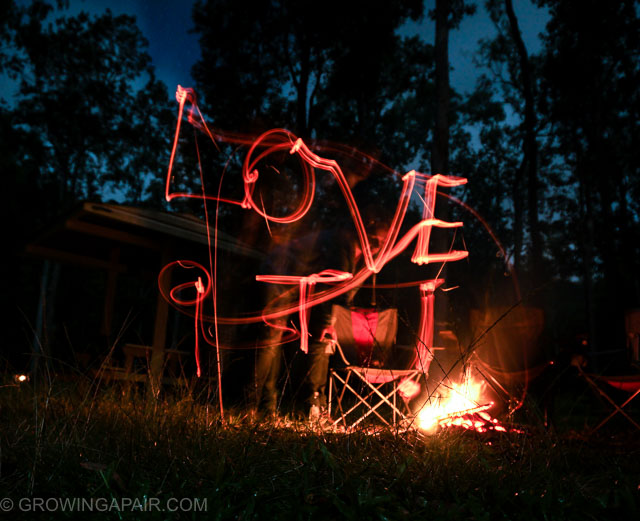 Apart from the scenery, there are two things that made this place memorable for the kids. The first was the fact that my bottom got bitten to buggery by a cloud of evil mosquitoes when I went down to the open air toilet for a poo.  You’ll be pleased to know that there are no photos of that.  And the second was that we caught a fleeting glimpse of an actual wild and fully alive kangaroo.  Or maybe it was a wallaby?  Who cares?  It was alive and bouncing!  Fearful of only seeing dead kangaroos, we’d stopped off at a “sanctuary” just outside Townsville to prove to the kids that kangaroos, koalas, wombats and crocodiles actually do exist. But seeing a wild one boinging through the bush really made the kids’ day. 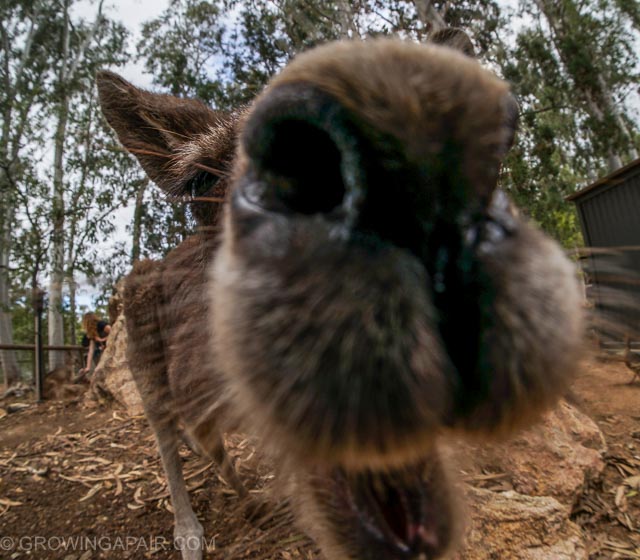 OK, so this one wasn’t strictly wild but photos are easier when they eat food from your hand.

But the memory that will stay with me, and this applies to everywhere we went, will be the warmth, the friendliness and easy going openness of everyone that we’ve met. Townsville is a perfect example of this.  From our campsite, it was a 45 minute walk along the promenade to reach the evening’s food options. Shane, the site manager, had a big night out planned with his lovely lady wife, and offered us a lift into town. Shane and his missus got properly dressed up, and we all squeezed into Shane’s ute, with Evan perched on lovely lady wife’s lap. We were whisked into town with Shane giving us all sorts of useful info about where to go and what to see.

This sort of thing would never happen at home, but it happens all the time in Australia. There’s an innate trust of everyone and respect for everything, which I absolutely love. Everyone has time for a friendly word, and it’s made our time here so far utterly brilliant. The scenery has been epic, the distances have been huge, and the adventuring has been amazing. But it’s the people that have made our time on the east coast just perfect.

And there’s so much more to see.

OK, so ten days wasn’t nearly enough time for a proper road trip from Brisbane to Cairns.  We could have squeezed loads more fantastic places into our ten days on the road, but in the spirit of travelling slowly and chilling, we decided to skip some of the iconic East Coast destinations.  We’ve been to Fraser Island, Mission Beach and Magnetic Island in the past and LOVED them.  I’d highly recommend diving the wreck of the Yongala, one of the most gobsmacking dives I’ve done, for the ENORMOUS groupers and turtles down there.  Sam’s Junior Open Water qualification doesn’t stretch to this dive though so instead we headed to Cairns to dive and snorkel the Great Barrier Reef. 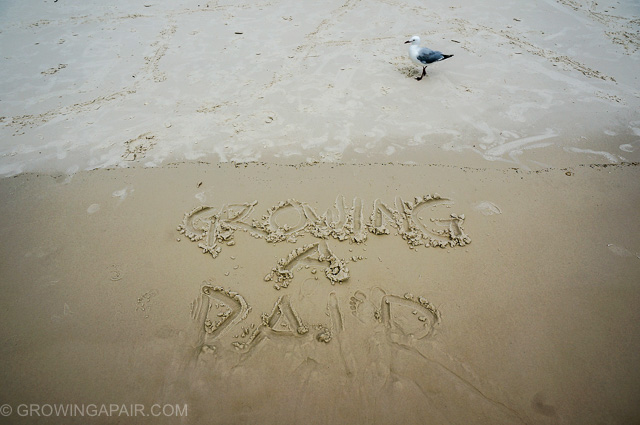