The blurb on Bako National Park in Malaysian Borneo says it has bearded pigs, proboscis monkeys and winged lemurs. I didn’t really expect to see any of these things in the wild.  But I thought we’d have a lovely few days sleeping in a slightly damp hut and going for lovely walks. Bako was the first National Park in Sarawak, opened in 1957. It’s also one the smallest, but almost all the plant species on Borneo can be found here. And it’s only an hour on slightly dodgy Bus No.1 from downtown Kuching. Bargain. 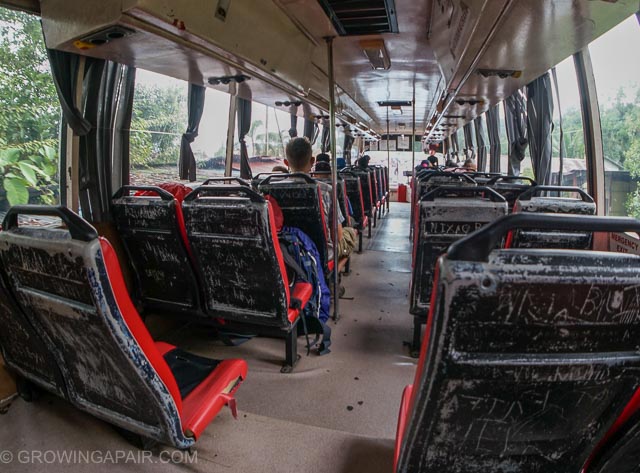 Bus No. 1 from the centre of Kuching. A proper local bus, the best type.

We jumped on Bus No.1 from Kuching to Bako Bazaar, an interesting hour-long journey through some pretty rough looking neighbourhoods and past industrial estates. Then we piled onto a tin boat with an outboard engine, along with six excited locals and sped our way out into the South China sea.

The twenty minute journey took us past amazing Jurassic Park scenery and as we approached the park the monsoonal rains started. By the time we had walked to the Park HQ we were wet to our pants, as were all our bags. We checked into our luxury air-conditioned, two bedroom apartment ( read – damp, slightly smelly wooden hut with a cold shower and geckos for company. It didn’t pass the Pillow Sniff Test.) and there he was – our fist Bearded Pig! Wandering round outside the hut. Fantastic. And even the girls have beards! 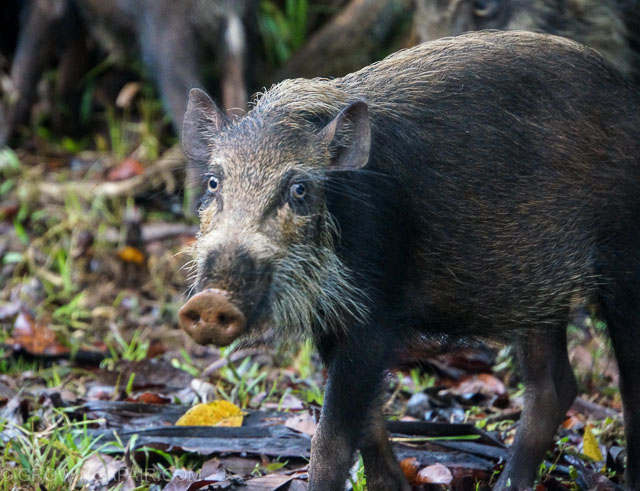 “Who you lookin’ at?” The macaques are scared of the bearded pigs, so I think we should be too.

One of the shorter trails in Bako National Park, Talok Paku is apparently where you are most likely to see the famous Bornean proboscis monkeys. “Yeah, right”, I thought.  It took us along a track (bearded pigs) and across the river to the mangroves (fiddler crabs, mud skippers, multi-coloured chunky hermit crabs), with fantastic views of mountains across the water. The trail was not for the faint-hearted.  This is not a boardwalk, and it heads up through steep jungle covered in tree roots with the odd bit of rickety, slippery boardwalk across streams and up steep rocks.

After an hour and a half of climbing and sliding our way through the jungle (tree frogs, long-tailed macaques) the trail ended on a huge deserted beach surrounded by cliffs and jungle. An amazing sight! 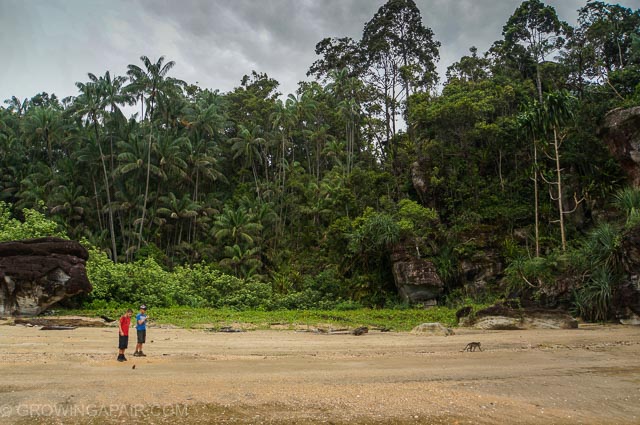 The beach at the end of the Talok Paku trail. Beautiful, idyllic loveliness with resident proboscis monkeys and a one eyed macaque. Special! 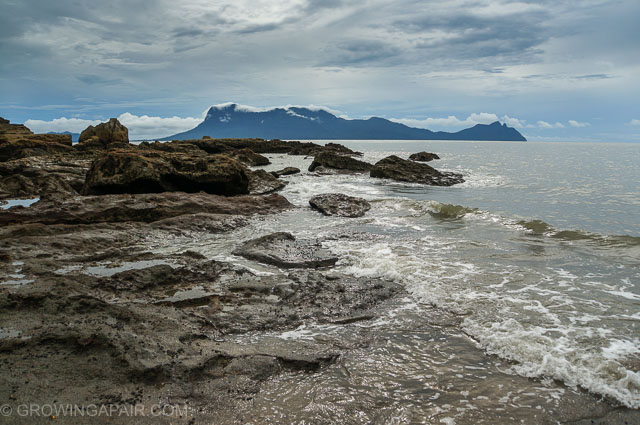 We were followed around for the hour we spent on the beach by a long-tailed macaque with a dodgy eye. Then noises in the trees on the cliff and branches swaying caught our eye – proboscis monkeys! Wow! Quite a way up the cliff but close enough to see clearly. 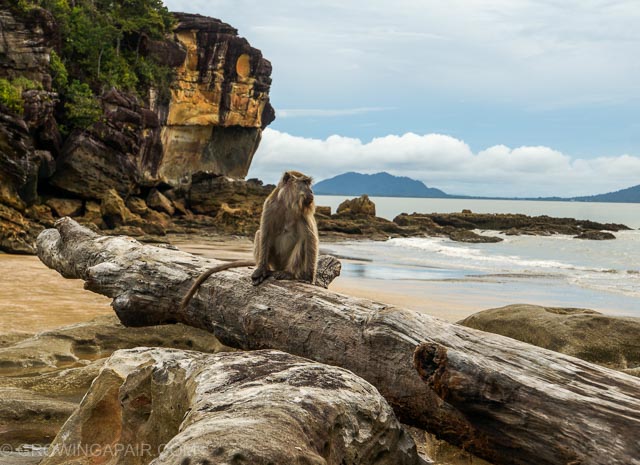 Our one eyed macaque friend on the beach. I spend ages photographing him.

We spent ages exploring the beach, harassing the huge hermit crabs, chasing the mud skippers and chilling with our one-eyed macaque mate. So pleased to have seen those monkeys though. Who’d have thought it?!

And then on the trail on the way back, we were showered with half chewed figs from a tree above us and there he was – another beautiful, floppy-nosed, pot-bellied, lanky-legged proboscis monkey. Right there. Just above our heads. Looking at us. Just gob-smacking. 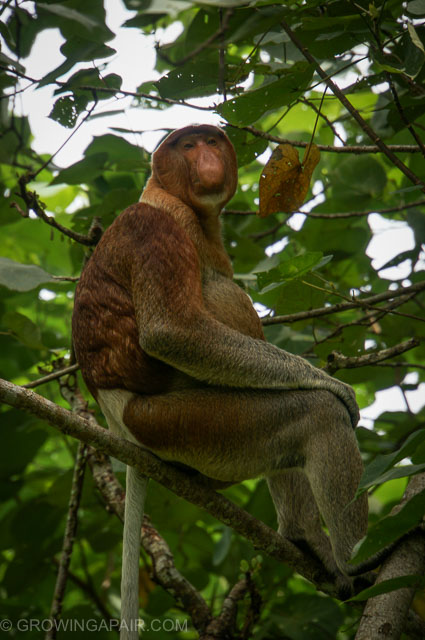 Possibly the weirdest looking monkey in the world. There’s just something so human about them.

We signed up to go on a night-time wildlife spotting walk after dark. Again I wasn’t expecting much, but we’re here so we should give it a go. We stepped out of the canteen to be presented with a bright green pit viper, curled up under a tree, probably digesting a tourist. A few steps along the boardwalk and just outside our cabin, the guide shone his spotlight into the trees. Winged lemurs! What the hell is that all about!? These camouflaged alien beings are bigger than macaques but bounce up the tree trunks like frogs and then let go, gliding to the next tree. What a sight!  Monkeys with wing suits. That has to be the weirdest mammal I’ve seen ever, and I’ve seen proboscis monkeys today! 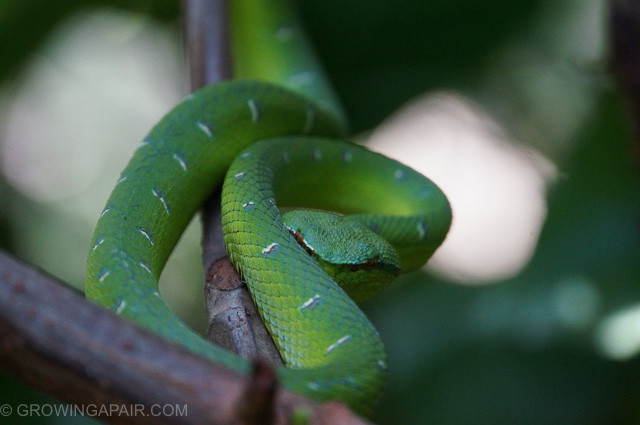 Green pit viper. In a tree near our hut. One bite will probably kill you .

The next hour and a half was spent wandering through the jungle, sometimes on a slippery boardwalk, sometimes not. We saw stick insects, spiders, catfish, sleeping Kingfishers, poisonous frogs, swallows asleep in their nests, huge wingless crickets, a tarantula, a cicada shedding its skin.

As we stood in the pitch black, torches off, admiring the glowing branches of a fern covered in luminescent fungi, Dez whispered “It’s the Eurovision Song Contest tonight, y’know.”.  We certainly weren’t sitting on a sofa drinking a nice bottle of wine and giggling at Graham Norton’s inappropriate comments.

Then on the way back one of the guides shone his spotlight into the jungle. I crouched down and peered through the leaves to see something not much bigger than a large rat with long legs. A mouse deer. Neither a mouse nor a deer, but a completely separate species with three stomachs that hasn’t changed much in millions of years. Who says nature is weird? 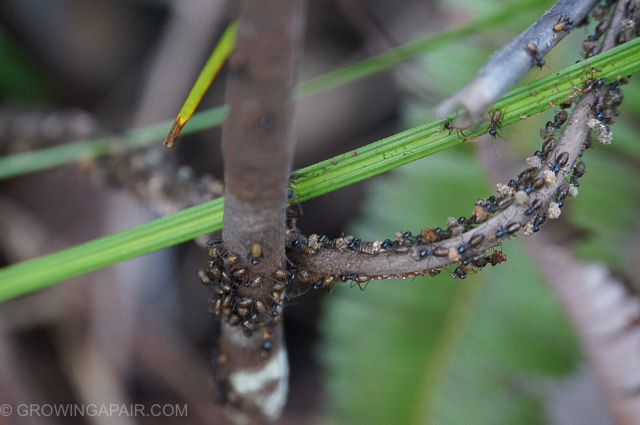 Termites in a long procession to who-knows-where, along branches, up tree trunks and through the jungle

I have to say at this point, I think I am rotting. I can’t see how anyone can sweat as much as I do in this humidity without just rotting away to nothing. I had four showers in one day. One in the morning at the hostel, one when we arrived sopping wet at the park, one after our trail adventure and yet another one after night-time wildlife spotting tonight. I don’t own enough clothes. I only have three bras and they are all full. As soon as I step outside, the sweat starts to run down my body, and down my legs and drip off my chin. Day or night, it doesn’t matter.  I’m definitely going to rot!  You’re welcome!

At 6.30 the next morning, I found Dez sitting outside admiring the pigs and watching the Macaques raid the hut opposite ours. They probably shouldn’t have left a window open really.  They are a scary bunch, the macaques.  We’ve been attacked a few times, once when one of the little sods stole my bra off the line.  Here in the jungle, we are definitely not at the top of the food chain, at least not in the eyes of a lot of the wildlife here! 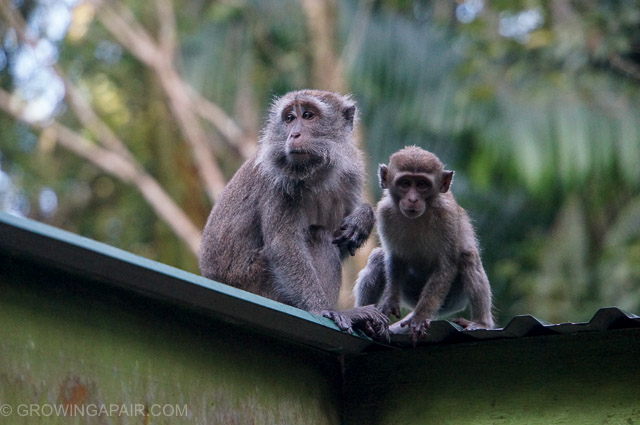 Macaques. Cute, but terrifying if they gang up on you. Don’t let them near the washing line.

Today’s trail was Telok Pandan Kecil, a lovely sweaty hike through jungle and sandy tracks (pitcher plants, termites, snakes) to a massive rocky outcrop above a tropical beach. Just beautiful. The steep stairs down to the beach were worth it, especially as several Malaysian boatmen floated in the bay ready to take us home. The boys were hot and hungry by this time so 35 ringitts was worth every sen, and the boat ride took us past Bako’s Stack Rock and some fantastic beach scenery. 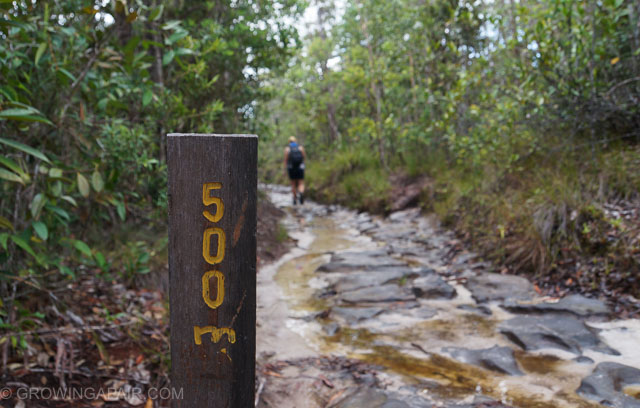 Bako trails are picturesque and sweaty, all at the same time. 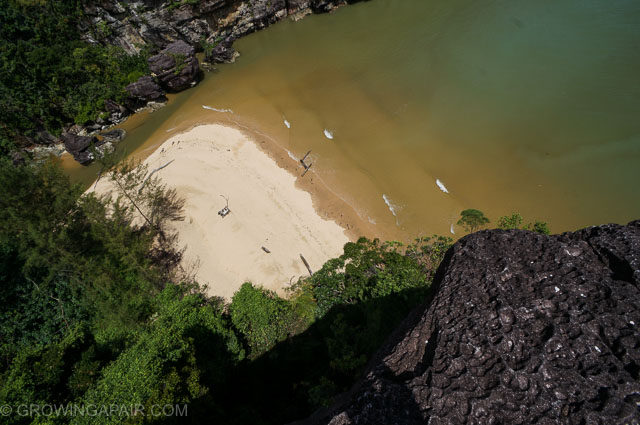 We trekked to this cliff top and then climbed down to this sandy beach. 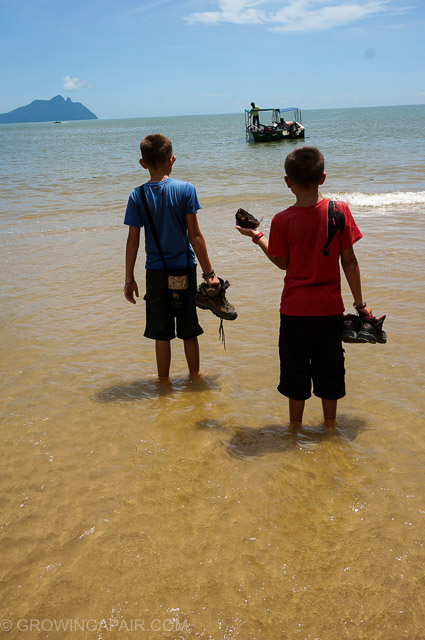 And after chilling on the beach for an hour, got a water taxi back to our camp. 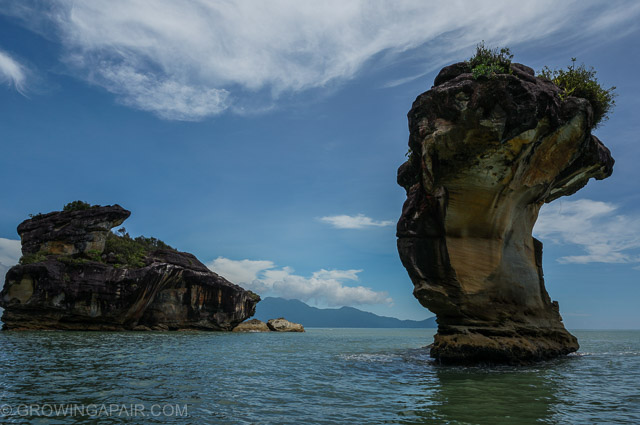 The second trek today was Talok Delima, which took us through deep swampy dark jungle to a fantastic mangrove-covered beach full of hermit crabs, weird flat translucent shells and lizards. The cliff face and boulders here are just amazing. Sometimes I wish I was a geologist. The colours, patterns, shapes and strange circular protrusions are well beyond my geological knowledge. No monkeys here, but we did find lots of horseshoe crab shells!  Now this is exciting!  Shame the sea is brown and clearly not dive-able, even without the croc that is said to be hiding out there just waiting to eat unsuspecting tourists. 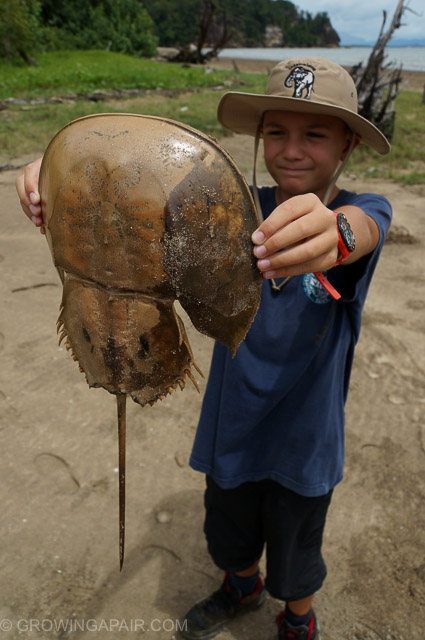 Horseshoe crab shells on the beach.

A word about the noise.  It’s never quiet here.  The forest, trail or beach is alive with noise.  Birds, crickets, cicadas, frogs, monkeys and countless other creatures are constantly chatting away.  It gets even louder as the sun sets.  I tried and get the kids to stop and stand still for a moment, every now and then, close their eyes and listen. There’s so much going on.  Obviously they think I’m mad, but maybe one day they’ll get it.

Other excitement for today…. the boys found the pit viper that we saw last night. Not sure that they should have been searching in that particular tree for a highly poisonous snake, but I got a photo and they’re not dead. What’s not to love? Also the slightly freaky winged lemur from last night’s walk was in the tree again. And OMG it’s weird!  Check out the photos below. This thing crawls up the tree like something off of Alien and it’s wing bits are camouflaged to look like the tree bark. I can feel nightmares coming on tonight. It’s just outside our hut. Still, I got a photo…. 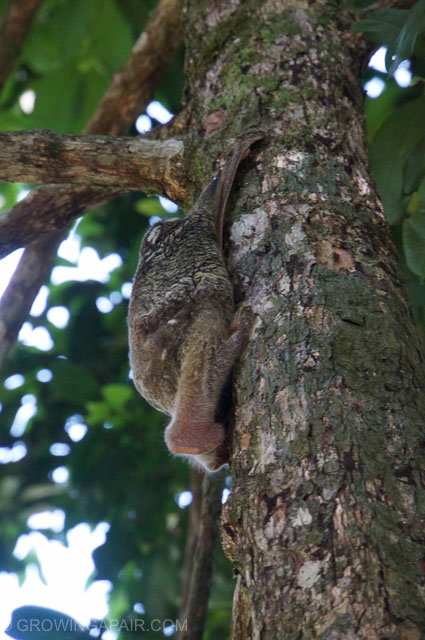 Hide and seek…..The remarkable camouflage of the winged lemur. 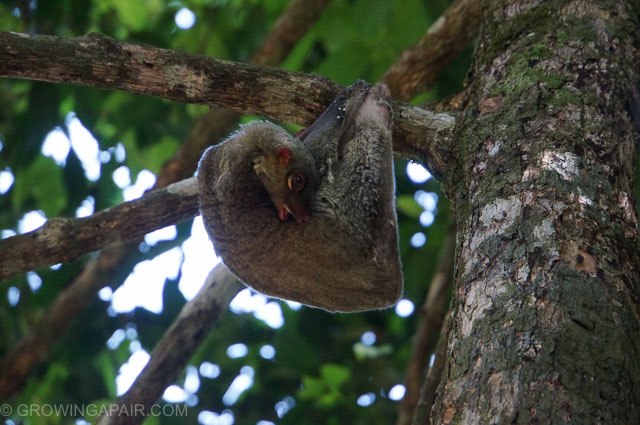 I also got a photo of the cross-dressing macaque who stole my bra off the washing line. I grabbed it back, but then seven of his macaque mates joined in and I had to call Dez for help. Luckily monkeys here recognise a stick, and we managed to scare them off but that was quite terrifying for a moment. 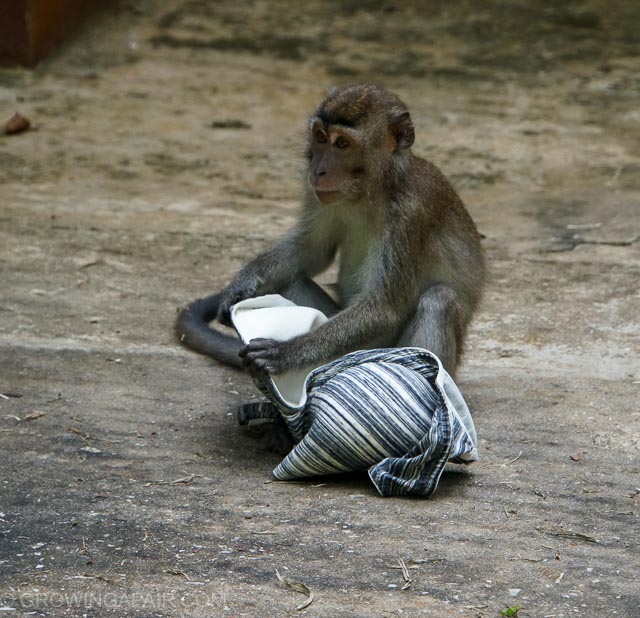 The sunset that night was awesome too. But after some food, a few games of Uno, we were all tucked up in bed by 8.30pm, knackered, slightly sunburnt with aching quads (or is that just me?). To be honest the boys seemed fine and full of energy, but I was exhausted and Dez could barely keep his eyes open!  Too much excitement for us oldies, obviously.

Our last morning was spent chilling and looking at more amazing Malaysian wildlife. We found the elusive silvered leaf-monkey and, just as we left, three proboscis monkeys bounded past us and up a tree. I’m sure you get accustomed to this if you work in the park but after three days here it’s still amazing to me.

The weather changed just as our boat back to relative normality was due. The wind got up, the clouds rolled in and the sea got pretty choppy. The boat ride back was wet and bouncy. It was also full of Malaysian families sobbing and looking terrified, and four soaking wet British people in the front seat, arms in the air, shouting “Faster! Faster! Woooohooooo!”. 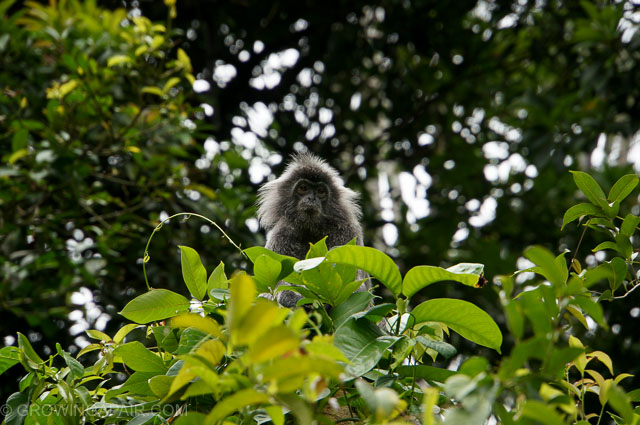 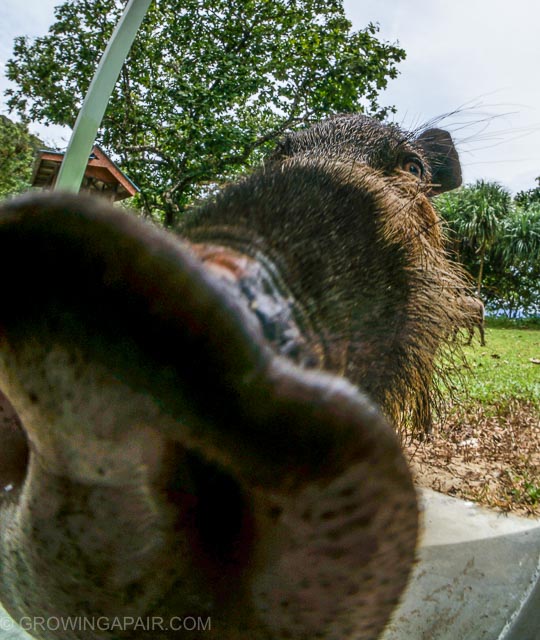 Maybe bearded pigs aren’t so scary after all…

I think the most amazing thing about Bako NP is that it’s just teeming with life. Wherever you look there is some kind of creature going about it’s business. From monkeys and dragon flies to hermit crabs and pigs. These haven’t been introduced here, they are the native species that has thrived here since 1957.  Nothing is scared of humans because it has had not reason to be.  It’s almost like this is what planet earth would be like without humans. I find that quite sad really. Thank goodness for the world’s national parks. If we’re not careful the whole of South East Asia will turn into one massive palm oil plantation.